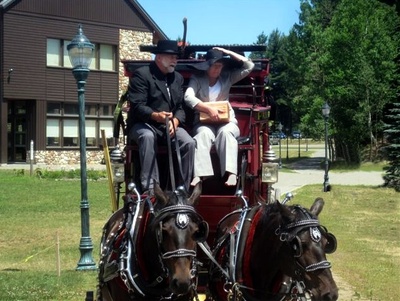 At Gould Hoyt's funeral, July 8, 2012, his ashes were carried on an original Paul Smith's Hotel stage coach driven by Bob Brhel, and carried by Brehl's wife. Courtesy of Mary Hotaling

SARANAC LAKE--Former Paul Smith’s College forestry professor Gould Jennings Hoyt, Jr. died peacefully on June 26, 2012 at Will Rogers in Saranac Lake at the age of 90 after battling cancer. Originally from Norwalk , Connecticut, he was the son of Gould Jennings Hoyt, Sr. and Gertruyde Marie (Petrie) Hoyt. On August 28, 1948 he married Florence Ruth Klein, who survives him. They raised two children, Jane Hannah Hoyt Baloras of Miami, Florida and Edward Henry Hoyt of Paul Smiths, both who survive him. A sister, Jean Balla predeceased him. Another sister, Mava Gertruyde Hoyt Pekar, survives.

Hoyt graduated from high school in Norwalk in 1937. He graduated with a B.S in 1947 and M.S. in 1948 from the N.Y.S. College of Forestry at Syracuse University. A boy scout Eagle Scout and Rotary Club Troop Leader, he had been a member of the Society of American Foresters since 1950.
He served as a member of the U. S. Army Signal Corps from 1942 to 19445 after being trained as a radio technician. He was deployed overseas as a part of the advance team to prepare battle sites for radio reception during the Allied advance across Europe. His tour of duty took him to England, France, Holland, Luxembourg, Belgium, and Germany. He was decorated with the American Service Medal, Good Conduct Medal, European-African-Middle Eastern Service Medal, and the World War II Victory Medal during his three years of military duty.

After he returned to civilian life, he completed his college degrees and was hired to teach forestry at Paul Smith’s College in 1952. During his tenure there he taught forestry, silviculture, dendrology, sugarbush management, draft horse management and many other courses, retiring in 1983. He was long- time advisor to the Forestry Club and was instrumental in building the Forestry Club Cabin. This multi-year project involved students, alumni and other faculty, all working, building and learning under his leadership. In 1955 he initiated, then coached, the highly successful Paul Smith’s College Woodsmen’s Team until 1992, long after his “retirement .” A true forester, he was also proud emcee for "Timber Sports" at Woodsmen's Competitions in
Boonville and all over the Northeast for more than 50 years.

For many years he maintained the college’s draft horses. He began the horse-logging program at the college with one horse in 1962. By 1963, two more draft horses had been added, and the program has been sustained ever since. Hoyt instructed thousands of students in the effective, hands-on use of horses in logging operations.

Hoyt ran the college’s sugarbush operation for over 20 years. He continued to be involved with the college after retirement as advisor to the Forestry Club. He spent time working with students and staff to garden in the original Paul Smith’s Hotel gardens near the campus soccer fields, something he had done every year for 55 years, longer than any other faculty member. The garden is now called Gould’s Garden, in his honor.

Hoyt was elected to be sole trustee to the local Keese’s Mills school in 1954; he also served a term as Town Councilman on the Brighton Town Board. In 1987 Hoyt was the Grand Marshall for the Saranac Lake Winter Carnival.

A highlight for Gould and his wife Ruth had been the painstaking restoration of the famous 1868 Paul Smith's Hotel Concord stagecoach. It will be that same coach that Professor Hoyt will ride in once more, during his memorial service on July 8th.

Students and alumni from PSC will remember Professor Hoyt fondly, and will miss his booming voice, wool pants and suspenders, and confidence in the field. Hoyt projected a faith into his students that gave them the courage to reach expectations they thought to be impossible in themselves. He was proud of and popular with these students, several of whom were able to be with him in his last days.

His friends and neighbors will miss the immense knowledge of the area and history of the college he carried with him. He was always ready with a story to entertain you. He inspired learning and appreciation for both nature and history, was a dedicated husband to his wife Ruth, and a mentor to generations of students.

A celebration of Gould Hoyt's life will be held with a funeral procession led by the Paul Smith's College Stagecoach at 11:30 a.m., Sunday, July 8th, from the Joan Weill Student Center around the campus to St. John's in the Wilderness Cemetery. A graveside service will begin at 1 p.m. A reception on campus hosted by PSC will immediately follow. Arrangements have been entrusted to the Fortune-Keough Funeral Home in Saranac Lake. Family and friends can share their memories and sign the online guest book at fortunekeoughfuenralhome.com.

For his many students and friends, they will continue to aspire to do things "The Hoyt Way."