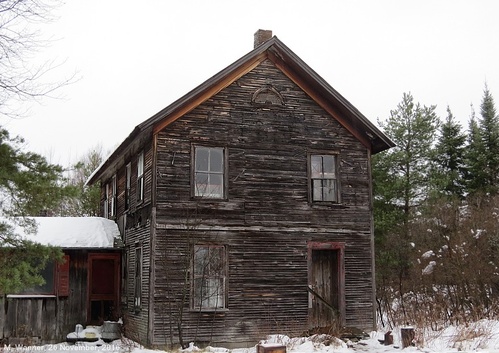 Hawkeye's house in Gabriels had no running water and little insulation.Born: September 13, 1932

John Whitney Hawkinson was an antique collector living in Gabriels, specializing in antique vehicles. He graduated from Paul Smiths College in 1954.  He was a great-grandson of Amos Whitney of Pratt and Whitney.

Widely known as Hawkeye, he worked summers at Lone Pine Camp, driving and maintaining the 1933 REO Speed Wagon that was used to take the campers on mountain climbing trips. 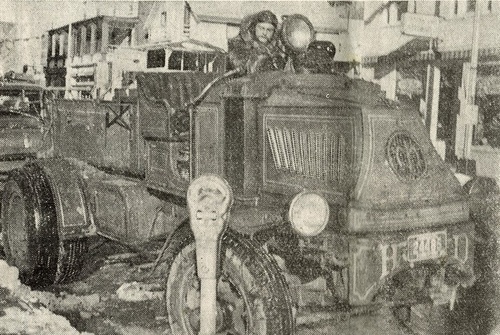 Adirondack Daily Enterprise, December 1, 1961.
John Hawkinson of Saranac Lake pulls into the village after a 300-mile journey at 14 miles an hour, in his huge, old Mack Bulldog: (vintage of 1919). The truck was part of the early century Hartford, Conn, fire equipment. Hawkinson will restore the mighty Mack to its former glory. He has offered it to the Saranac Lake Ski Club for hauling its winter carnival float.
Courtesy of Mary Hotaling. 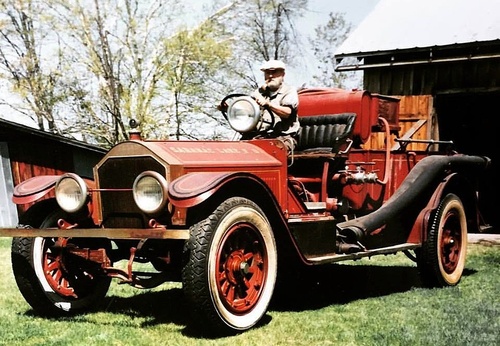 Hawkeye at the wheel of the 1923 American LaFrance firetruck that bought from the Saranac Lake Fire Department in 1962; it was returned to the village by his estate in 2016.
Courtesy of TheHawkeyeFarmIn 1962 he bought Saranac Lake's 1926 American-LaFrance fire engine, which is said to be still in good running order. It was returned to the Saranac Lake Fire Department by his estate in October, 2016.  He also bought a 1928 Peter Pursch fire truck from the town of Keene in 1961, and sold it back to the town's fire department in 1985; a news account noted that after being in storage for 24 years, the truck started up in less than 60 seconds.

In 2003, he was operating a garage previously operated by Earl Martin.

At his death he left 43 antique vehicles, including cars, tractors and fire trucks, none newer than 1931.  According to the terms of his will, they were sold and the proceeds given to the Adirondack Chapter of the Nature Conservancy and the New York Historical Society. 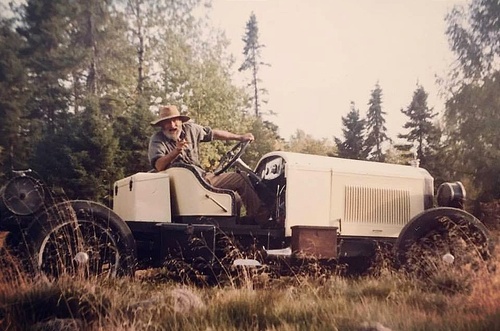 Hawkeye and his '27 Buick. He called it the "Hawkeye Special." According to the registration documents, the former owner was William A Rockefeller.
Courtesy of TheHawkeyeFarm Adirondack Daily Enterprise, January 23, 1962

A number of horses and sleighs have been procured for the carnival week, John Hawkinson, who has taken charge of this phase of the events, said. Dogs sleds are being checked.

An offer of sleighs and horses for the carnival was made by John Hawkinson who expressed the feeling that the events should try to capture the spirit of the past which would attract people from outside and be enjoyable for local residents as well.

John Hawkinson of the Harrietstown Road was high accepted bidder of $250 on the 1921 American-LaFrance fire truck owned by the village. One other bid of $200 was received. 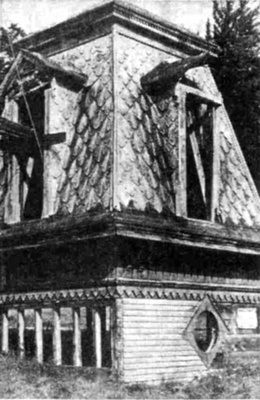 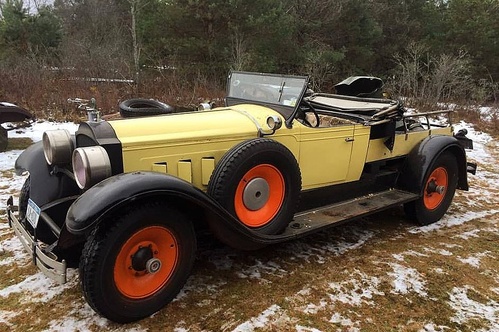 This 1929 Packard 443 super 8 was one Hawkeye used frequently, around Saranac Lake and up and down the east coast.   Courtesy of TheHawkeyeFarm  Adirondack Daily Enterprise, August 28, 1970

Local Antiquer with Cupola Wants House to Put Under It

The historic cupola which topped the Loon Lake Hotel annex is looking for a home and the present owner, John Hawkinson would like it to go to a museum.

John is a somewhat museum-minded individual himself whose domicile on the Harrietstown Road is full of antiques. The trouble with the cupola is that it is sitting on the front lawn at Loon Lake and the property owners around the scenic driveway would like it moved to a permanent site in somebody's garden or as an artist's retreat. 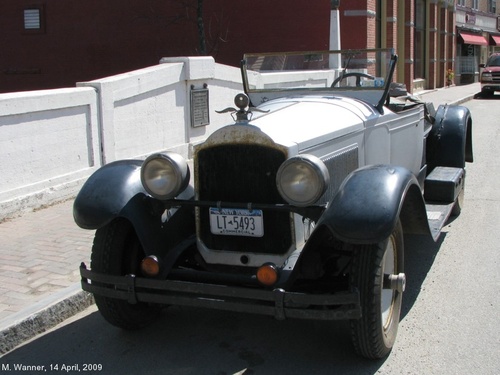 Another of Hawkeye's frequently used cars, a 1928 Packard, parked on the Broadway bridge.It is the type of problem that John is having trouble solving by himself as the tin-roofed ancient architectural wonder is about 25 feet high and 10 feet to the side. The basic craftsmanship is termed "superb" by those having knowledge of such things. It was built in 1873 to adorn the annex which was torn down recently.

The cupola was topped off with a weather vane of copper or brass and was an antique that John just missed acquiring on a bid arrangement and timing. One of the workers had risked his neck 100 feet in the air sawing the metal stanchion which held the weather vane in place and lowered it to a waiting and anxious new owner who had beaten John to the scene by minutes.

A cupola was originally intended in the architectural sense to be functional as a belfry, lantern or belvedere and were of ornate design. Some were octagonal or hexagonal masterpieces with silver domes to reflect the sunlight.

The photo accompanying this story shows the shape of the annex cupola as it stands today. John has some money in it but not enough to prevent it from going to a museum with his compliments.

And he is still a little angry that they tore down the hotel annex to begin with as it would have made people more appreciative of early America's hotel industry revealed in the design of the Loon Lake Hotel buildings.

The late John "Hawkeye" Hawkinson '53 was featured on the television show "Chasing Classic Cars" last March after the show's producers discovered a rare 1930 Minerva among the vast collection of vehicles he left behind in a barn in Saranac Lake.

The host, car collector and restorer Wayne Carini, and his friend Ralph Marano filmed the episode on Hawkinson's property in October.

"Who knows if Hawkeye understood that when he purchased the Minerva in 1959 at a price of $1,000 that in the next 58 years the car would rise in value by 300 percent," Carini said. "Even if he did know, I am sure he wouldn't have cared. I think for him the value was in the ownership of the Minerva rather than its financial worth."

Hawkinson had a strong knowledge and extreme passion for classic cars -- which was evident by the more than 40 antique vehicles, including tractors, fire trucks from local fire departments and vehicle chassis, he had stored in his barns. He died last year at the age of 83. His entire collection was sold, and the proceeds were donated to charity.

A highlight of the episode is available online at https://watch.motortrend.com/tv-shows/chasing-classic-cars/videos/hawkeyes-minerva

2012-08-09 10:05:21   I am looking for Hawkeye and would like to get in touch with him regarding a mutual friend: one Tudy Kenyon. He was a great friend of hers for many, many years. I only met Hawkeye brieftly one time in her driveway in Aurora NY. I am in posession of many letters that he wrote to her over the years and a multitude of pictures. I was told he would like to have the letters back. Such a special and poetic soul he is. I realize he may not still be alive or is 80 years old. i have old addresses for him. but the last letter he wrote he was recovering from a bad accident in a rehab hospital. to you have any information you can give me about him? it would be greatly appreciated. Thank you Virginia Sorrell. 39679 Bar 30 Road, Reedsville Ohio 45772. email is [email protected]!windstream.net