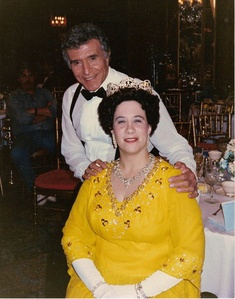 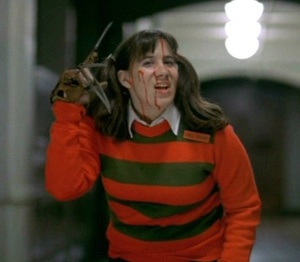 Daughter of pharmacist Howard Hoffman and his wife, Bertha Hoffman.

Leslie Hoffman grew up in the beautiful Adirondack hamlet of Saranac Lake (population 5000) in Upstate New York. The Town is famous for being the original site of the Will Roger's Memorial Hospital. As a child, she used to play at the William Morris Playground. Little wonder, she knew that someday she too would be an entertainer. She also has a deep love for the NVA that later would be changed to the Will Rogers Hospital.

Leslie took gymnastic and ballet classes and was performing on stage by the age of four. Her Teacher was Mrs. Sargent (Gladd). She also went to Fokine Ballet Camp and Sokol Gymnastic Camp. Later, she attended acting classes at the American Academy of Dramatic Arts and the Herbert Berghof Studios in New York City. This is when she discovered acting to be too slow for her, action was what she desired and that meant becoming a stuntwoman.

In the mid 70s, she discovered Paul Stader's gym in Santa Monica, California. There, Leslie practiced high falls, fights, fencing, etc. Less than two years later, she was able to join SAG on her first union job Two-Minute Warning (1976) and has supported herself ever since. She was the first "voted in" member of the "Society of Professional Stuntwomen". During this time, she worked on such shows as "The Love Boat" (1977), "Fantasy Island" (1977), 1941 (1979) and "M*A*S*H" (1972).

The 80s, Leslie was the first stuntwoman elected to the Board of Directors of SAG, the AFTRA Local Board and AFTRA National Board. She was the National Chairwoman of the Stunt & Safety Committee and the Co-Chair of the Young Performers Committee. She was sent to Sacramento to testify in possible changes to the Child Labor Laws after the "Twilight Zone" incident. Leslie was the first stuntwoman to join Women In Film. She was Doris Roberts regular stunt double on "Remington Steele" (1982), as well as working on shows like "CHiPs" (1977), A Nightmare on Elm Street (1984) and Airplane! (1980). During the 90s, she continues to work as a stuntwoman and stunt coordinator. She has coordinated projects such as the ABC Afterschool Special, "Me and My Hormones". This was Melissa Gilbert's directorial debut and starred Robin Strasser and Marion Ross.

In the 90s, she was a member of the Stuntwomen's Association. She worked regularly on "Star Trek: Deep Space Nine" (1993) and "Star Trek: Voyager" (1995). This also included being an assistant stunt coordinator for Dennis Madalone, the Stunt Coordinator of both "Star Trek" shows. She was also Roxann Dawson's "Torres" regular double on "Voyager".

Leslie gives back to the Industry by giving seminars on safety to various unions, film organizations and film colleges. Along with Brianne Murphy ASC, she did a seminar in cinematography at the Native American Film Festival in Santa Fe, New Mexico. In the AFTRA-SAG Young Performers Handbook, she wrote the chapter on safety. She has been interviewed extensively on the radio and in published articles. In the 1996 book, "Burns, Falls and Crashes", written by David Jon Wiener, you will find Chapter 13 is dedicated to her work.

Her stunts are widely recognized such as her doubling Queen Elizabeth II going down the banquet table in The Naked Gun: From the Files of Police Squad! (1988). Last year, she worked on Wes Craven's Scream 2 (1997). Recently, she finished working on Universal's feature Mystery Men (1999).

She appeared at Special Events for "Nightmare on Elm Street".   Also she has gone to events honoring Wendie Jo Sperber's  "I Wanna Hold Your Hand" and "1941", she has been guiding her nephew Ritchie Hoffman in his career as an Actor. Ritchie is Charles Hoffman's oldest son. Charles is Leslie's  younger Brother.

In 2010, Leslie was invited to London to do a Convention where she signed pictures of herself from Star Trek and Nightmare on Elm Street. When she talks to people somehow she always lets them know she grew up in SARANAC LAKE!!!!!!

For a list of her TV and Film Credits:

In 2016, she moved back to Saranac Lake.  She is the Historian of the Saranac Village at Will Rogers.  She is also a Board Member of the Stevenson Society of America.

2019 Leslie Hoffman included in the Book "Hollywood her Story" 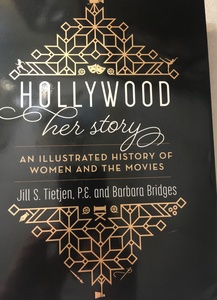 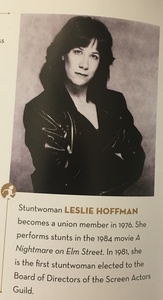 Stuntwoman to join Walk of Fame 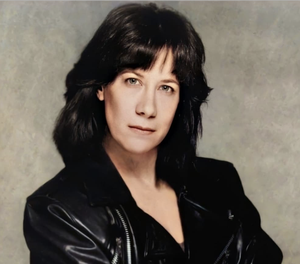 Leslie Hoffman of Saranac Lake poses for a publicity photo during her career as a stuntwoman. (Photo provided)

SARANAC LAKE — Leslie Hoffman spent 25 years getting punched, shot and thrown down stairs in a stunt career that’s now landing her on the Saranac Lake Walk of Fame.

Hoffman grew up in Saranac Lake and moved to Hollywood in the 1970s to become a stuntwoman for movies and television shows. She didn’t have starring roles, but she doubled for them.

She can be seen in “The Naked Gun” getting tackled across a banquet table, dressed as Queen Elizabeth II of England; being dropped on her head by Tim Curry and Christopher Lloyd in “Clue;” and rolling down a staircase as the Cardassian Mila in “Star Trek: Deep Space Nine.”

She became one of the top stuntwomen in Hollywood and made history in the 1980s when she became the first stuntwoman elected to the Screen Actors’ Guild Board of Directors. She also became the national chair of the Stunt and Safety Committee and the co-chair of the Young Performers Committee.

She now lives at Saranac Village at Will Rogers, an independent senior living community in Saranac Lake. 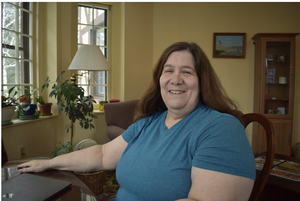 Leslie Hoffman smiles in her apartment at Saranac Village at Will Rogers in November 2019. (Enterprise photo — Griffin Kelly)

In April, Gail Wrenn, a fellow resident of Will Rogers, circulated a petition to have Hoffman inducted into the Walk of Fame.

Wrenn learned about Hoffman’s stunt career through talks they’ve had. Wrenn wanted Hoffman to have recognition for her accomplishments and wanted to see a Saranac Lake native who had a successful career in Hollywood featured on the walk.

Leslie Hoffman plays a hall monitor turning into killer Freddy Krueger in a dream scene from the movie “A Nightmare on Elm Street.” (Photo provided)

She said Will Rogers is a “treasure chest of people.”

“There are many people here who are amazing, but Leslie stood out among them,” Wrenn said. “It was just mind-boggling to me that this hadn’t been done before.”

On April 26 the village board approved Hoffman’s place on the walk.

Hoffman said this is a “great honor.”

A bronze plaque with her name on it will be placed somewhere downtown. Where that plaque will go is yet to be decided. Hoffman would like it to go on the Hotel Saranac because she spent a lot of her childhood there and feels connected to the historic building. 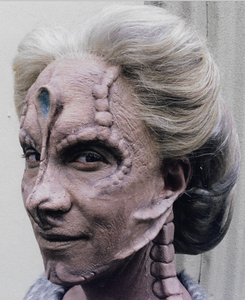 Leslie Hoffman is made up as the Cardassian Mila in “Star Trek: Deep Space Nine.” (Photo provided)

Her earliest memory at the hotel was visiting the barber Gus Nyberg in his ground floor barbershop. She didn’t have much hair as a small child, and her mother had Nyberg shave her short hairs to stimulate growth. It must’ve worked because to this day Hoffman sports long, flowing hair.

Throughout the years she celebrated her brothers’ bar mitzvahs there and saw her father, an avid bridge player, play with his club at the hotel.

Hoffman says she didn’t mind returning to her hometown.

“I think there’s a strange thing about Saranac Lake,” she said. “People growing up here, some of them can’t wait to get out of here, but then they get older or they get into the ‘real world’ and they go, ‘Wow, the magic of Saranac Lake is amazing.'”

Anyway, she said she prefers blizzards to earthquakes. She can bundle up for a blizzard, but with earthquakes, which commonly happen in the morning, “You get to ride your bed around the room until the room stops shaking.”

In fact, she was born on a bitter cold day. Jan. 21, 1955, was a frigid one. The Enterprise reported temperatures ranging between minus 15 and minus 35 that day. It was so cold the Hoffman family car wouldn’t start, but her father’s pharmacy delivery truck did.

“I was delivered to the Saranac Lake General Hospital in a delivery truck,” Hoffman said. She finds this very amusing.

Growing up in Saranac Lake, Hoffman thought she wanted to be an actress. She performed in the theater at the Odd Fellows Hall on Main Street where the Hotel Saranac parking area is now.

“My dream was to become an actress and if I got sick, I would come back to Will Rogers Hospital,” Hoffman said.

Will Rogers at the time was a hospital for entertainers.

When she visited her brother in California, and saw the Wild Wild Wild West Stunt Show on the Universal Studios Tour. She saw cowboys getting shot, throwing punches and falling off buildings.

Will Rogers Memorial Hospital closed in 1975 but reopened in January 2000 as the independent living facility.

“Will Rogers closed, then Will Rogers opened again … so in a way, my dream came true,” Hoffman said.

Hoffman fondly remembers her years of taking blows on film for movies and TV. She also had several acting roles, including one in “A Nightmare on Elm Street,” in which she plays a hall guard who seems very concerned with whether characters have hall passes, even in a nightmare. She starts to turn into Freddy Krueger and gives the creepy line, “Hey Nancy! No running in the hallway.”

She worked on set with many famous actors. She had a rule that she wouldn’t go up and talk to them, but she remembers the ones who came up and talked with her.

While doing stunt work on the TV show “M*A*S*H,” Harry Morgan, who played Colonel Potter, asked if he could eat lunch with her.

Ricardo Montalban was probably her favorite. On the set of “The Naked Gun” he recognized her from their work together on “Fantasy Island” years before.

On “The Naked Gun” she shared a first name with the lead actor, Leslie Nielsen. When the director called, “Leslie to the set!” telling her it was time for her stunt, Nielsen said, “Leslie, that’s a nice sounding name.” Hoffman replied, “I think so, Leslie.”

Not all on-set interactions with stars were so amicable, though. While filming an episode of “Remington Steele,” Hoffman was shot by one her favorite actors, Tom Baker, who had previously played the Fourth Doctor on “Doctor Who.”

Hoffman was doing stunts for Doris Roberts playing Mildred Krebs and after a chase scene, Baker’s character corners her at the end of a pier. He takes aim and shoots as she falls into the water below.

“Here’s one of my many heroes, and he shoots me!” Hoffman said with mock tragedy.

Working behind the scenes has changed the way she watches films, too.

“I watch movies, and I try to stick to the story. But then I see somebody I know, and I’m going, ‘Well, there’s a stunt coming up,'” Hoffman said.

In her union roles Hoffman fought for better health coverage for stuntpeople and for women to get more stunt roles.

She said it was sad to see men hired to do stunts for female characters.

“There are women capable of doing every single stunt,” she said.

Hoffman and Wrenn will raise funds for the Walk of Fame plaque because the village did not budget for it this year. They plan to start a campaign soon, seeking donations from horror movie and Star Trek fans.