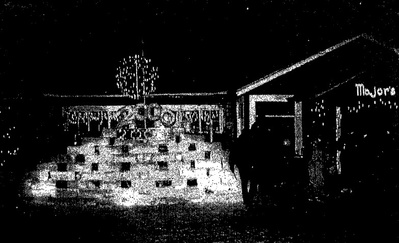 Ice Castle in Lake Clear. About 250 friends and family of owners Jay and Guy Dawson gathered, at the Major's Inn in Lake Clear to celebrate New Year's Eve last Friday. The Major's inn, which has been closed since 1979 was famous speakeasy in the 1920s and re-opened only for the one night to see out the millennium. Adirondack Daily Enterprise, January 5, 2000 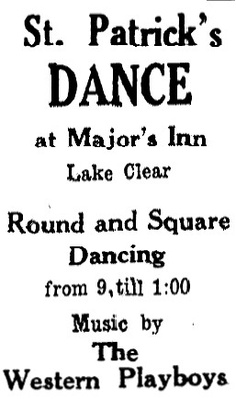 Major Dawson's Inn or Hall was a restaurant and/or speakeasy on New York Route 30 in Lake Clear operated by Major Dawson from 1934 to 1970. He also operated cottages and apartments on the property.

Kathryn Cummings was an employee at the Inn

…Red [Plumadore] was also a pretty good "bouncer" and worked a few summers at Major Dawson's tossing out obstreperous customers among which occasionally numbered myself. It was no use arguing the point when Red started for you. Major Dawson used to handle these chores himself when times were dull but the summer boom forced him to bring In the collegiate Strangler Lewis.