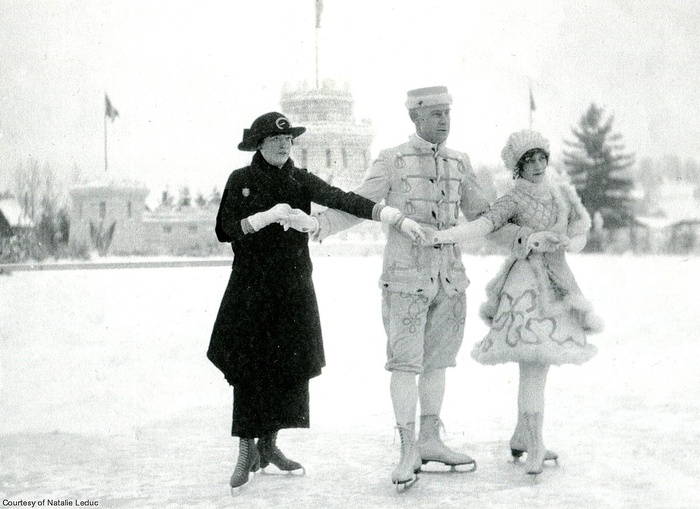 Norval Baptie, center, and Catharine Pope, right, in front of the Ice Palace.  The other skater is unidentifiedBorn: March 18, 1879

Born in Bethany, Ontario, he grew up in North Dakota. By the age of 14 he was the North Dakota speed skating champion. In 1897, he challenged World champion Jack McCulloch to a race, and easily won. Over his career, he won almost five thousand races and lost one. He shattered every amateur and professional speed skating record.

After his speed skating career, Baptie moved into stunt and figure skating. He set new records for broad jump, skating backwards, jumping over barrels, and even skating on stilts. Baptie began doing solo exhibition shows, which eventually evolved into the world's first ice shows. In the 1930s, he directed shows that featured Sonja Henie, a champion figure skater.

Ticonderoga Sentinel, February 9, 1905
CARNIVAL A GREAT SUCCESS.
The Most Successful Ever Held at Saranac Lake. Closed Thursday.
One of the most successful carnivals ever held at Saranac Lake came to a close Thursday evening with the storming of the ice palace. Nilsson, the champion skater, gave a clever exhibition of trick skating before a crowd of nearly two thousand people. The grandstand was not large enough to accommodate all the spectators.
A game of hockey between the Pontiac club and Huntington, Quebec, team resulted in a tie. The professional races resulted as follows:
Half-mile: John Nilsson, first; Norval Baptie, 2nd.; Peter Sinnirad, 3d.
One mile: Baptie, 1st.; Nilsson, 2nd.; Davidson, 3d. Time, 2:53 1-5.
Three mile: Nilsson, 1st.; Davidson, 2nd.; Sinnirud, 3d. Time, 8:59.
The county race was won by Ed Lamy of Saranac Lake, and the obstacle race by J. Liscomb of the same place.

Last week was a gala one at Saranac Lake. The carnival which was held there was a great success and attracted great crowds of people each day. The houses and business places were handsomely decorated, and the spirit of fun and frolic was in evidence everywhere in town. The prize for the beat decorated house was awarded to J. L BLAIR and the second to Dr. TREMBLY; for decorated business places, the FOWLER block, decorated by W. S. FOWLER, won first prize, and F. H. MCKEE second; for decorated sleighs. F. LOWE received first prize, and Mrs. G. A. BOMBARD; second for the finest decorated float first prize was awarded the Knights of Columbus for their float of the “Voyage of Columbus.”

In the skating races NORVAL BAPTIE won all the events, while MORRIS WOOD the champion amateur skater, made good his right to the ..title in the amateur events. EDMUND LAMY, of Saranac Lake, a young skater of considerable prominence, pleased his friends by skating next to WOOD in the amateur events, in some of which he gave the champion a hard tussle for first honors.

The decorated floats were the finest ever seen at Saranac Lake, and elicited words of high commendation from all who viewed the parade.

The storming of the beautiful ice palace was of course, a feature of the carnival, and it certainly was a charming sight. All in all Saranac Lake people have every reason to feel proud of the carnival of 1907.

Norval Baptie, the Western ice skating champion, has challenged Edmund Lamy, the winner of the Wood-Lamy race for the professional championship of the world held last week at Saranac Lake. Baptie is one of the fastest skaters in the country and been seen in former skating races at Saranac Lake.

The defeat of Robert McLean, world ice skating champion representing the United States at the races at Christiana, Norway, on Saturday, brought a prompt protest from Norval Baptie, who Monday morning wired a challenge to Edmund Lamy at [Saranac] Lake. Baptie, who claims to be the undefeated worlds champion speed skater, asks for a series of races with Lamy to determine whether he, Lamy or McLean should have represented the United States in the races abroad.

Lamy has refused to compete this winter but says that he will be in condition by next season to give them all a go.