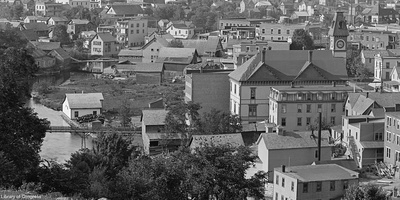 The footbridge is at lower left in this detail from a c. 1902 William Henry Jackson photograph from Blood Hill. 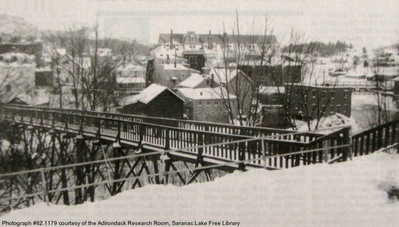 The western end of the old footbridge over the Saranac River, early 1920s. The old Main Street bridge can be seen at right, and the Riverside Inn is in the background. The Dorsey Street end of the bridge was at the Villa Dorsey. Adirondack Daily Enterprise, October 2, 2004 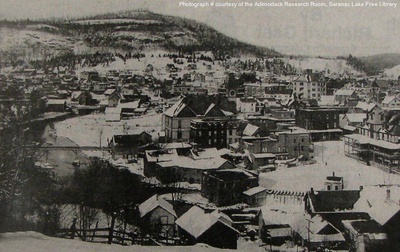 View from the Lake Street hill. The LaPan Highway bridge was built approximately where the footbridge crosses the Saranac River, at left in this circa 1910 photograph. The Riverside Inn is at right. Adirondack Daily Enterprise The Old Footbridge crossed the Saranac River approximately where the present LaPan Highway bridge is today. The original footbridge was built by Walter C. Rice, after he built the Villa Dorsey, to shorten his trip to the center of the village. It was only a few feet higher than the river, and had to be taken down for a few weeks each spring so as not to impede the spring log drives. Photographs from c. 1910 and later show a much higher bridge.  It was torn down in 1926 after the Harrietstown town hall fire.

Excerpted from The Spaulding Block, a focal point of village life, by JOHN J. DUQUETTE From the Adirondack Daily Enterprise, December 12, 1992

Directly across the street, between the town hall and the Empire Hotel, was the popular old footbridge which spanned the river from Main to Dorsey streets terminating at the Villa Dorsey. Most of the pedestrian travel made use of this shortcut to reach the upper Lake Street and Algonquin Avenue areas of the village. Prior to the building at the Petrova High School, students living in the hill sector had to dash across the bridge to reach the old Main Street High School before the bell rang. In its strategic location the Spaulding Block could serenely witness a four-way traffic flow but, unfortunately, this same advantage would ultimately lead to its demise.

Gone today, in addition to the Spaulding block, are the old town hall, the footbridge, the Empire Hotel, and the Riverside Inn. Presently the Sugar Creek convenience store and gas station has acquired the Spaulding site, while the Riverside Inn has given way to a village park which, by the way, features a bandstand directly across River Street from where an earlier bandstand stood 85 years ago.

Matters of business often required his presence on the Main Street side of the river, so, strictly for his own convenience Walter Rice built a foot-bridge across the Saranac River from the river bank in front of his Villa Dorsey home, to the opposite bank behind the building on Main Street. The bridge was only about two feet above the water. During the early years it had to be taken down every spring for about ten days, during the log drive, to allow room for the logs to float down the river. Otherwise logs would have caught on the bridge or on the upright posts supporting it, and that would have caused a log-jam to form.

A special village election will be held at Saranac Lake December 22d for the purpose of voting on propositions for a police justice and the erection of a foot bridge from Main to Dorsey streets.