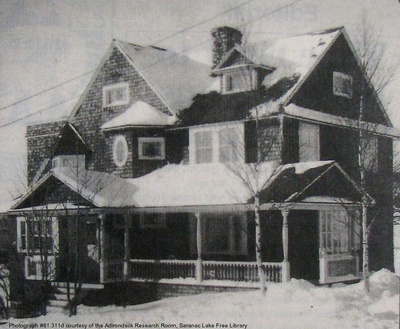 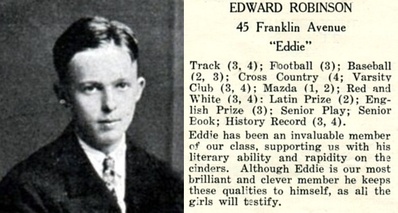 Edward Robinson in the 1927 Canaras

Thomas Robinson in the 1930 Canaras 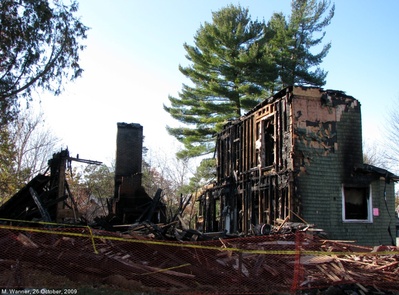 According to the 1916 TB Directory, the McCafferty Cottage, run by a Miss McCafferty, had room for nine patients, had one cure porch and charged $15-30 per week.

In 1944, 45 Franklin Avenue was given as the Saranac Lake address for Courtney LeRoy Malmstrom, a 43-year-old upholsterer and T. B. patient from Jamestown, N.Y. He married Isabel Smith, the long-time patient who wrote "Wish I Might", a memoir of her curing days.

99 years before the fire— A historical look at 45 Franklin Ave.

SARANAC LAKE - The apartment house at 45 Franklin Ave. that burned last Thursday morning was built as a single-family home in 1898, At that time the Helen Hill neighborhood was just being developed, and the house at the top of the hill was one of the first on the street. It was built for Benson B. Sloan, a member of the New York Stock Exchange. He almost certainly moved to Saranac Lake because he or his wife, Anna, had tuberculosis. If his wife was the patient, he may have established her in their own house here and commuted to New York, or traded from here by telegraph.

On July 16, 1896, the Essex County Republican reported that "Mrs. Benson Bennett Sloan, who has been for a number of years a guest (at the Ampersand Hotel on Lower Saranac Lake), is again counted among the number."

"Mr. and Mrs. Benson Bennett Sloan are occupying a tent (at the Ampersand) this season, as usual. Mr. Sloan is a son of Samuel Sloan, president of the Lackawanna and Western Railroad," reads another clipping in the Adirondack Collection at the Saranac Lake Free Library.

By 1898 the Sloans had decided to make their seasonal residence year-round. On July 28, Benson B. Sloan bought Lot 17, Block B of the 1892 Isham subdivision on Helen Hill from William and Violet Coulter, a parcel near the architect's own house on Shepard Avenue. Lots in the Isham subdivision were so small and the terrain so steep that it was very difficult to build a house on most single lots. The next day Sloan purchased the adjacent Lot 16 from Charles C. Hills, and on July 30, he contracted to build his shingled house with Coulter as architect.

Though the house was originally built without sleeping porches (since in 1898 they had not yet come into use for treating tuberculosis), a patient then might well have used the large front entry porch for resting in the fresh air during the day. Probably about 1915, banks of sleeping porches were added to the second and third floors of the house, entirely changing its original profile.

In 1907 Anna Worth Sloan built another house on View Street, and the Sloans sold the Franklin Avenue property to Julia L. Prall of New York City for $9,000. In 1912, Prall sold to Edward R. Young, who rented out the house until he sold it in 1920. According to a 1931 ad in the Journal of the Outdoor Life, 45 and 47 Franklin Avenue were operated together as the Robinson Cottages. Number 45 was a cottage for ambulant TB patients, with 10 rooms, nine porches and six baths on the second and third floors. Some of the patients who cured in the Robinson Cottage were Norwegian sailors who came to the U.S. during World War II rather than return to their Nazi-occupied homeland.

By the early 1970s the building had been converted to apartments and was owned by Frank J. and Susanne Markiewiz, who sold the property to Gregory Clark in 1978. Even before the fire, the original house at 45 Franklin Avenue was recognizable only from the entry porch on its southeast corner, the shingle siding and diamond paned windows. Like many other houses in Saranac Lake, its original form is entirely obscured by the changes it has undergone in its conversion from single-family house to cure cottage, and later, in its remodeling to apartments.