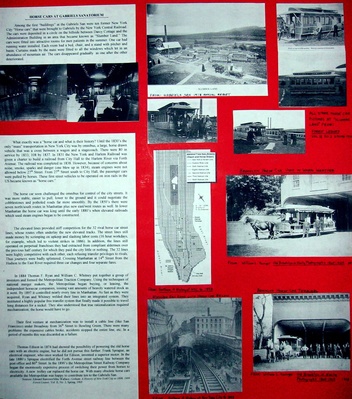 "Slumberland" by Pat and Tom Willis, photo of display taken 2/2009. Click on the image to enlarge the display.

Among the first “buildings” at the Gabriels San were ten former New York City “Horse cars” that were brought to Gabriels by the New York Central Railroad. The cars were deposited in a circle on the hillside between Darcy Cottage and the Administration Building in an area that became known as “Slumber Land.” The cars were fitted into attractive rooms for men patients in the summer. One car had running water installed. Each room had a bed, chair, and a stand with pitcher and basin. Curtains made by the nuns were fitted to all the windows which let in an abundance of mountain air. The cars disappeared gradually as one after the other deteriorated.

What exactly was a “horse car” and what is their history? Until the 1830’s the only “mass” transportation in New York City was by omnibus, a large, horse drawn vehicle that was a cross between a wagon and a stagecoach. There were 80 in service by 1833; 108 by 1837. In 1831 the New York and Harlem Railroad was given a charter to build a railroad from City Hall to the Harlem River via Forth Avenue. The railroad was completed in 1838. However, because of concerns about noise, smoke, sparks and danger (one blew up in 1834), steam engines were not allowed below 27th Street. From 27th Street south to City Hall, the passenger cars were pulled by horses. These first street vehicles to be operated on iron rails in the US became known as “horse cars.”

The horse car soon challenged the omnibus for control of the city streets. It was more stable, easier to pull, lower to the ground and it could negotiate the cobblestones and potholed roads far more smoothly. By the 1850’s there were seven north/south routes in Manhattan plus new east/west routes as well. In lower Manhattan the horse car was king until the early 1880’s when elevated railroads which used steam engines began to be constructed.

The elevated lines provided stiff competition for the 32 rival horse car street lines, whose routes often underlay the new elevated tracks. The street lines still made money by scrimping on upkeep and slashing labor costs (16 hour workdays, for example, which led to violent strikes in 1886). In addition, the lines still operated on perpetual franchises they had extracted from compliant aldermen over the previous half century for which they paid the city little or nothing. The 32 lines were highly competitive with each other, each refusing transfer privileges to rivals. Thus journeys were badly splintered. Crossing Manhattan at 14th Street from the Hudson to the East River required three car changes and four separate fares.

In 1884 Thomas F. Ryan and William C. Whitney put together a group of investors and formed the Metropolitan Traction Company. Using the techniques of national merger makers, the Metropolitan began buying, or leasing, the independent horse car companies, issuing vast amounts of heavily watered stock as it went. By 1897 it controlled nearly every line in Manhattan. As fast as they were acquired, Ryan and Whitney welded their lines into an integrated system. They instituted a highly popular free transfer system that finally made it possible to travel long distances for a nickel. They also understood that true rationalization required mechanization; the horse would have to go.

Their first venture at mechanization was to install a cable line (like San Francisco) under Broadway from 36th Street to Bowling Green. There were many problems: the expensive cables broke, accidents stopped the entire line, etc. In a period of months this was discarded as a failure.

Thomas Edison in 1874 had showed the possibility of powering the old horse cars with an electric engine, but he did not pursue this further. Frank Sprague, an electrical engineer, who once worked for Edison, invented a superior motor. In the late 1880’s Sprague electrified the Forth Avenue street railway line between the post office and 86th Street. In the 1890s the Metropolitan Street Railway Company began the enormously expensive process of switching their power from horses to electricity. A new trolley car replaced the horse car. With many obsolete horse cars available the Metropolitan was happy to contribute ten to the Gabriels San.