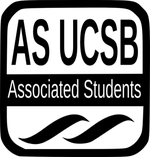 As with everything else in Santa Barbara County, Associated Students is shortened down to its initials (A.S.) and is the phrase used to describe student government. A.S. operates much like the United States government with an Executive, a Legislative, and a Judicial Branch, encompassing additional entities known as Boards, Commissions, and Units.

The Association manages a $10.6 million dollar budget, funding a variety of student services such as the Rec Center, Student Resource Building, Office of Student Life, and Career Services.

Associated Students exist for "Student Service, Student Representation", offering opportunities in leadership in different capacities, from A.S. President to the general membership in any A.S. Entity. Students can also voice themselves at Senate Meetings, which start at 6:30p.m. every Wednesday of the quarter (excluding Week 10 and 11).

A.S. is a tax-exempt 501(c)3 non-profit organization and heavily involved in a community that the University surrounds, Isla Vista. Recently A.S. has been pushing for self-governance in Isla Vista in the form of a Community Service District.

A.S. has been part of this university since before UCSB moved to the current campus and was named UCSB.

You can fill out more here about the history of A.S. and its relationship to Isla Vista - what has it done in IV in the past, and what is it doing now? What are the committees/positions in A.S. that are involved in IV?