Explanation of this page: the UCSB Associated Students Office of the External Vice President for Local Affairs has a website called Our Isla Vista, and they have an IV History page. It doesn't have any notes about its sources though, and it needs fact-checking. The idea of copying it to this page (with permission) is to allow IV LocalWiki editors to work together on improving that document, to make a new version to suggest to the EVPLA for that website.

Until 1567, the area of Isla Vista was a territory of the Chumash people. The Chumash were one of hundreds of tribes that inhabited California. It is believed that the tribe had a population of roughly 10,000 people. The Chumash were said to have been a peaceful people and avid fishers, developing their own language and currency. A Chumash community known as Anisq'oyo', which would later inspire the name for Isla Vista’s own Anisq'oyo' Park.
Isla Vista was later discovered and inhabited by Spanish settlers from 1567-1822. Upon their arrival, the Spanish began to enslave the Chumash, leaving few Chumash survivors.

Based on the Santa Ynez band's history on their website (http://www.santaynezchumash.org/history.html) and Wikipedia (https://en.wikipedia.org/wiki/Chumash_people#Spanish_arrival_and_the_Mission_Era), it sounds like the Spanish first explored the coast along IV and claimed lots of land in the mid-1500s, but weren't doing much on the ground until about 1770, when they started establishing missions and generally colonizing up the place. The territory transition was probably complicated instead of immediate.

Anisq'Oyo' was the Chumash name for the IV mesa, not a Chumash community, as written by Carmen Lodise- "To the Chumash, "Anisq'Oyo" was an oak-covered, coastal mesa between the villages along the lagoon and the ocean, which is Isla Vista today, including the UC Santa Barbara campus. While they did not locate their huts in Anisq'Oyo, they did use the tar still found on its beaches as calking for their ocean-going canoes." Also page 4 here. Another source for that.

That Chumash Villages map isn't particularly useful at that size, and I'm not sure where it comes from (maybe here?). We could include this photo instead, of a mural inspired by Chumash art in the park: 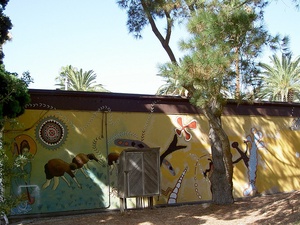 From 1822-1846, Isla Vista was a part of Rancho Dos Pueblos, after the Mexican government granted the land to an Irish immigrant named Nicholas Augustus Henry Den. Encompassing 15,000 acres of ranchland, the ranch extensively covered parts of Santa Barbara County, including the area now known as Isla Vista. The end of the Mexican-American war brought about the cession of California to the United States. In 1862, the largest rainstorm in state history hit California, changing the landscape of Rancho Dos Pueblos, even killing Nicholas Den. Following the flooding, came the drought of 1863, one of California’s worst droughts ever. As a result, the livestock died and the ranch became worthless, forcing the Den family to sell off much of the ranchlands. However, Nicolas Den, the youngest inherited a portion of the mesa (that is now UCSB) and was lucky enough to discover asphalt, and sucessfully mined low-grade tar asphaltum for several years. His brother inherited the portion that is now Isla Vista, which was sold off and developed in three stages, resulting in the mis-alignment of the street pattern.

Map of Mexico/U.S. before the end of the Mexican-American War.

Isla Vista During Times of War:

During the Second World War, California developed into an American hub for shipbuilding, aircraft design, and military training. What is now the UCSB Campus, the area adjacent to the east of Isla Vista, was a Marine Corps Air Base during the war. An interesting piece of American history took place near Isla Vista, as the only military strike made against American soil during WWII occurred when a Japanese shell struck the coastline West of Isla Vista in Ellwood shores. Following the War, the United States War Assests Office sold a portion of the Marine Corps Air Base to the UC Regents. The remainder of the base became the Santa Barbara Airport. 1953 would mark the year that Santa Barbara College became a UC campus, and it moved from its original location on the Riveria (abandoning plans to relocate to a site above the harbor, later to become SB City College) to the Mesa adjacent to Isla Vista.

The university’s growth in enrollment caused an expansion of the development in Isla Vista, and the area began to flourish as a college town, with more and more students inhabiting the area. Students became attracted to the idea of no curfews and fewer regulations than the campus dormitory lifestyle. The influx of students triggered the rapid development of housing. Isla Vista is currently the most densely populated area in all of Santa Barbara County. Such a strong presence of students has also led to thriving activism in the community. Most notably, students demonstrated their anger with local law enforcement by burning down the local Bank of America building (this building was later rebuilt, and is now Embarcadero Hall, a major lecture hall of UCSB).

Pictures from the Bank of America fire: