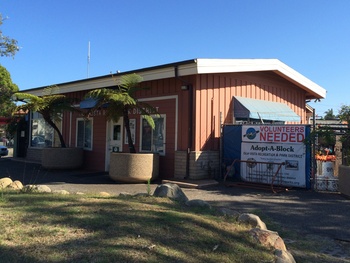 July 2015, by Britta Gustafson (CC BY-SA)Adopt-A-Block (AAB) is a volunteer litter cleanup program organized by the Isla Vista Recreation and Park District. It works to minimize trash on the streets and improve the community by encouraging local residents to volunteer in regular clean-ups.

The Adopt-A-Block supervisor says: "Isla Vista is a unique bluff-top ocean community that does not have assigned street sweeping days where all of the cars have to be off of the street on a certain day so the street sweeper can clean it. Therefore, the geographic area of Isla Vista relies solely on volunteers to remove all of the trash that accumulates between the cars and the curb year-round." Isla Vista has had to find its own ways to deal with the litter that ends up in its gutters, parks, and beaches. According to a 2006 article, "Adopt-A-Block began in 1996 and is funded by UCSB, the Goleta West Sanitary District and the County of Santa Barbara."

(The Goleta West Sanitary District does have a street sweeping service that includes IV, but the truck has to roll down the middle of the road lanes - IV uses nearly all of its parking spaces all the time, so it wouldn't be practical to limit parking on specific streets at specific times.)

AAB is open to volunteers Monday - Saturday from 9:00am - 4:00pm (based in the IVRPD office), and it provides equipment for volunteers such as buckets, gloves, and trash grabber tools. AAB is open year-round but is most busy after large events such as Deltopia, Halloween, and the end of the school year (Move out Madness). Many local organizations and agencies choose AAB to perform community service to help keep their neighborhood clean, as well as to receive accreditation credit. UCSB CAB does a weekly AAB cleanup open to any interested volunteers, for example.

You can get on the general AAB volunteer list by emailing [email protected]! If you'd like to pick up some trash outside of the scheduled events, email them to let them know when you'll be coming in and how many people you have in your group. To learn more and find out about upcoming cleanup events:

It can be pretty amusing to walk around IV picking up trash and putting it in buckets - random people sometimes thank you, make jokes, or ask about what you're doing. It's also pretty good exercise to walk around for a couple hours with buckets, and it's satisfying to throw the collected litter in the IVRPD dumpster (and put the recyclables in the recycling bins). It's an easy way to do something to make IV better instead of just complaining about it, and less litter may contribute to less crime.