Anisq'Oyo is a beautiful park in the center of Isla Vista. As described by Carmen Lodise, "'Anisq'Oyo' is the Chumash Indian name for the Isla Vista mesa that contains the town and the UCSB campus."

The Year of Rebellion of 1969-70 created a lot of turmoil in Isla Vista, and after the Bank of America was burned to the ground, a federal urban renewal grant was issued to build a park in the center of Isla Vista.  This was before the creation of the Isla Vista Recreation and Park District in 1972, so volunteers built the park.  Carmen Lodise, in his book Isla Vista: A Citizen's History, notes that "UC Regent Norton Simon personally contributed $69,500 to the project." There was a multilateral commitment to creating a viable community in Isla Vista following the social turmoil, and the drive to build Anisq'Oyo Park reflects this spirit.

There are two main ponds that are man-made but are host to riparian life. This a photo of the west pond in 1981 prior to the current vegetation growth. Beyond the pond and the little windmill (which is a historical item from a nearby farm), there is an amphitheater and stage area.  Lodise comments that the amphitheater and pond construction were a tandem design, with the "dirt removed to hold the ponds was used to build the amphitheater" while the "ponds...were intended to collect rainfall to irrigate the park..when there was no public water supply" (Lodise pg. 81). 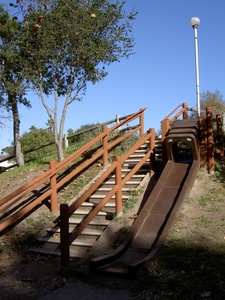 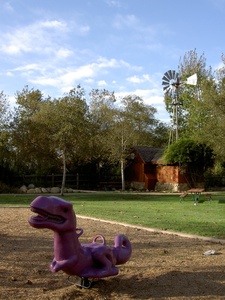 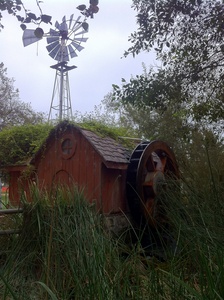 A photo of the waterwheel in about 1978. The pond's waterwheel was repaired in 2014-15 by UCSB engineering students. 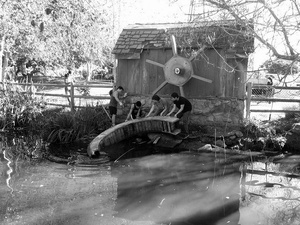 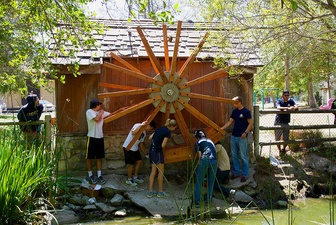 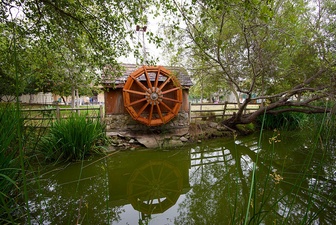 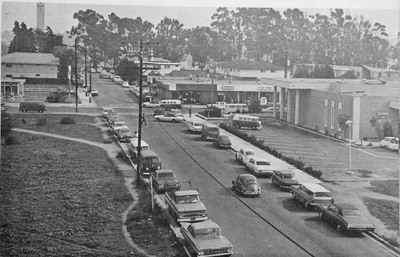 Madrid Road in about 1970, from Isla Vista U.S.A. by Ray Varley. The Bank of America is on the right.During the 1960s and into the 1970s, the students of Isla Vista seemed to be at odds with the Santa Barbara County Police Force. The eruption of this distaste for the county’s law enforcement came when the Bank of America in Isla Vista was burnt down by a rally of students in 1970. The bank burning was said to not only be a response to the Vietnam War, but a stand against the police abuse and violence that was allegedly occurring at the time. The violence was said to stem from an effort on the part of the Santa Barbara County Sheriff's Office to control the growing momentum of the party culture within IV.

After 1970, a movement for cityhood and the creation of an Isla Vista police force would be one of the many goals of the next decade. [2] To ensure the safety of the residents of Isla Vista in the meantime, the Isla Vista Recreation and Parks District (IVRPD) was created in 1972, according to one groundskeeper of the park who wished to remain anonymous. [3] IVRPD had their own problems getting started due to trying to find funding, but it was agreed amongst the landlords and residents--both student and nonstudent, that something needed to change. The atmosphere of IV was changing, and although the partying couldn’t be “stopped,” the creation of safer alternatives in the form of community and university sponsored events was thought to be a more passive approach to the issues at hand and became a major goal of the fledgling parks management district.

And with that, IVRPD became dedicated to transforming what the parks around Isla Vista were used for. The parks were seen as a place of protest and destruction, but they were soon going to change the platform of their political standing. Madrid Park, where the Bank of America had been burned to the ground, was in prime position to be the centerpiece of this transformation.  Its central location, general proximity to local businesses, and its relatively large size compared to other IV parks made it an attractive choice for IVRPD with much potential. 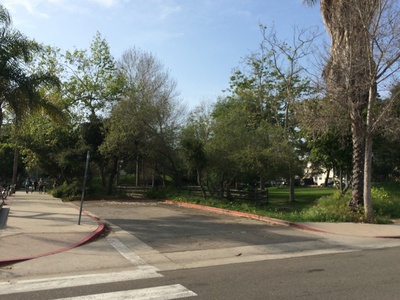 A remaining piece of Madrid Road in Anisq'Oyo' Park, February 2015. By Britta Gustafson (CC BY-SA).In 1977, the name of Madrid Park was changed to Anisq'Oyo Park, the Chumash word for “Isla Vista.”  Along with the change in name, came a change in appearance.  This landscape, which had at one point only been perceived as the location of one of the most destructive events in Isla Vista’s history, was beginning to be transformed. Multiple festivals and community events were held within the park year-round.  In its early years, two annual events were held within the park: a fall festival’ which generally possessed political significance and a spring festival dedicated to raising awareness and funds for the Santa Barbara Rape Crisis Center. [1]

"Formally dedicated at the October 15, 1977 Fall Festival, Anisq' Oyo Park spent most of the 1970s being called Madrid Park, for the road that originally passed through the area and which was separated and broken up to build the park."

"When the District was finally able to start working on Madrid, it immediately began landscaping with native trees and shrubs, as well as planting passion fruit, grapes, and black raspberries along the pond fence. The District also considered starting an "aqua culture" program in which the pond would be stocked with edible fish to allow Isla Vistans to become more self-sufficient and self-sustaining through fishing. Although this idea was not implemented, for a time the pond held mosquito-eating fish."

"Finally by March, 1977 Madrid Park was well enough along in its development for the District to begin to consider officially naming the area. (The IVRPD had been discussing holding a naming contest, a public forum and/or a an IVCC plebiscite to gain community input on a name since late 1973.) The Park District considered such names as I.V. Common, The/A Commie Plot, and Independence Park, keeping the name Madrid Park, as well as naming the park after such luminaries as Mao Tse-Tung and Thomas Jefferson, and Kevin Moran, the student killed in the second Isla Vista riot in 1970. Even with this relatively simple albeit highly symbolic statement, the developing political divisions within the community emerged. While Lodise and Evered, two of the more activist members of the board, wanted the name 'Anisq' Oyo',' the Chumash Indian word for the Isla Vista mesa, directors Jorden and Murdock, who represented the homeowners, wanted to keep Madrid Park as the name. But Anisq' Oyo' won out. The park was officially renamed October 15, 1977 at the IVRPD's annual Fall Festival, and after some initial struggles to settle on a spelling, Madrid Park became Anisq’ Oyo' Park." 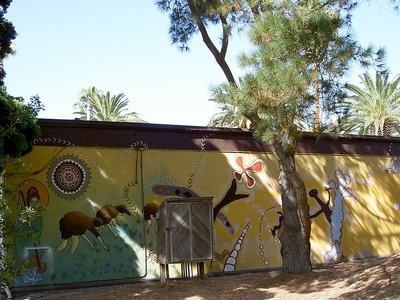 September 2009, by Britta Gustafson (CC BY-SA)In 1994, local artist Richard McLaughlin (an alumnus of the College of Creative Studies at UCSB) painted this mural on the north side of the park, which includes images similar to the historic art at Chumash Painted Cave in the nearby Santa Ynez Mountains. This mural is in the Santa Barbara Arts Commission's list of public art.

Unfortunately the mural is in bad shape now, with sections painted over because of graffiti. It's on the IVRPD's list of mural locations suitable for repainting. You can see some of what it originally looked like by going to McLaughlin's gallery of work, clicking the arrow on the right, and selecting the two yellowy thumbnails at center left. 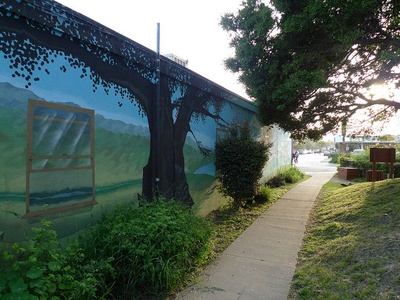 April 2010, by Britta Gustafson (CC BY-SA)On the south side of the park, this trees-and-windows mural has also been damaged by graffiti and is on the list to repaint.

From the fall of 1977 on, Anisq'Oyo Park became a space for the residents of Isla Vista to partake in safer events, a place where UCSB students would eventually go to class with the creation of Embarcadero Hall, a park for the non-student residents and their families, and lastly, a health care clinic for low income people within the community.

Anisq'Oyo Park continues to play host to many important community events. Among these many events regularly held within the park are Blue Nite, Chilla Vista, Isla Vista’s Earth Day celebration, and the “We Remember” candlelight vigil. Both Chilla Vista and the Earth Day celebration focus on the promotion of sustainability, with Chilla Vista also promoting elements of the local culture.  Blue Nite and the “We Remember” event are both dedicated to helping the community of Isla Vista cope with the tragic shooting that occurred on May 23rd, 2014. The events themselves signify much more than just the memory of those who lost their lives, but also promotes a safe space for comfort and healing to the community.

The politicization of Anisq'Oyo Park has changed drastically from the platform of the 1970s, reflecting the change of the Isla Vista community as a whole. Our once destructive political uprisings have now transformed into safe spaces and peaceful protests as a transition into a more unified community. Both have equally impacted the history of Isla Vista, and across time and space Anisq'Oyo Park has been a large part of the cultural landscape.