Isla Vista has a long tradition of producing talented musical acts, from bands like Rebelution (mid 2000s) to singer Jack Johnson (late 1990s). A lot of this was encouraged almost accidentally - in 1980, a person opened up a small storage unit business on Seville Road, and it turned out that there was huge demand for using the units as rehearsal space, eventually torn down in 2012 (keep reading for more about this).

“My first experience with IV was walking down the street and hearing music, bands playing out of their garages and you go further and there was another band in another garage” -Jack Johnson from "Scene & Heard", a 2007 documentary about the history of IV and its music scene.

Add any more bands that you know of, and link to their music so people can check it out! Somebody could also write/expand articles about past & present performance venues in IV: the Red Barn in Estero Park, Biko Garage, Rancho House, etc.

Past musical acts based in Isla Vista

"Has a Wikipedia article" level of famous:

Stories about music in IV

"The Space": the old storage unit band studios on Seville 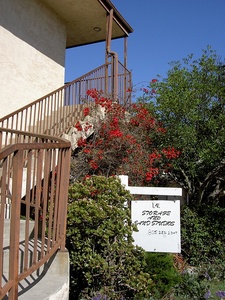 In 1980, Sid Goren opened up a storage unit business with two buildings on Seville Road, and he got requests from lots of bands to use the units as rehearsal space. Many (if not most) of these bands got their start by practicing there. A photo of the units in 1987.

From a Bottom Line article in 2011: "Among the original visionaries who saw its potential as a practice area were the members of a hardcore punk band formed in 1982 called Rich Kids on LSD (RKL). The young bunch of music junkies stumbled on the location and approached the owner, a man known as “Cricket,” who allowed them to make use of it. Signs of the RKL’s presence can still be found as Jesse Youngblood, a member of the band The Groms, pointed out. “If you come inside our unit you can still see some faded lyrics that RKL had written up on the ceiling in like 1982, before getting signed,” Youngblood said."

From the LA Times in 1993: "...doing his fair share to postpone any onslaught of silence, and keeping the I.V. music band scene viable is the local "Godfather of Rock," 78-year-old Sid Goren..."Now I rent to 19 or 20 bands and I've got a waiting list. It's pages and pages long. One band, D.O.G. (Deadly Orgasmic Grooves), has been waiting for two years." Everybody who's anybody in I.V. rock rents from Goren. He's got Leadhead, Popsicko, Grizelda, Indica, The Gathering, and lots of others with funny names." 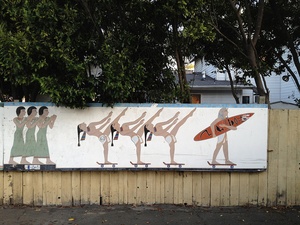 November 2011, photo by Britta Gustafson (CC BY-SA)Goren ran the complex until he was 91 (in 2006) and died in 2010. The storage buildings were torn down in 2012-13 to build Icon Gardens, a luxury student housing complex. Here's a photo of the old building on the sale listing and an Instagram photo of the new building by one of the bands that practiced there. A redevelopment document said "The project is envisioned to be a model for future development in the downtown area that will encourage other redevelopment projects, thereby improving upon the existing neighborhood character and built environment of Isla Vista."

There are no other dedicated spaces for band practice in IV, which doesn't seem great for neighborhood character.

The parking lot fence had a painting of ancient Egyptians on skateboards and surfboards, now one of the Lost Murals of Isla Vista. Dante Elephante uses a photo of part of the painting: "Their current logo, an Egyptian pharaoh clenching a surfboard, could have been found a year ago inhabiting a wall behind their former practice space on Seville Road (the garages were more recently torn down by their landlord)."

In Stewart Brand's book titled How Buildings Learn, he talks about the importance of "low road" buildings - how informal, cheap, practical, adaptable spaces are important for fostering creative uses and new ideas - think of the Silicon Valley garages where famous companies got started. That book was also turned into a TV mini-series, and the second episode shows some examples of low road buildings, including a garden shed used as a music recording studio by people who wouldn't have been able to afford formal studio space. Self-storage units adapted for local needs is a classic pattern in communities, and a community with fewer informal inexpensive spaces has fewer options for supporting creativity.