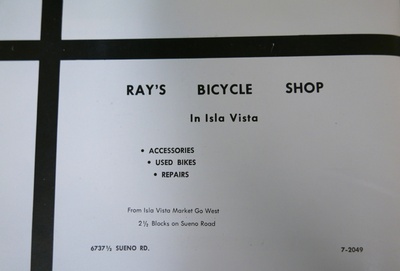 From the 1962 UCSB yearbook - when there were almost no businesses yet in IV other than IV Market, Nebi's Coffee Shop, and 955 Embarcadero Del Mar, there was a guy running a bike shop out of his house. 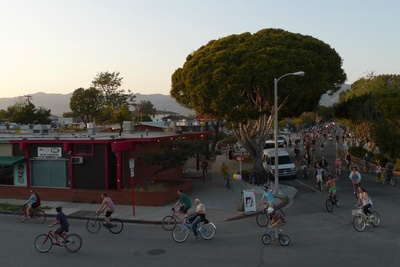 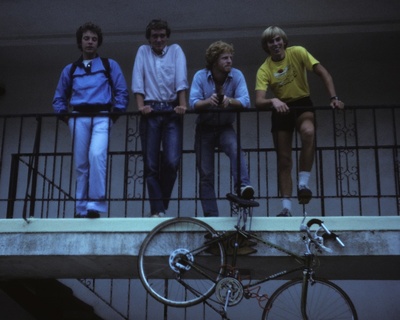 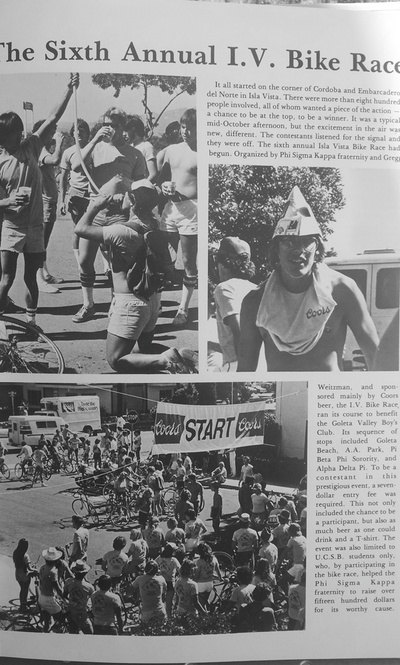 In Los Angeles one drives a car, and knows all the streets and freeways, shortcuts, and traffic spots. In New York being able to navigate the time-dependent maze that is the subway and train system, and knowing how to get from point A to B on foot in the shortest time, is the sign of pride and the key indication of native or well-naturalized New Yorker. In Isla Vista, one rides a bike. You ride a bike everywhere. If you don't have your bike, you walk of course, or drive, but the motivation to leave the house/office is far less. On a bike you can traverse the length and width of IV and the UCSB campus in less than an hour. You can snake your way from Goleta Beach and even from downtown to IV.

Bikes are an intrinsic part of the Isla Vista identity. Mostly everyone rides a bike. The number of bikes easily matches the number of residents in town, making for a rough time parking your bike sometimes. The Garden Court bike parking area is a prime example of the density of bikes and the difficulty one has parking them. Bike racks are found in almost every apartment complex in town and all over campus. They seem to taunt the bike riders by somehow not being abundant enough when you need parking but being scattered everywhere to the point of absurdity when you don't care.

There are a number of bike shops selling brand new or refurbished bikes at moderate to high prices and a number of repair or parts stores as well, scattered around the loop. On campus, Associated Students runs a shop (The north edge of Lot 29, next to the bike path) is inexpensive and has a number of volunteer and paid bike repair people to help you with your bike issue. They also have an area for doing the repairs yourself. They now have a bike rental service.

Riding your bike can be a harrowing experience. During the morning, lunch or evening surges, or just between classes, bike density rises to a level that impedes actual riding. Bike accidents occur readily and injuries range from minor to severe. While it recommended that you wear a helmet, the majority of bicyclists do not. Accidents are more common on campus where the bike paths and lanes are narrower, have tighter turns, larger dips and are in a generally poorer state than the roads of Isla Vista. Once off campus and on the wider streets of the town the obstacles change from other bikes, tight turns and hordes of pedestrian students, to cars running stop signs, or just going too fast, and not running down people walking in the street. You also need to avoid the odd pothole or parked car you didn't see.

Riding a bike while intoxicated is illegal and you are far more likely to get a BUI (biking under the influence) than a DUI. The police/sheriff  are known to not give two [EXPLETIVE DELETED] about the residents and will chase and knock you off your bike if they think you are drunk. Don't ride a bike while holding a red cup, that is just asking for it. I have heard stories about people picking up empty bottles out side after a party getting tickets for being drunk in public. Don't give the police any excuses, they are looking for anything.

It's not uncommon to see people riding their bike with surfboards tucked under their arms. It's much easier than walking that board four blocks to the ocean. Some of them even have racks on one or both sides to hold a board or more. Besides that feat of agility are people who no longer need to use their handle bars. You will seem them riding sitting straight up, arms crossed in front of them whizzing by around a corner, or down the road in front of you.

Bike theft is a common event and almost every one has a bike lock of one sort or another. The U locks are the best deterrents, needing a grinder or saw that can cut hardened steel to remove. Chain or wire mesh based locks are less helpful and can be cut with even a small set of cutters. However with a lock there is a key to be lost or a combination to be forgotten. The lock is usually connected to the rack and the frame of the bike, making it hard to retrieve a bike to which the key or combo has been forgotten. During the breaks between quarters the campus marks bikes left in the lots with orange streamers, to check for abandoned bikes. The streamers have a date written on them and after a month or so of inactivity the bikes are removed by the campus staff. These bikes are usually sold at the campus police auction. Other signs of an abandoned bike are flat tires with deteriorating rubber, and or a good quantity of cob webs. Abandoned bikes offer an opportunity to the more mercenary individual. If the lock is easy enough to remove, one has a bike that is not likely to be claimed. Like many of the other possessions associated with student life, bikes are of a transient nature, changing hands a few times, by people passing them along to others or being stolen or scavenged. Bikes are probably some of the more recycled items in Isla Vista.

Being one of the few places that has a bike path along its coast Isla Vista, UCSB and Santa Barbara get a decent number of cross country cyclists riding through town or campus. They come from all over and are traversing different distances. Some stop in town, hang out for a bit and are generally friendly, others are downright antisocial and want ot continue on their trip with as little distraction as possible. In either case, Isla Vista and the UCSB campus offer a sort of oasis of biking culture that is rare to be found along any bike route; a place where after riding a hundred miles you can fix any problems and buy your replacement parts, or just have a nice coffer or blended smoothie with out getting too many odd looks.