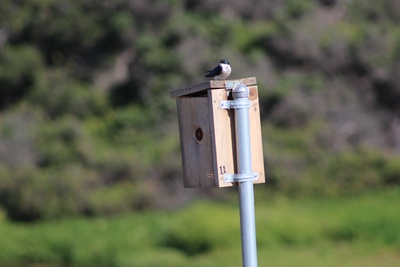 Isla Vista and UC Santa Barbara are home to a diverse community of bird species. As humans have transformed the environment, the habitats and behaviors of birds have changed too. 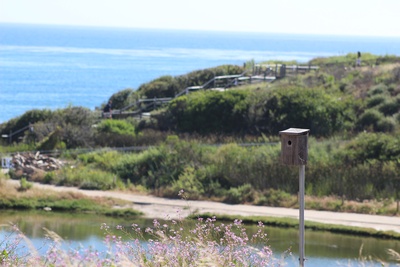 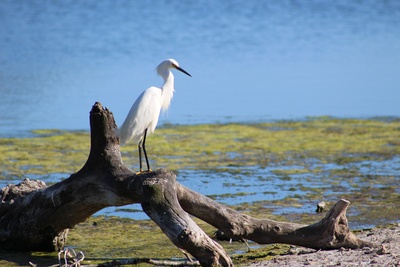 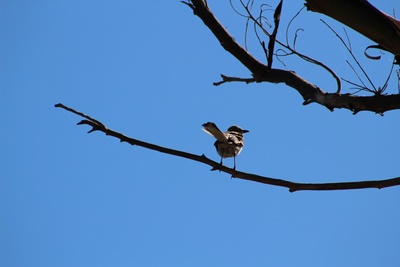 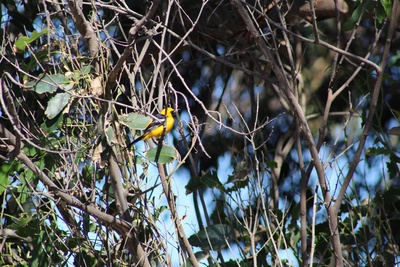 Oriole near the UCSB Lagoonphotograph by Zoe Moriarty 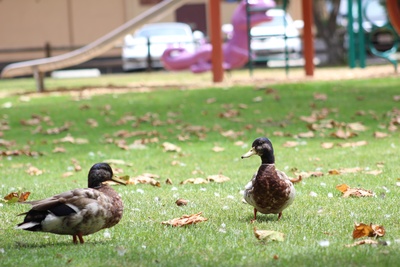 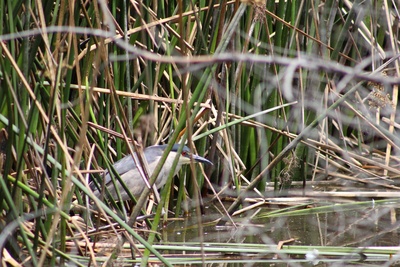 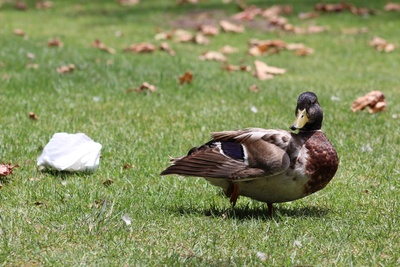 Mallard Duck next to Trash in Anisq'oyo Parkphotograph by Zoe Moriarty 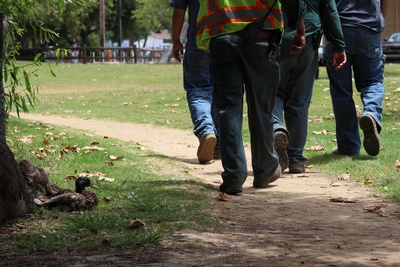 The UCSB lagoon was created from a former salt marsh flat where water levels rose and fell with seasonal evaporation. When the students would arrive in the fall the lagoon would be empty but for dead fish and anoxic mud. In the 1960s the university began to formally close up the lagoon in an effort to make it more aesthetically pleasing. By shoring up the mouths of the lagoon and pumping in 700 gallons of seawater per minute they kept the lagoon constantly level. This lake-like environment now provides resources for birds year round.

Human activities in and around the lagoon have changed bird habitats. In the 1920s and 1930s Great Blue Herons and Egrets nested in the eucalyptus trees on the east side of the campus.  When development on housing and dining commons began they thinned the trees and the birds moved to Goleta Beach.

In the 1990s the northern edge of the lagoon was restored and reshaped to create two small islands. This was partly in an effort to mitigate habitat loss from the extension of the University Center. Fences were put in on the campus side of the lagoon to separate and protect the shallow foraging area populated by shore birds. This infrastructure prevents humans from interrupting bird habitats. Further away from the university center such protections are absent and the salt marsh has been degraded by human influence causing birds to move to other areas.

Restoration projects conducted by the Cheadle Center for Biodiversity and Ecological Restoration (CCBER) have replaced large areas of grasses with native Oak trees. This structure has attracted birds that previously could not use the habitat: Scrub Jays, Oak Tit Mice, Thrasher, Blue Jays, Song Sparrows. “We definitely increased the biodiversity by transforming the vegetation structure of nectar sources,” said Lisa Stratton, Director of Ecosystems Management at CCBER.

Birds in the lagoon are also affected by human owned pets such as cats. Andy Lane, the manager of the Manzanita Restoration Project that is run by CCBER, explained that he has come to know a cat named “Yogi” who frequently hunts in the lagoon’s restoration project. Andy sometimes stumbles upon the cat’s dislodged collar in bushes and brush, and throws the collar back over the fence to Yogi’s owners backyard. According to Andy, the three biggest threats to songbirds are; climate change (which will lead to a loss of habitats for birds in the future), windows, and cats.

Parks in Isla Vista have a wide range of bird species that frequent the areas. Anisq'oyo Park and People's Park have birds constantly surrounding the area, the most common being the mallard ducks. Rodney Gould, General Manager of Isla Vista Parks and Rec District, explained that the man made freshwater pond in Anisq'oyo Park is likely why so many ducks are found in one area.

While Anisq'oyo park has a great deal of wildlife as a result of the pond, it also has a large amount of waste, along with People's Park. Gould explained that while the program Adopt a Block strives to clean up Isla Vista, it generally is more focused on the streets rather than the parks themselves.

Ducks seem to be a major portion of the bird population in the area. Gould explained that Herons are often found in the two parks as well: Great Blue Herons, as well as Night Herons. In the freshwater pond previously, as Gould told, there used to be coyfish, but when the Night Herons and Great Blue Herons came, the fish disappeared.

Gould also explained that there is a large increase in the gopher/vole population in these parks currently, as they prefer drier dirt. Santa Barbara County's significant drought provided a perfect breeding ground for an increase in gopher/vole population, which then led to more food for Herons in the Parks. There have been multiple sightings of Herons in the area hunting for gophers. In a twenty minute span, a Great Blue Heron was seen hunting and consuming three gophers in People's Park.

see video of a heron eating in People's Park HERE

According to Gould, the Parks and Rec District has a certain season where they stop tree trimming in accordance with the nesting season. From February 1st until August 15 in Camino Corto and Camino Del Sur open spaces the department ceases tree trimming for the raptors nesting season; from April 15th to August 15th the Parks and Rec District looks out for other species nesting in nearby areas. They will only trim for safety reasons but do an extensive search in the area, this is regulated by their Habitat Management Plan. 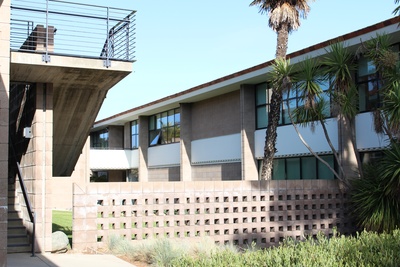 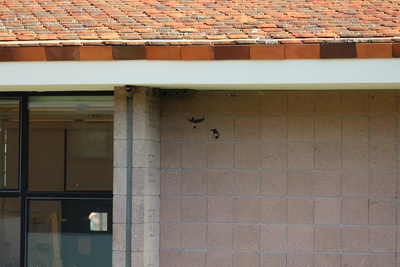 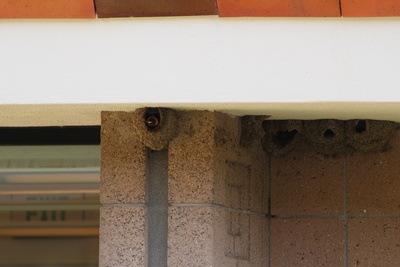 Swallow in Nestphotograph by Zoe Moriarty

BIRD USE OF CAMPUS PROPERTY

Cliff swallows make use of University property rather than making their homes in more natural habitats such as the lagoon. One of the most dense populations of swallows observed on UCSB's campus is in a section of the art building. Cliff swallows will sometimes build their nests on buildings because rough exteriors and an overhang provide protection from environmental dangers. While this is ideal for the swallows, it tends to lead to many droppings, as well as an increased amount of mud in landscaped areas on campus. This in turn becomes a nuisance for people walking through the areas and for landscaping crews. Cliff Swallows are also protected under law and cannot be removed from areas until after nesting seasons. These birds have taken over a space that is ideal for their nesting, despite that it was intended to be a more urban environment. A journal from Embo Reports explains  why this behavior and increase in one species in the urban environment might take place, "In general, more dense urban environments tend to reduce overall diversity among smaller animals and plants, although those that do adapt—such as foxes and pigeons—can proliferate greatly. " (Philip Hunter)

UCSB has set up "bird control spikes" on the top of certain buildings, lights, and windowsills to prevent birds from roosting or perching there. This is an example of humans altering their environment to force birds to act in a way that better suites human values. UCSB is currently doing restoration projects that could change the way bird species interact with the environment, it would be interesting to see future research in this field.

A great resource for learning more about birds and bird sightings in the area is eBird.org. This site, which comes from the Cornell Lab of Ornithology, has decades of data on bird population sightings. Volunteers and faculty members at CCBER complete bird surveys on the lagoon and local areas as part of the restoration projects that they perform. Bird population data can be found on this site in the form of organized bar graphs and maps showing where recent and historical bird sightings have occurred.