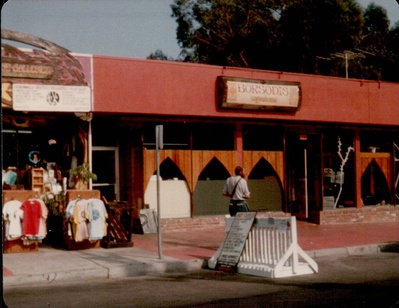 Borsodi's Coffeehouse was a beloved bohemian-style cafe in Isla Vista from 1967 to 1989, in the location where Aladdin Cafe is now (938 Embarcadero Del Norte). It had frequent live music, poetry readings, and other performances from both local people and visitors.

It had stained glass windows made of colored glass bottles.

Adrienne Marie MacIain wrote in Playing on the Edge: Performance, Youth Culture, and the U.S. Carnivalesque (2006): "Artistic expression was an important ingredient in this burgeoning alternative culture, and a local renaissance of sorts was organized by student entrepreneur Robert Borsodi and his wife Lisa [LocalWiki editor's note: Linda, not Lisa]. Offering a free stage for plays and poetry, and stalls for artisans, the Borsodi’s hoped to transform Isla Vista into a “mecca” for the hip and the talented. Their enterprise, “The Arts in Congress,” succeeded in creating a vibrant artistic community, which in turn inspired organizations like the I.V. League to stage cultural events in Isla Vista, such as the 1968 Community Fair" (page 200). 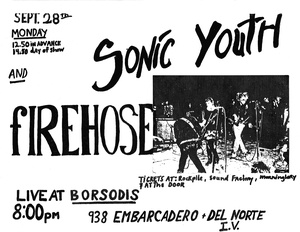 A flyer for Sonic Youth playing at Borsodi's in 1987 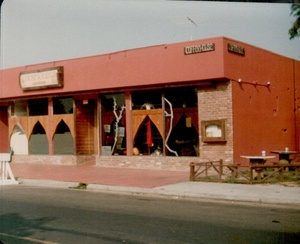 Another view of Borsodi's in about 1980

A 1998 article about the Santa Barbara Chamber Orchestra: "In the earliest days, its players stuffed into the Isla Vista meeting place known as Borsodi's coffeehouse, striking up the sound of Wagner's "Sigfried Idyll" across the street from the Bank of America, which had been burned down eight years earlier in a student demonstration, earning Isla Vista 15 minutes of national fame. As founding conductor Jeffrey Evans explained: "I wanted to put the music in that setting so people would see that this was just like listening to a band. And yet there is this different music. Everybody had a great time.""

About the 1970s: "Another night, I took advantage of a nighttime Proctor and Ward dinner concert at Borsodi’s Coffee House in Isla Vista. I had to eat anyway and Borsodi’s was perfect for an up close comedy act- small and funky. Another act that I saw at Borsodi’s around the same time was Sunburst, a hippie rock band that was made of members of the Sunburst Farms, a local farming collective."

A post about the 1980s: "My Isla Vista was infused with an easy, subdued joy. You never had very far to go, and never had much to do. There was no Internet, no cell phones, no shopping mall, and no multiplex. We had the Magic Lantern movie theater, which showed art films and old classics. We had a couple of book stores, the world’s first Kinko’s, and Borsodi’s coffee house, which had live music and open-mic poetry in the evening."

A post about departed IV restaurants: "What was there before Javan’s? The correct answer is Borsodi’s Coffee House, which was another one of those rocking Isla Vista places with an interesting atmosphere. I even got to see Sonic Youth play there in 1987 for $5."