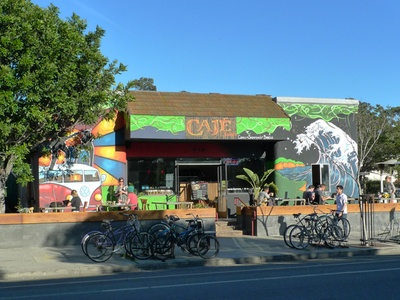 Cajé is the coffee shop with the best espresso-based drinks in IV, "third wave" style. It opened in 2009 with "an entirely organic and fair trade selection of coffee and teas". It specializes in vanilla lattes and also sells juice, smoothies, pastries, bagels, and granola bowls. As one reviewer said in 2010, "the coffee is delicious".

It usually has local art on the walls and sometimes has live music, and you often get a design in your latte. In 2010, Ryan Patronyk, the owner of Caje and also a barista there, won the Santa Barbara Latte Art contest. An example of something you might randomly get at Caje: 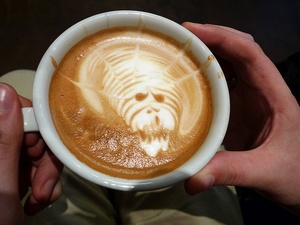 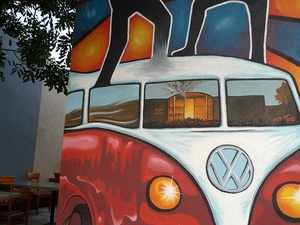 April 2010, by Britta Gustafson (CC BY-SA)The front has a mural including a VW bus with a "reflected" illustration of the 1970 bank burning that took place directly across the street, on the site of Embarcadero Hall (note the plaque on the sidewalk). You can sit here and drink your tasty latte and think about the complicated history and historiography of this little town.

In 2012, a short story involving the tree outside the building was published by Gaucho Marks.

This building used to be the Isla Vista Fluff & Fold Laundromat, with two payphones in front (and no mural yet). The laundromat was also in the other part of the building, the space that became The Hub Learning Center.

Caje's mural was partially sponsored by the county's Isla Vista Facade Improvement Program, and it was painted by Michael Kote who was an art student at UCSB.