The Pump House can be found at UCSB's Campus Point Beach; pictured to the right in the image above

On the shore of Campus Point, a tan cinder block structure looms over the sand below. Despite its obscure appearance, the building is actually part of a sophisticated “continuous-flow” seawater distribution system that delivers temperature-controlled and filtered water to six locations on the UCSB campus. This recognizable structure is a familiar sight on one of UCSB's most popular beaches, yet its uses remain a mystery to most.

Newspaper article featuring an image of the original "poles"As recounted by Christoph Pierre, UCSB first started collecting seawater around 1962, when they placed a collection pipe only stretching a short distance from campus point. The pipe was so short that the collection rate would fall down to zero gallons per minute when the tides were low. This pipe was held down by tall poles that jutted out above the ocean's surface, leading local surfers to nickname the beach “The Poles.”

The first “real” pump house was built in 1975, a small structure about half the size of the one currently found on the shore housed a 30 foot well located 35 feet underground. Although this system became outdated because the needs of the university exceeded the capacity of the pump, it is still used as a backup system.

The current pump house found gracing Campus Point was originally built in 1998 and has been used to supply water to UC Santa Barbara ever since.

Where does the water come from? 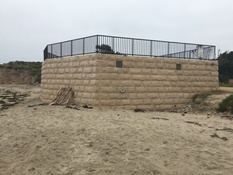 View of the Pump House from the beachThe water that supplies the pump house is transported from pipes that extend a third of a mile offshore and 51 feet deep. The water travels through two parallel pipes to the Pump House, or “Wet Well", on the beach at Campus Point. There , the water is initially stored in a concrete cylinder 30 foot deep and 13 feet in diameter . From here the water is sent to the Seawater Filter Facility via two vertical turbine pumps. This facility has storage tanks, filters, and supply pumps which process the water before being sent to its various destinations on campus. The Gravity Sand Filters in the facility filter the water for particles down to 20 microns in size. The seawater reserves contain up to 150,000 gallons of filtered water and 36,000 gallons of raw seawater at any time.

How is the water used?

Once the water is filtered and prepared for use in laboratories and educational facilities on campus, it is then pumped to each location for various uses. Each of the 6 buildings equipped with this flow-through seawater system utilize the water for different purposes. Two of the six buildings, REEF and BSIF, use the water for education about marine life. In BSIF, or Biological Science Instructional Facility, the water is used primarily for holding and touch tanks for use in intro bio labs. Undergraduate students study marine life such as sponges, mollusks and crustaceans, as well as a few vertebrate marine animals in holding tanks with water supplied from the pumps.  The REEF, or Research Experience and Education Facility, is home to an interactive touch tank and aquarium exhibition. Visitors can learn about an array of ocean life in these tanks that are all supplied with water from the flow-through system. 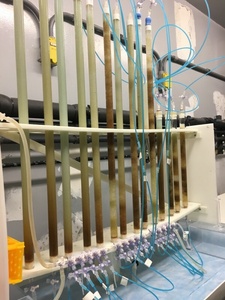 Glass tubes of seawater bacteria used in the Bioreactor in Carlson Laboratory.

One area of focus involves mussel byssal threads. Some experiments are investigating whether the threads contain compounds that could be used in medical procedures (such as ligament replacement) or as underwater glue. Meanwhile, the Carlson Lab studies the relationship between the carbon cycle and oceanic bacteria. Graduate student Nick Huynh studies how dissolved organic matter affects the colonization of bacteria in glass columns. Huynh calls the structure a bioreactor. Since the bacteria require a dark environment to prevent photosynthesis, it’s helpful to have a continuous flow system in place that permits researchers to recreate specific environmental conditions (whether seawater temperature or light levels). The nearby Santoro Lab studies the role of marine archaea and bacteria in the nitrogen cycle. At the multicellular level, the Hofmann Lab uses urchin larvae to study the ecological effects of ocean acidification. The Marine Operations Facility (MOF) located right next door only holds ambient water. The building primarily serves as a holding facility for marine life used in an educational setting: bio labs and touch tanks. In MOF Room 103, organism ranging from mussels to sea slugs can be found until they’re needed in BSIF or REEF.

Moving away from the beach and closer to campus, the Marine Science Research Building (MSRB) uses seawater primarily for graduate research and mimics various environmental conditions like the MBB. The MSRB is part of the Marine Science Institute (MSI).  The neighboring Biology II building also comes equipped with a seawater system, but studies no longer center on marine life at this location.

The recently built Ocean Science Education Building is piped and ready for sea water.Future and Public Use

While 99% of the water in the pumping system is used for education and research, around 1% is available for public use. A hose is available to the public upon request that delivers seawater from the pipe system. Students and others can use this hose to fill up fish tanks, collect seawater for experiments, etc., though few are aware of the hose’s existence. In the future, this hose may be advertised further and used by more people.

A new building on campus, OSEB, or Ocean Science Education Building, has recently been equipped with the flow-through seawater system. Once the building is completed, seawater from the pump will be used for education in this building.

The pump station on the beach at Campus Point is a prominent part of campus geography, yet few know what it does. It may be beneficial to many students interested in marine science to be able to enter this pump station and learn about the seawater delivery system on campus.

Where does the water go?

The UCSB lagoon- kept full with the help of used seawater from the pipe system.After the seawater is used by the various buildings on campus, it is then pumped back out to the ocean via the lagoon. This water plays an important role, according to Lauren Dykman of CCBER, a Restoration Ecologist, as during the dry months the lagoon would turn into a salt flat without the supplement of water provided by the pump. The pump constantly filters water in and out of lagoon at 600-800 gallons per minute, allowing for a unique aquatic marine ecosystem to thrive within the lagoon that wouldn’t otherwise exist in dry months without it.