The bluffs that run along the length of Del Playa Drive in Isla Vista are a commanding feature in the local landscape. They are a place where people come to connect and socialize but also relax and isolate themselves. There is a calming essence that envelopes the oceanside properties along the bluffs, but also an ever-present danger that manifests itself through horror stories of falling students and collapsed balconies. As a result, the cliffs along Del Playa Drive are viewed as both a positive and negative force in the minds of Isla Vista residents.

The bluffs in Isla Vista are unique from the rest of Santa Barbara in that they support the decks and balconies of several dozen homes along Del Playa Drive. The view and ocean proximity that these homes offer is unrivaled in Isla Vista, and as a result they serve as popular locations to hang out and throw the parties that have cemented UCSB as a genuine party school. These bluffs follow a statewide theme of accelerating erosion, which has led to the cutting back of over 30 oceanside homes. 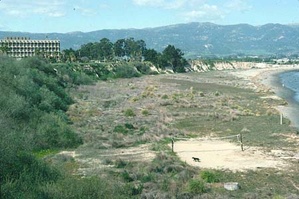 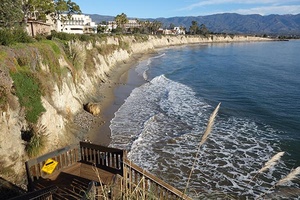 For most UCSB students, the cliffs are so integral to their college experience that the positives outweigh the negatives. A 2017 survey revealed that 70 percent of students felt that removing the houses and parks from the ocean side of Del Playa Drive would have a negative effect on the culture of Isla Vista. The remaining 30 percent felt that this would have a negative or neutral impact. By itself, this statistic confirms the notion that the houses along oceanside Del Playa Drive are important cultural centers for students in the area. Interestingly, in this same survey 40 percent of students felt that "erosion and danger" more accurately described the bluffs along Del Playa than "parties and drinking" and "beauty and nature". Even though many students associate the bluffs with danger, they feel that removing them would detract from the Isla Vista community as a whole. The ability of students to accept this danger is proof of the strong sense of identity that these cliffs create.

For a more detailed entry on cliff erosion in Isla Vista, see the local-wiki page on Cliff Erosion. For further information on Isla Vista Beach, which lies below the bluffs, see the the entry on The Beach.

The draw of the oceanside living in Isla Vista is strong that experiencing the collapse of one's home is not enough to keep students away. During the winter quarter of the 2016-2017 school year, part of a balcony collapsed due to erosion of the cliffs, forcing an evacuation of the residents residing in the house. A major reason these students wanted to live in such a dangerous area was that the opportunity to live overlooking the ocean was once in a lifetime. One of the residents who was forced to evacuate expressed that they did not consider the chances of the balcony falling into the ocean. "I was never warned that it was possible for our balcony to collapse, but next year I am living ocean side once again but I am more aware of the dangers that the cliffs pose now".

When asked "What do cliffs symbolize to you?" the student responded, "I think cliffs symbolize life and death. It symbolizes life because I get to enjoy my surroundings and the ocean and it allows me to be one with nature. I get to stare out and just enjoy the sounds of the waves crashing and although I am stressed with school for brief moments I can be at peace.  However it also symbolizes death because of the danger it can bring. There are unfortunate events such as suicide or accidental mishaps. The cliffs are unpredictable and are subject to falling due to erosion at anytime. But I believe that it is worth the risk because  like I said before you might never have another opportunity to live with a view overlooking the ocean". 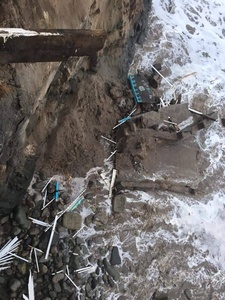 Fallen balcony beneath the bluffs 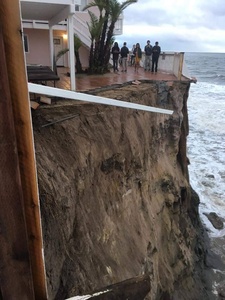 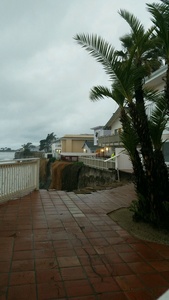 The area where the balcony fell

While other cliffside communities take extraordinary precautions to prevent damage to people and property from cliffs, it seems that Isla Vista is unique in its response. The youthful demographic that dominates the community may contribute to this by fostering a culture that encourages risk taking and living in the moment. Another factor is the fact that almost all of the oceanside homes are rented out, meaning that the residents do not necessarily care about the longevity of the living spaces around them.