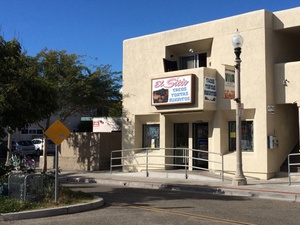 El Sitio is a Mexican restaurant that was established in 2006. Many people consider it a secret gem of real Mexican food in IV.

It's part of "a local chain with four locations that include Santa Barbara, Goleta, and Isla Vista. Owners Jose and Sanjua Gil named El Sitio after the small Mexican town they grew up in, located in the state of Zacatecas." There's a profile of the owners in The Independent, about coming from humble roots and giving back to the community.

One review, from 2010: "El Sitio is by far the most overlooked Mexican locale in IV, and decidedly the most authentic. Their menu provides classic Mexican dishes such as soft tacos (23 varieties to be exact) and tortas (on freshly baked bread) at a fair price."

Another review, from 2012: "Seriously, the “Mexican food” dispute of Isla Vista between Freebirds and Super Cuca’s could be quickly ended if people bothered to walk the extra block to El Sitio. I’m fine with it underrated, though. Most authentic in I.V. for sure."

This location was the home of Taquería Rincon Alteño as of 2001 ("most authentic burrito joint, with the best salsa bar"), and later El Taco Amigo. El Sitio replaced El Taco Amigo in 2006.