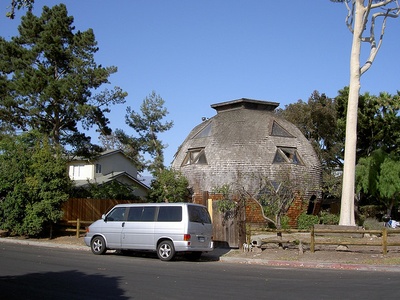 The geodesic dome house (or the "pineapple house", "beehive house", "sphere house", or many other names) at 998 Camino Lindo was built in 1972-73 by a graduate student, Michael F. Hoover: 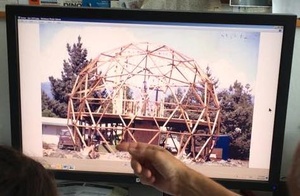 Construction of the house, courtesy of Jonathan Abboud"Mr. Hoover transferred to UCSB in 1968 where he took the first of many geology classes. Mr. Hoover received Bachelor’s degrees in Geology and Geography from UCSB in 1971, and was accepted into the Master’s program at UCSB in the fall of 1971. He received a Master of Arts degree in 1974. Mr. Hoover’s area of interest while enrolled in the Master’s program was Engineering Geology. During the academic year 1972-73 Mr. Hoover took time off from his studies to design and construct a geodesic dome house in Isla Vista. The “dome” as it was called, became a social focal point for students during the 1970’s, and is featured in the book “Santa Barbara Architecture”." 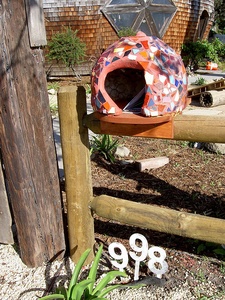 Here's a set of photos including the interior of the house, showing its spiral staircase and triangle windows.

The house has a tiny geodesic dome house for a mailbox, formerly a matching brown one, replaced in 2009 with a colorful version.

Here it is in the 1980 edition of Santa Barbara Architecture: From Spanish Colonial to Modern, by Herb Andree and others, on page 249. The photos were probably taken in about 1975, when the first edition of the book was published. The caption says "This shingled, three-quarter dome is a highly successful home. It is illuminated by a central light shaft and many triangular windows in different configurations. Five bedrooms are organized around a central staircase." 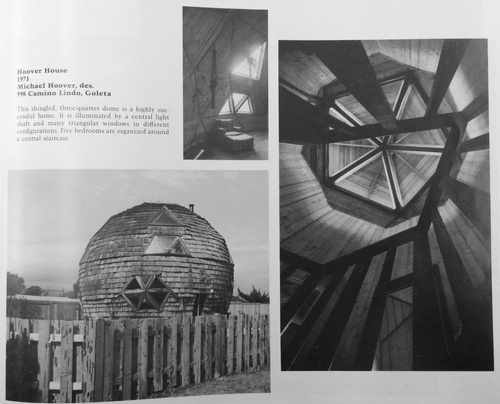 From Santa Barbara Architecture, in the UCSB Arts Library.

Context for the house 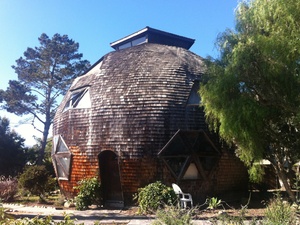 August 2011, by Britta Gustafson (CC BY-SA)In the 1950s-60s, Buckminster Fuller popularized the idea of geodesic dome houses, as one of his many futuristic concepts for a better world with inexpensive housing and generally humans being more efficient and sustainable and happy. Since then, people have built geodesic domes as experiments in self-housing, art projects, and commercial structures - they still have a slightly alien, futuristic, alternative feel. They aren't very practical as houses though.

In about 1967-69 and 1972-73, Fuller hung out around UCSB a bit, talking with people and holding all-day seminars, including with students in the College of Creative Studies (such as Hank Pitcher). From the memory of John Clark, another CCS alumnus: "Buckminster Fuller's CCS colloquia on his Design Science or geodesic domes would typically seamlessly evolve into a group of us in a discussion with him about his latest thinking, which in those days was centered on some aspect of his newly-coined concept of "Spaceship Earth"."

Fuller and Hoover never crossed paths, though Hoover has said he was inspired by Fuller's work. He built the house using the equations and techniques provided by The Domebook by Lloyd Kahn.