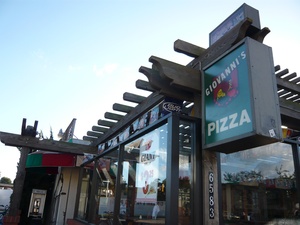 Gio's was the only pizza restaurant in Isla Vista that was not a large national chain, instead operating only in the Santa Barbara area. The building has an outdoor patio and is one of the larger restaurants in IV, so Gio's was a popular place to get pitchers and pizza (good "for an afternoon of sunshine and beer drinking").

It had a "6 lb Calzilla Challenge", where you try to eat "a very large calzone, filled with choice of toppings, topped with sauce and cheese" in an hour.

In 2007, "The newest owners of Giovanni’s, Sean Doucet and fiancé Kimberly Burns, have fixed up Isla Vista’s pizza, pasta and sandwich eatery to offer not only a fresh look, but extended happy hours and more live entertainment." In approximately 2009 or 2010, the business was for sale for $389,000: "In operation for over 20 years, this approximately 3700 sq ft restaurant is located in the heart of Downtown Isla Vista...Giovanni’s also has a busy Happy Hour from 5-7 weekdays and has one of the few Type A entertainment licenses in IV."

The owner of Crushcakes, Shannon Gaston, "grew up in the restaurant business; her father is a founder of Giovanni’s Pizzeria".

Gio's hosted open mic nights (like Java Jones and Coffee Collaborative), live bands, and beer pong touraments, among other events. A long time ago, it hosted screenings of IVTV.

There is a traffic barrier on Pardall Road near Giovanni's, which has been controversial among IV business owners and residents.