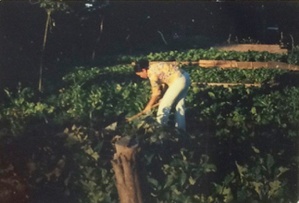 The UCSB Special Collections library has a few photos of Hmong gardeners in IV in the Isla Vista Archives, box 97, folder 14In the 1970s and 80s, a few hundred Hmong people lived in IV. They, and many other Hmong people in the US, had fled Laos due to violent persecution for having been recruited by the CIA to fight for the US during the Vietnam War. Most of them left IV after living here for a few years. Other IV residents had (and still have) a lot of rumors about them, but there are also some written-down interviews with Hmong people about their experiences living here and other academic articles about them based on interviews.

Arrival and interactions with others in IV

Some of them ended up in IV because of American Christian students doing missionary work in Vietnam. This narrative also references being in contact with American Christians from IV as part of why that person's group came here. There's a story that an American Green Beret from IV lived with Hmong people in Laos for a while and sponsored them to come to the US, where he rented apartments to them inexpensively in IV.

From "The Hmong in Isla Vista: Obstacles and Enhancements to Adjustment" by Catherine Stoumpos Gross in 1982 (starting on page 151): "Within the college community of Isla Vista, California, exists an enclave of approximately eight hundred Indochinese refugees. Comprising half of this group are the Hmong of Xieng Khouang Province in northern Laos. A number of articles about the Isla Vista Hmong have appeared in both the local and national press, almost invariably referring to them as an illiterate, animistic, independent mountain tribal society, whose men were outstanding guerrilla fighters and whose people in general had never seen an electric switch or door lock, or lifted a pencil prior to their arrival here..."

"Contrary to the myth perpetuated in the press, some Isla Vista Hmong did attend school in Laos and are literate in Laotian. A few informants are also literate in French and one informant reads Chinese. Most Isla Vista Hmong speak Lao and some Thai in addition to two Hmong dialects. Neither is the persistent report that the Hmong have no written language accurate, since the Hmong language was endowed with a Romanized script by missionaries in Indochina..."

"Finally, the socioeconomic climate of Isla Vista itself appears influential in easing adjustment and promoting friendly relations between Hmong and Americans. Competition for factory employment is minimal; neither the student community nor the adjacent affluent community of Santa Barbara seeks factory employment..."

"Competition for housing is limited to university students, who realize they have no permanent stake in the community and generally react with indifference to the Indochinese presence. The Hmong in Isla Vista, therefore, are not subjected to the degree or intensity of hostility from other segments of the community that is being experienced by Hmong in some larger, problem-ridden communities such as Long Beach and Minneapolis (Calderon 1982; Kershaw 1982). On the contrary, in their contacts with Americans, the Isla Vista Hmong are exposed primarily to sentiments of concern, sympathy, admiration and friendliness. These come from teachers, welfare workers, students and other American community volunteers.." 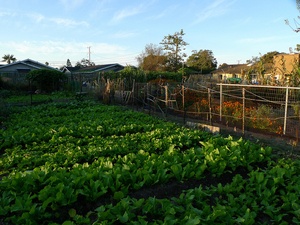 A plot at the Estero community gardens in October 2011, an example of the garden's capability for growing lots of vegetables. By Britta Gustafson (CC BY-SA).

That 1982 article also says "A small plot in community gardens has been made available to each Hmong family in Isla Vista." This is why in the 80s, some people referred to the Estero community gardens as the Hmong Gardens, such as in articles in the Isla Vista Free Press. "More than Just Parks" says that in 1989, "up to 80 percent of IVRPD gardeners were Laotian Hmong refugees" (page 124). They were mostly farmers when they were in Laos, and they grew lots of vegetables in the gardens. There's a rumor they grew opium poppies as well.

There was a widespread racist rumor that Hmong people killed and ate many of the loose dogs that roamed around Isla Vista at the time. This rumor lingers among non-Hmong people who were in IV then and still live in IV. This is a conversation about whether the rumor could possibly be true - the summary is that basically no, there are extreme cases of hunger and religious ritual, but this is not something likely to have ever happened in IV.

Adapting a xenophobic old rumor is very likely to have happened though. There's a really long history of Americans using this kind of thing against recent Asian immigrants - Snopes says "The rumor about Fluffy's or Fido's being slipped into Chinese food by unscrupulous restaurateurs has been traced by British researchers to the earliest years of the British Empire in England and to the 1850s in the United States." There's also more context about this type of rumor about newly-arrived Hmong people in the US in this part of The Spirit Catches You and You Fall Down: A Hmong Child, Her American Doctors, and the Collision of Two Cultures.

There's a real story behind what happened to the dogs. IV's loose dogs were an actual problem in the early 70s - there were so many that they would walk around in packs, which frightened children and got in the way of people trying to ride bicycles. Isla Vista: A Citizen's History explains on pages 61-62 that a new animal control program in 1975-76 was part of general community improvement efforts at the time: "In the mid-1970s...the County got involved when they hired two I.V. residents as CETA workers to be I.V.’s dogcatchers in an attempt to curtail the packs of dogs that had become a danger to children. These animal control trainees were permitted to use special enforcement rules developed by the IVCC’s Animal Control Commission. Dogs had to be within voice control of their owners, not leashed as required elsewhere in the county. Three citations for wandering without such voice control meant the dog had to be removed from town. In less than a year, the two CETA-dogcatchers had the situation under control -- proving that, at least in some areas, Isla Vistans could do a better job running the town than the County."

As rents in IV increased and they got better jobs, most of them moved out to Goleta, Lompoc, Stockton, Los Angeles County, and other places.

In an article by a UCSB student in 2001, about realizing that a lot of Latino families live in IV, he says "I dug deeper, and found out that the run-down apartments where most of the Latinos live, was the place where Hmong and Vietnamese refugees had live in the mid 1970s. In fact, for a short while, both groups touched bases; one leaving, one coming in. When I ask what happened to the other groups, the Latinos’ answer is “No sabemos. Se fueron.”" (We don't know. They left.)