Isla Vista is a place where people consider home, but that may not be the case for all people. Homeless people throughout Isla Vista have a completely different mindset on the way they view and utilize Isla Vista. For example, a park may serve as a place of leisure for the average student, but it may be considered a home or safe place for those who are houseless. As residents throughout IV, we have the privilege of privacy within our home- the privilege to sleep comfortably in a bed or on a couch and the privacy of using a restroom. So what we may consider as an unsanitary public restroom like the one located in Anisq’ Oyo Park, might be considered a luxury of privacy to those without homes. 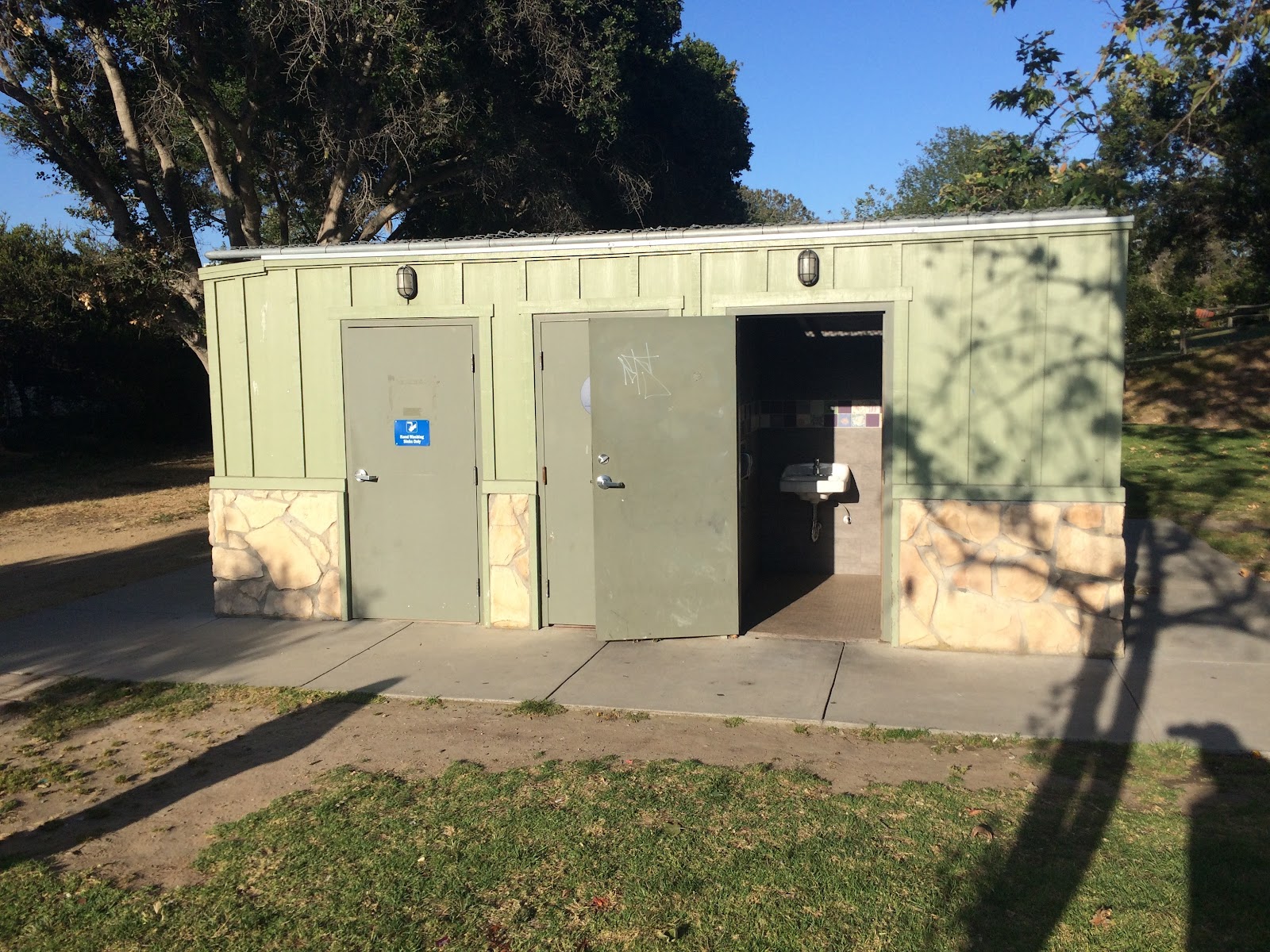 Many members of the homeless community in Isla Vista have found ways of using the environment to their advantage. They often use bikes and carts to carry their things and stay mobile. The bikes that they use typically have four or more bags on them along with spare tires. Many of them don’t have many things, as some come empty handed. Others make use of the overgrowth in the environment, as these areas provide secluded pockets to secretly stash their belongings. They also make use of the excessive amount of cans left over from the party environment in Isla Vista, since these can be recycled for a few cents each. Dogs are also a common sight among the community, however their presence seems out of place. While at first the addition of another mouth to provide for might seem strange, there is a strong codependence between the homeless and their animal companions. According to The Homeless and Their Pets, pets are a source of companionship that act as family and friends, however they also act as protection and guard their owners while they sleep. Many keep their animals on them at all times, which in turn excludes them from some housing and healthcare services that forbid pets.

Pets do come with a fair amount of costs since it is difficult to acquire food for more than one body. Michelle Land says most pet owners are selfless, insisting that their “dog eats first”. While it is clear that these animals are cared for deeply, they do create a negative stigma around their owners. Many passersby are critical of this companionship, questioning whether the homeless should have a pet if they “can’t take care of themselves.” Some also criticize the image of having a poor puppy with you, making accusations that they are just using their animals to gain more sympathy while begging.

Bikes are a commonly used resource for storage and transportation 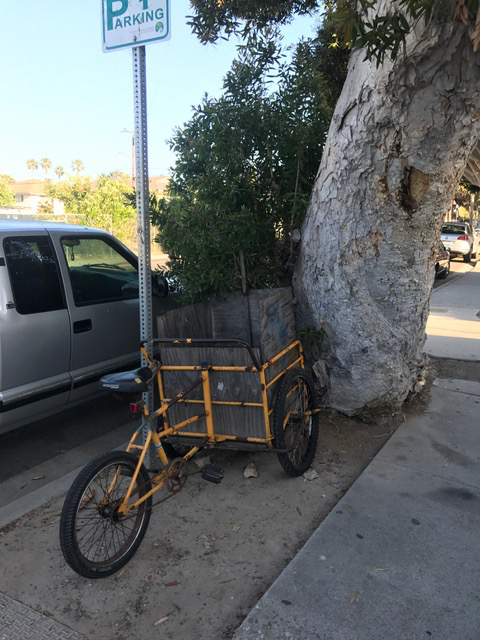 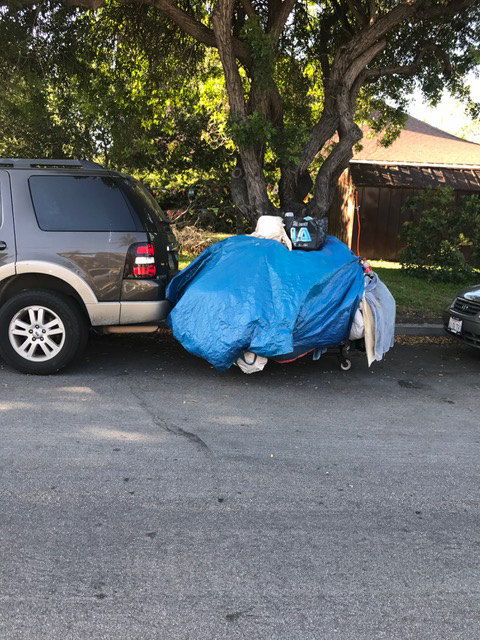 Photo from left to right taken by: Lauren Kurfirst and Christianne Pantoja

Even without a home, many people can still recognize the beauty and serenity of living on the beach. The weather is nice, with only the occasional rainfall; to the homeless community, it is highly likely that it’s better to be here than elsewhere. Tienda commented further saying that “Isla Vista has a good vibe, the community is small and tight knit.” He also mentioned that the houseless community in IV were much more supportive and less aggressive towards each other than in other areas. Tienda is from Sacramento, and he recalled that the houseless in Northern California had a shockingly high frequency of robberies and violence.

Sensei Koan from St. Michael’s University Church, an Episcopal ministry, witnessed police brutality on the streets of LA where many homeless people took refuge. Koan states that the government and police officials have spent too much money sending police enforcement out onto streets where the houseless are densely populated to evacuate them. Instead, he argues, they could build more infrastructure to house the homeless, which would be a less expensive and a more effective strategy in getting the houseless off the streets. Sensi Koan states that he believes that ⅓ to ½ of the people on the streets are crazy and are not able to care for themselves or carry a job. He also states that he believes that only ¼ of these people are economic victims. Sensi Koan’s view of the houseless is a view that many may have in our society but Chaplain Fr. Jon Hedges puts this view in perspective by sharing an alternative view and the real reason why people are homeless in Isla Vista. 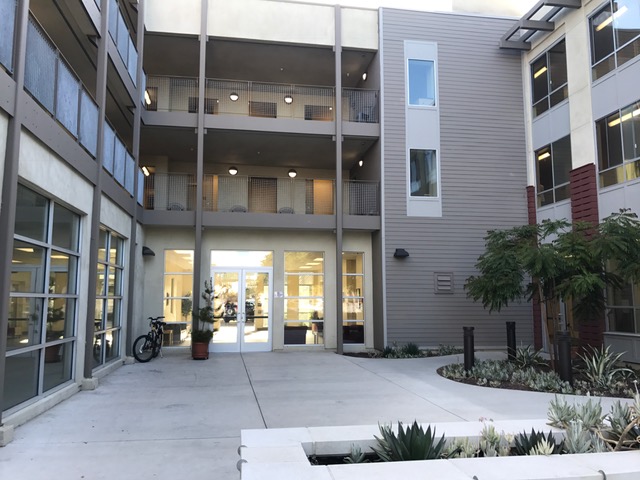 According to The Daily Nexus, a successful homeless shelter made its way to the Isla Vista community in 2014. The Pescadero Lofts, a $10 million project, brought 35 homeless Isla Vistans off the street, and continues to shelter more with time. The project required a collaboration among many different actors, including the housing authority of Santa Barbara, the police department, the university, and many other organizations and individuals. An individual who has been there throughout the whole creation and development of the Lofts is Chaplain Fr. Jon Hedges, who is also involved with Doctors Without Walls, Santa Barbara Street Medicine, and the County Mental Health Street Outreach. Chaplain Fr. Jon created this shelter in hopes of bringing order to Isla Vista and to help prepare and train for our own disasters. He knows many of the houseless in Isla Vista on a personal basis, and offers a perspective of the houseless which is often buried- that they are highly adaptable, intelligent, and resourceful. Father Jon keeps a collage of photos on his wall of those houseless Isla Vistans who have passed, and has a story for each one. He raised his family in Isla Vista and because he was a resident of the area, he formed relationships with many of the houseless, and watched them pass. He believes that they are highly misunderstood, and points out that many are veterans or hold bachelor degrees or PHDs, and that not all are lazy substance abusers, which is a popular stigma many hold of the homeless. For those who are houseless due to mental illness or substance abuse, he reminds that they often grew up in dysfunctional families or have trauma from battling on the front lines in war. If a crisis were to strike, Chaplain Fr. Jon claims that he would want to be with the houseless, because they know how to find the resources they need to survive with little. He says “they are the most adaptable and resourceful people I know”. 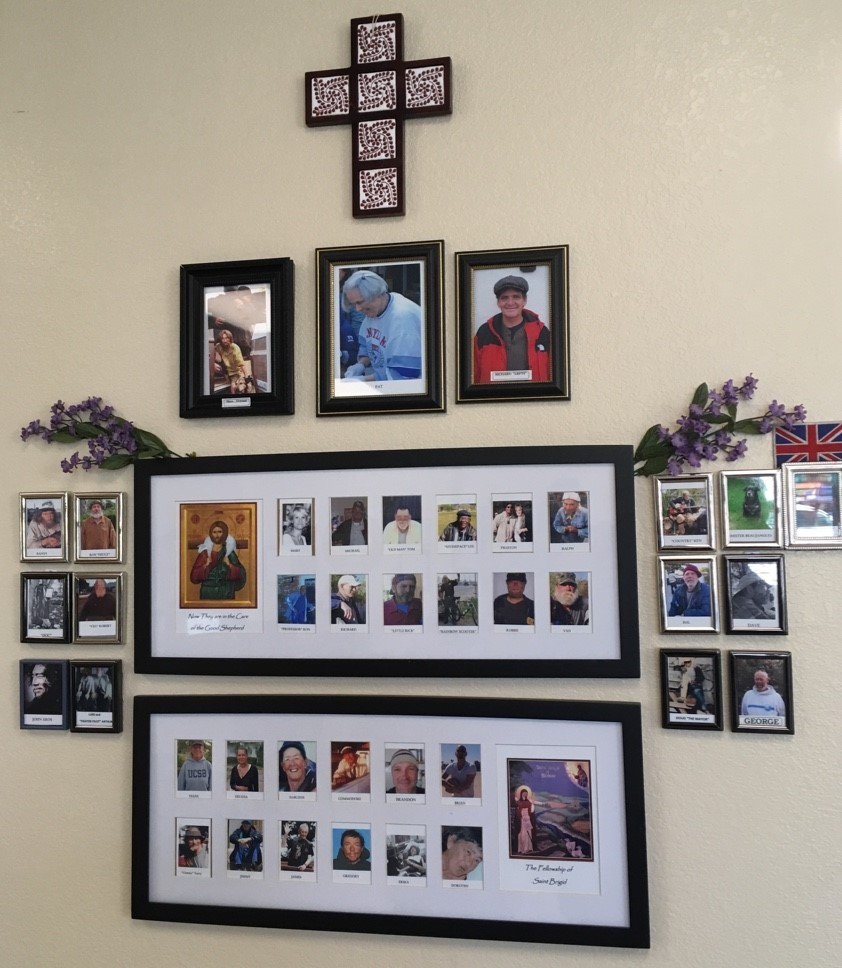 The lofts are home to many flourishing citizens and provide many resources to them, including group dinners provided by the church and by the lofts, access to their own kitchens, a “how to use you cell phone” seminar, computer access and visits from county mental health care. The lofts provide the residents with a safe place to be after the trauma they have endured. They even provide them with psychological first aid where the houseless can talk to someone and the responder will listen and ensure them that they are in a safe place. Although the houseless use resources in a different, more innovative way than we do, Chaplain Fr. Jon says that they tend to favor meals that they ate as a kid, just as we do. Because of this, the loft works to make the meals as homey as possible for the tenants. Since many of the residents in the loft were warriors in the military, they are traumatized. Chaplain Fr. Jon says “The warriors are the ones who end up traumatized” and “this is my tribe, these are my guys”. These warriors who are now houseless are socialized to trust the ones around them because the person next to them in the military was the one who would protect them in dangerous times. This shows how reliant these people are on others in their community.

Since the houseless have a prominent presence in the community, it would be a disservice if the student body ignored them. Gabriel Tienda, one of the Hunger and Houseless Coordinators for the Community Affairs Board (CAB), works closely with the houseless community. The Community Affairs Board is meant to engage with the community, not just students. Instead of ignoring this part of the community, they acknowledge their presence and try to engage with their problems and needs. It is important to help those in need; to try and give without expecting anything in return.CAB helps coordinate the weekly dinners at St. Michael’s Church as well as the services at the Santa Barbara Rescue Mission. At the church, they purchase pizza or fried chicken as a main course, and then supplement that with a side of salad or fruit. While these meals are high in protein, they are not particularly diverse; they often lack substantial grains like pasta or bread, which are high in carbs and part of a well rounded diet. 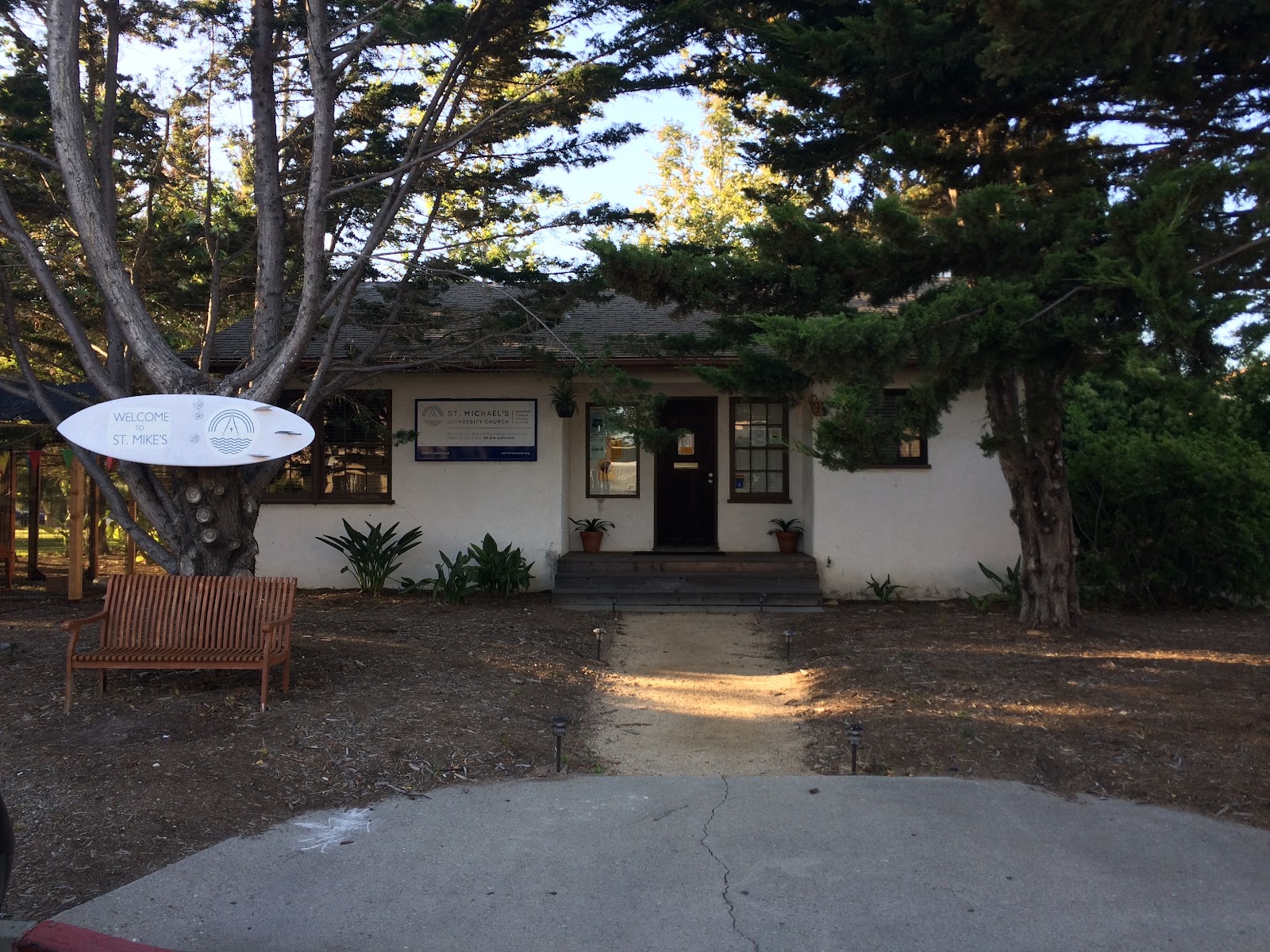 When asked why CAB’s role is so important, Tienda said that, “we all see the houseless and interact with them. CAB is meant to engage with the community, and they are as much a part of our community as the students.” You can’t ignore a whole community and expect the problem to be solved on its own; you need to acknowledge their problems and needs and work to address them. For example, one of the programs was to create goodie bags that have soap, socks and other necessities that were distributed at the church. CAB bases their supplemental programs on the dynamic needs of the houseless, as they might be in need of toiletries, clothes or shelter.

It is important to note that the way we might perceive nature and the environment can be different to others. The houseless use the resources given to them in ways that might not be familiar to us, but that is what helps them adapt to their environment. Have an open mind and try to consider the fact that what we view as "trash" could be valuable to others.