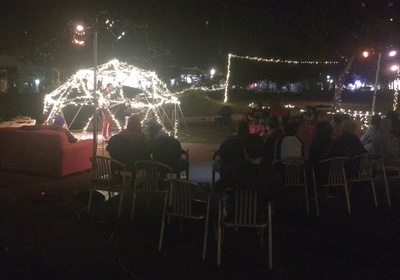 IV First Fridays is an approximately-monthly late-night art event in IV, an experimental alternative to the Del Playa party scene - it draws people to downtown IV for non-alcohol-oriented music, dancing, art, and socializing. Every month, on a Friday (though not always the "first" Friday), the event is run between the hours of 10:00pm and 2:00am. The event combines local bands, unique food, an art exhibit, a place to take photos, a lighting setup, and other features.

IV First Fridays is primarily organized by UCSB students in the IV Open Lab class (in the IHC and Art department), partnering with a variety of student clubs and organizations to help run each event. The class is led by Kim Yasuda, a UCSB art professor, who worked with Kum-Kum Bhavnani, Chair of the Academic Senate, to get campus support for the event. The project is run in collaboration with the the County of Santa Barbara and community partners including the IV Recreation and Park District. There's a profile of Kim Yasuda and her work on this event.

Some of the past events 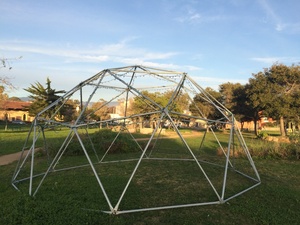 Geodesic structure featured in IV First Fridays, but during the day and without the people. January 2015, by Britta Gustafson (CC BY-SA).On October 3rd, 2014 (poster), the event was in Little Acorn Park with live music by Dj Tempest.

On November 14th, 2014, it was in Perfect Park with live music by Better Looking People with Superior Ideas. The Nexus wrote a report with a music review.

On December 5th, 2014, Excursion Club helped run the event, with the theme "Holiday by the Sea". Art review by a student.