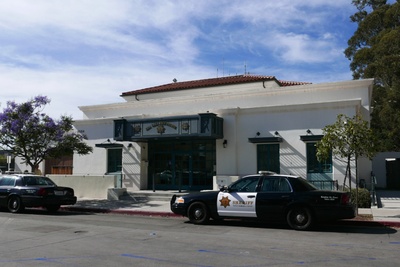 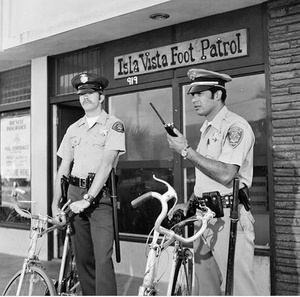 UCSB describes the Foot Patrol as "initiated in 1970 in the interest of developing “community based policing” for the community of Isla Vista. The UCSB Police Department works with the Santa Barbara County Sherriff’s Department (SBSO) and the California Highway Patrol (CHP) to staff the IVFP. While the SBSO maintains primary jurisdiction and responsibility for Isla Vista, the UCSB Police Department and California Highway Patrol provide a supportive role in serving the special needs of a highly diverse community."

The IVFP holds programs, such as "Pizza with the Police" (2015, 2014), where the community is invited to ask questions or voice concerns they might have.

The IV Foot Patrol station is the only police station in Isla Vista. It was built in 2008 on land leased by the university. It replaced the earlier Foot Patrol office at 6546 Pardall Road (now Blaze Pizza). Photo of the old location on Pardall. An article about the new station opening said "Previous locations included the current site of Emerald Video and a site on Embarcadero Del Norte near Super Cuca’s." (Emerald Video is now Wildside Smoke Shop.)

The police in IV have a turbulent history.  The first and most famous demonstration of police conduct in IV is the burning of the Bank of America, a riot that ensued in retaliation to police brutality and other causes. This led to a series of protests, one of which resulted in the unfortunate death of Kevin Moran.  The police initially stated that the shot was from a rogue sniper, but tests later showed that the shot came from a sheriff's pistol.  This enraged the public and was part of what is known as the "year of unrest", during which protests, riots, and beatings were common.  Once the dust settled, it was clear that there needed to be changes in the way IV was being policed.

The IVFP (Isla Vista Foot Patrol) was established in response to the year of unrest in 1969-1970 as a cooperative policing model between the SBSO (Santa Barbara County Sheriff's Office), the CHP (California Highway Patrol), and the UCPD (University of California Police Department). The idea was to take the police force out of their vehicles and put them on the streets, face to face with the people they were policing - to make the police interact with the community more, to become more personable and relatable to them.

The IVFP is now made up of a combination of SBSO Deputies and UCPD Officers; the CHP has since dropped out of the collaboration due to funding deficiencies (a state-wide issue).

UCSB Associated Students wrote a History of Police and Community Relations, including "a growing timeline of events documenting the history of police misconduct and abuse at UCSB and Isla Vista" from 1970 to 2006.

In 2011 and 2012 there were two arson attempts on the IVFP station on Trigo Road: a person throwing Molotov cocktails anda similar second attack a few months later. A UCSB student turned himself in for the second attack and was released.

The Independent wrote an article in 2013 about the IVFP's perspective on policing IV.

A 2014 article talks about the IVFP "Fall Offensive": "the beginning of the school year constitutes what they call 'Fall Offensive,' a no-tolerance policy for alcohol and other offenses in order to set the tone for the rest of the year."

In 2014, the IVFP was involved in a riot during Deltopia.

In 2015, the IVFP hired its first community resource deputy.

In March 2016, The Independent wrote about IV's safety improvements since 2014.