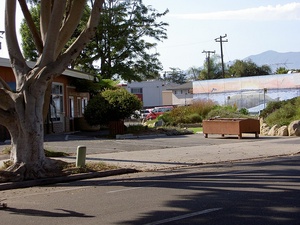 The free box with a lost mural behind it and the IVRPD office to the left. September 2009, by Britta Gustafson (CC BY-SA) 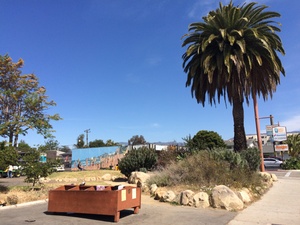 A different angle on the box, again with 955 Embarcadero Del Mar in the background. April 2015, by Britta Gustafson (CC BY-SA).

The Free Box is an open exchange item box located at the corner of Seville Road and Embarcadero Del Mar, in front of the Isla Vista Recreation and Park District building. Clothing, shoes, and other items are left behind by people who no longer need them, and the items are free to pick up by anyone who needs or wants them.

Everybody hears about the Free Box and can benefit from it (from clearing out household clutter to clothing yourself), and it's a place where people across all of IV's social groups can end up saying a friendly hi while checking out a pair of shoes. The IVRPD and a volunteer group called the Friends of the Free Box help maintain the Free Box.

The box itself is a wooden box on legs, about 8 feet wide and 3 or 4 feet across. It is divided into 6 compartments. The compartments are usually categorized by what is in them. There can a be a shirt and pants, or tops and bottoms sections. Sometimes one bin is all shoes. Skirts or dresses sometimes get a bin. It is rather random and the item content is sporadic. Sometimes it's better than a thrift store; some truly amazing items can be found. Here's a photo project featuring a few items.

Each year after the end of spring quarter (at the beginning of summer), the Free Box is temporarily removed so that it's not overwhelmed by Move out Madness.

There are a handful of other similar free boxes in North America. 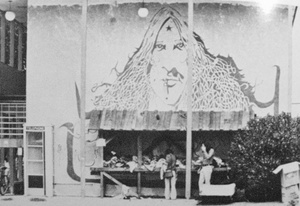 Table at the Medical Clinic building, probably in the early 1970s. From the A.S. UCSB Living History Project, cited as by Randy Rosenthal. 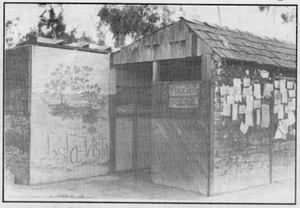 The Free Box was originally a table and then a wooden shack, before it became a box. The March 20, 1989 issue of the Isla Vista Free Press has an article about the Free Box on page 2, during the shack era. It says "Longtime I.V. resident and member of the third Isla Vista Community Council (1971-2) Al Plyley, said that it was erected 'around late 1971 / 1972.' He thinks it was 'started by Bruce McVicor and the outreach program of the Methodist Church in I.V.'

...Geoff Wallace, long-time UCSB Ombudsman and a member of the first IVCC, said that 'The first IVCC was really committed to recycling. We started all of the helpful, public institutions. The Free Box was really a take off on the earlier convention of people dropping off clothes and things at a room in the I.V. Service Center.' For all of those years, there was no agency or organization who had any official role to play in the upkeep of the Free Box - it was just 'there'.

According to Plyley, the Free Box used to be located across the street from its present site, at the South end of the Isla Vista Service Center/Open Door Medical Clinic building, underneath the mural of the freak smoking a joint...Carmen Lodise, publisher of the Isla Vista Free Press and a resident of I.V. since 1972, stated that, 'The Free Box was moved to its present site in the late 1970s when the Clinic bought the building and their insurance rates went up considerably. It's probably better that a public agency like the Park District is in charge of it. At least now it gets cleaned out regularly.'"

The shack had problems though, and it got replaced by a box, as described in a 2006 article: "It was a perfect refuge in bad weather and over the years there have been many early morning “Free Box shoppers” surprised by sleepy-eyed bearded creatures covered with clothes. Unfortunately, it also became a hot spot to duck into to take a leak before the bathroom was built at Anisq’ Oyo’ Park. Partly because of this problem, and also a fire, a new smaller box was built, but the new design was no match for the slim bearded creatures who could squeeze through the nighttime drop slot. The existing box was designed and built by a local Boy Scout, with the help from a contractor, in 1998, and it has worked out really well."

That 2006 article also explains "Friends of the Free Box is a community group formed last year to help keep the Free Box going" and announced a work meeting to replace some panels and fix up the box. A 2009 article says "When the IVRPD threatened to remove the Free Box for good several years ago as a result of violent arguments, people leaving dangerous items such as hypodermic needles, and a myriad of other issues, the Friends of the I.V. Free Box stepped in to offer their support." They help maintain and clean the box.

Posted on the side of the box: 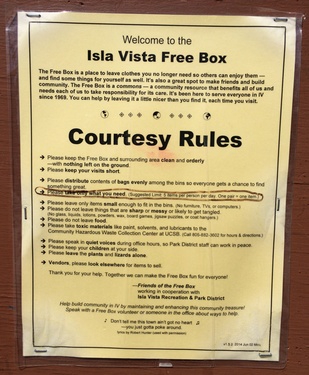 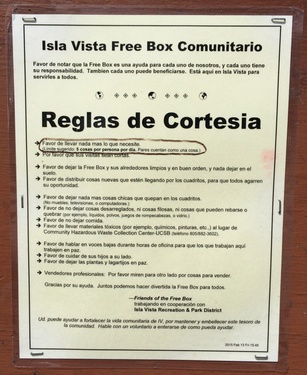 The Free Box is an important public symbol and piece of infrastructure that shows that IV is an unusual place with people who care about it. It takes community cohesion and volunteer work to maintain a common resource like this and prevent it from being destroyed by trash or general disrespect.

It also points out the greatness of IV's famously mild and pleasant weather.