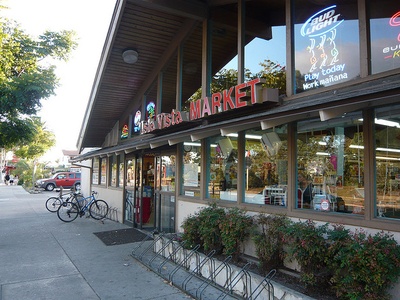 Isla Vista Market is a grocery store. In IV, they are the largest grocery store and have the longest hours. There is also a recycling center behind the store if you want to redeem your empty cans and bottles for cash.

This UCSB and Isla Vista Walking Tour says "Isla Vista Market (939 Embarcadero del Mar), the oldest business in Isla Vista, started in the early 1950’s as the University General Store. Inside and in the back, left corner, high on the wall, is an early picture of the market."

Neal Graffy noted more detail about the early days: "It opened as the University General Store around 1956 by John Jr and Almeda Strickland. From 1957 to 1958 it was run by Dewey and Clara Landru. In 1959 Thor & Eric Ask were the operators and lived down the street at 922 with their wives (the Stricklands and Landrus seem to have lived at the store).The Asks changed the name around 1960 to the Isla Vista Market." Local people often called it the Little Red Store.

The Isla Vista Market Facebook page says it has been "family owned and run by the Johnsons since 1965". 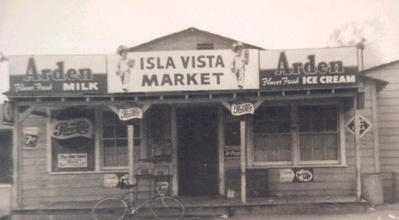 Photo from the old IV Market website. This photo is also inside the store, framed on the wall at the left, with a label saying June 1961. 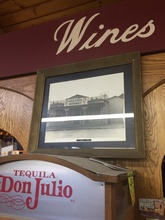 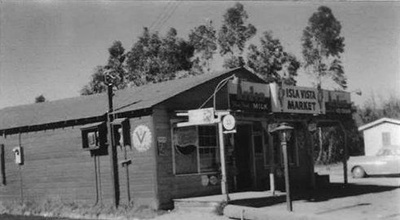 According to co-owner Lee Johnson, the current structure was probably built in about 1965, with an addition on the left a few years later.

In 2012, after long-time local business Isla Vista Bookstore closed (in the location that is now IV Deli Mart), he gave his opinion about recent changes: "Co-owner of the Isla Vista Market Lee Johnson said Isla Vista’s current landscape is the result of multiple periods of transformation in the atmosphere of the community. “There’s been a whole bunch of changes over the years,” Johnson said. “There were the hippie days in the 70s, and then there was a time when a lot of Vietnamese lived in Isla Vista. And for a time, UCSB didn’t have food on campus and all the students would come to Isla Vista for lunch. Now we’re getting the LA-looking high rises opening up in town.” According to Johnson, I.V. Market isn’t in immediate danger of going out of business because it is one of the only grocery stores in Isla Vista." 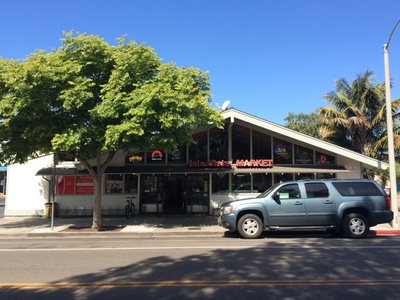 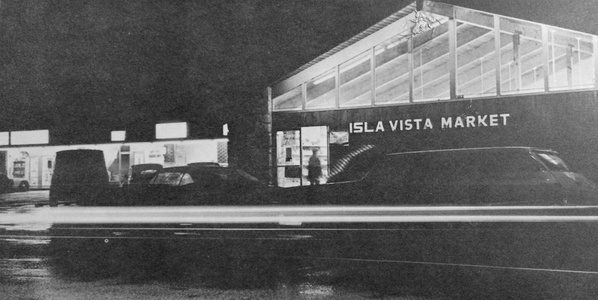 There are a couple small snippets online about how IV Market did in the 1970 riots. From a magazine article in 1970: "Trash can fires were set; realty office windows were attacked again, and a fire hydrant outside the Isla Vista Market was opened, flooding the market's floor."  From the 1970 Congressional Record: "Verne Johnson, who owns the Isla Vista Market, surveyed his smashed windows and said: 'I thought I had good relations with the students. They're my main customers and I've always treated them fairly...'"

Verne Johnson was also involved in local politics. A history of the IV Recreation and Park District says on page 65 (about events in 1985), "As Isla Vista Market owner and longtime cityhood opponent Verne Johnson wrote to LAFCO, 'The proponents have a record against business and have acted in many ways to create an anti-business climate. To them profit is a dirty word. Proponent run Park District has shut down the growth of the C-2 business part of Isla Vista by buying much of the available land for parks. Anisq Oyo, Little Acorn, and Pardall Gardens are all on C-2 commercial land. A new bike lane and red curb of business parking are just new examples of more anti-business moves that they have made. There was no business support of this red curb and bike lane but we do not matter to them. Also we have a new Park tax on our property that is certainly unfair. Actually we do not expect them to be fair because they never have been.'" The owner of SOS Liquor had also opposed those bike lanes.

In 2009, Isla Vista Market partnered with the UCSB Environmental Affairs Board to do a "Carrotmob" event to raise money for energy efficient renovations.

It makes sense that a neighborhood the size of IV has a grocery store, but that doesn't happen automatically. People own the store and run it, and owning a big store gives you some weight in area politics, and it means you have a perspective on changes in the area over time. It's interesting to learn about what IV Market has done with this role.