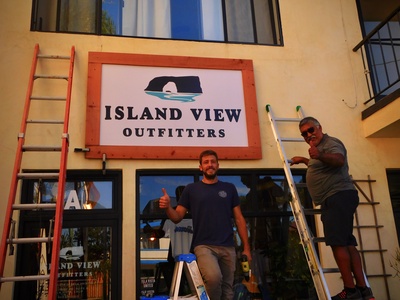 Isla Vista Screen Printing, the local retail business, was started by Garrett Gerstenberger and Jose Cardoso in September of 2009.

Started in his garage at 984 Camino Del Sur, Garrett Gerstenberger developed Isla Vista Screen Printing & Island View Outfitters with the intent to develop unique and stylish designs based on UCSB and the surrounding areas. During the first few months after starting the business, Gerstenberger met Jose Cardoso and the two formed an inseparable partnership that is, as of now, ten years strong. "In the beginning, the main goal was to make UCSB and IV-based designs," recalls Gerstenberger, "there was just a period of time when we mainly focused on tanks, you couldn't go somewhere in the IV area without seeing one of prints, which was really significant for us when we were still up and comers." Garrett went on to note that, outside of this retail side of the store, Isla Vista Screen Printing was primarily being contracted by UCSB in the beginning for various campus organization. He recalls that the traffic from the custom division of the business, as it pertained to UCSB, led to many important connections with fellow local makers, many of whom were looking for the branding expertise he and Cardoso were beginning to offer.

Not too long after Isla Vista Screen Printing started, Garrett and Jose realized they were in need of a more permanent home for their blossoming business, and they decided to make one of these homes at 6565 Trigo, Suite A. "Originally, Trigo was where we actually hand printed all of our shirts where Island View Outfitters, our retail shop, is now. We had the original press set up and we did everything from retail to custom in there, by hand," Gerstenberger notes, "we're still very much doing things by hand and with passion, but we also wanted to make the processes behind us all the more efficient." By the end of the first year at 6565 Trigo, both Gerstenberger and Cardoso realized they were already in need of more space; many account for the fact that their personableness drew them to want to continue to do business with Isla Vista Screen Printing, resulting in the ever increasing custom division. For a period of time, the custom division found homes in various warehouses in the Santa Barbara region, upgrading sites as it was needed.

In 2016, Isla Vista Screen print was presented with a unique opportunity via the Blue Sky Center. The Blue Sky Center is a non-profit based in New Cuyama, in the High Desert of California, with the main intention of strengthening the communities of Cuyama Valley via entrepreneurial partnerships with local business ventures. As one such local venture, Isla Vista Screen Printing was approached with the intention of moving some of its production to the region, with the goal being that this production would not only present Isla Vista Screen Printing with a higher capacity of production, but it would create an opportunity for the local Cuyama Valley that hadn't been present before. Gerstenberger recalls the original transition of one of printing presses in the region and how the team very much wanted to partner with the local community; "We never want to feel like an outside influence, that's not a mentality our team members value. We strive to be a part of the community in the deepest capacities we can, and the mindset of the entire team at Blue Sky Center, with how they care so deeply about the Cuyama Valley communities, was deeply reminiscent for us in regards to our own inception." Following the Thomas Fire of Santa Barbara in 2017, Cardoso and Gerstenberger made the executive decision to fully move the production side of Isla Vista Screen Printing to New Cuyama, thus beginning High Desert Print Company.

In Early 2018, High Desert Print Company was fully formed in New Cuyama with the intention of being the base of production operations for Isla Vista Screen Printing. The intent was simple, maintain the professional service IVSP was known for, while subsequently bringing even more revitalization opportunities to the rural New Cuyama Community. It was at this time that Cardoso decided to move to Cuyama to train the new team members of High Desert Print Co. in the ways of printing, and to maintain the same level of dedication and professionalism the IVSP was known for. It was also at this time that Isla Vista Screen Printing at 6565 Trigo officially became Island View Outfitters. During the tenure of IVSP, the retail division was just as strong as the custom side, and with the ever-increasing base of students, faculty, and family in the Santa Barbara region, there came both the necessity and opportunity to expand even further. It was during the 2018 year that the 6565 Trigo Location of Isla Vista Screen Printing began the transition into become Island View Outfitters, which now operates as both a local retailer and a cultural hub for all information pertaining to Isla Vista, UC Santa Barbara, and the surrounding regions of Goleta and Santa Barbara.

Currently, you can still find members of the custom team , such as Garrett Gerstenberger, at 6565 Trigo, where they are working diligently with groups and organizations looking to take their branding to the next level. Additionally, the wonderful designs of Island View Outfitters, more often than not, are born at this very location as well.

The left side of this building has one of the Lost Murals of Isla Vista, hidden by the next door apartment building.