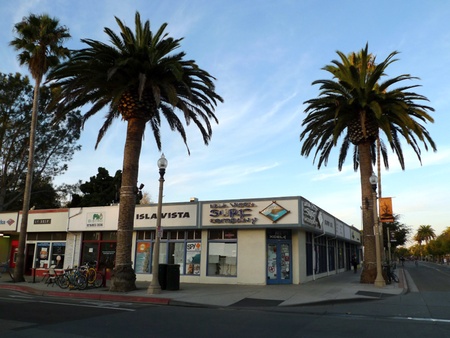 Isla Vista Surf Company was a surf shop in Isla Vista that closed in 2011 ("Business wasn't bad, but the landlord has leased to Chase Bank"). In 2001, they had tried to move to a larger location, but were blocked when the University purchased that property instead. The owner, Joe Burke, passed away in 2013. Another obituary says "Joe joined his love of surfing to his business acumen in 1989, with his purchase of the Beach Shop in Isla Vista from owner Rob Nall." It was one of the few places in IV to buy clothes, shoes, etc., along with surfboards and wetsuits.

IV Surf Company was a major retail business that is now closed. IV doesn't have much retail anymore, especially not retail that generates sales tax - most of that kind of shopping is now done in Camino Real Marketplace in Goleta, State Street in downtown Santa Barbara, or online - and lack of sales tax revenue makes it harder to fund self-government. For understanding that problem, it's helpful to understand what happened to the retail that used to be here. 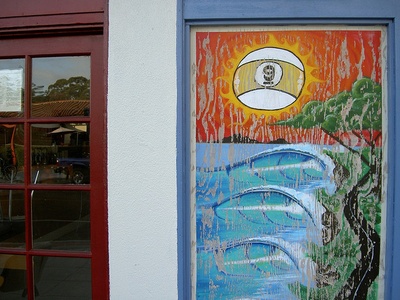 December 2009, by Britta Gustafson (CC BY-SA)One side of the Isla Vista Surf Company building had a small ocean-themed mural with a pool ball as the sun, now one of the Lost Murals of Isla Vista (removed when Chase renovated the building). The UCSB and Isla Vista Walking Tour explains why: this location "was for many years the Campus Cue, a pool hall and central gathering spot."

As part of the core intersection of town, the Campus Cue saw the 1970 Isla Vista riots. A book about Isla Vista says "By fall, 1969, the tension between students and officers was palpable, as evidenced in a mid-August melee that began when an unknown man sprayed mace through the window of the Campus Cue, Isla Vista's pool hall" (page 205) and "On February 24, 1970, full-scale violence broke out in Isla Vista...that afternoon, officers arrested Lefty Bryant, a black activist who was arrested during the August Melee, outside the Campus Cue" (page 207).

An article about the closing of Morninglory, a music store that used to be where Precious Slut is now, said "And it was surrounded by like-minded businesses: The Magic Lantern art house theater, Borsodi’s Cafe, the Psych Shop, and the Red Lion bookstore were all suppliers of food for Boomer heads. And at Johnny’s Campus Cue pool hall, across the way from Stan, you could score the actual drugs." 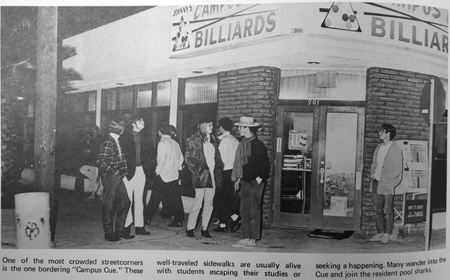 From the 1969 UCSB yearbook, page 348The caption on this 1969 UCSB yearbook photo says "One of the most crowded streetcorners is the one bordering "Campus Cue." These well-traveled sidewalks are usually alive with students escaping their studies or seeking a happening. Many wander into the Cue and join the resident pool sharks."

The sidewalk on this corner used to have an arrangement of Counterculture Tiles. 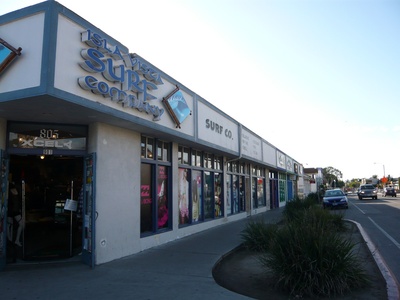 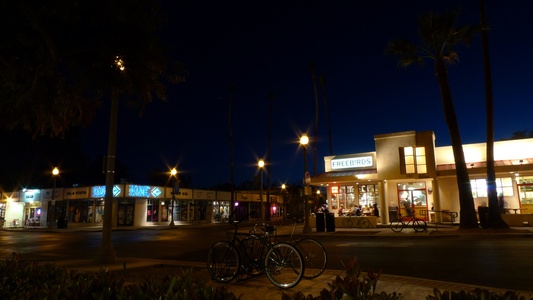 It had even more murals in the 1990s. From a former resident: "The Egyptian Skateboard mural used to be part of the IV Surf Co. sign. It was the middle marquee up top. When they re-modeled the place in the late 90's they threw it out. I spotted it by the dumpster and a couple buddies and myself scooped it up and mounted it behind the Sid studios." (See Bands based out of Isla Vista for the story of the practice studios, and Lost Murals of Isla Vista for other murals.) 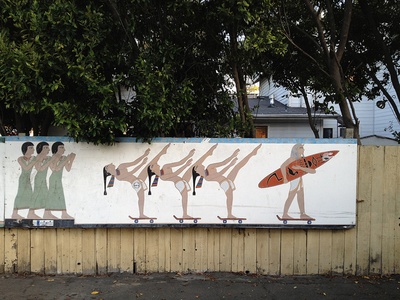