The Isla Vista Women's Center was an independent organization on Pardall Road from 1971-1978, part of the women's liberation movement/second wave feminism.

The Concerned Women of Isla Vista established the Women’s Center at 6504 Pardall in 1971, and before that they had a small office at UCSB. For some members, the reason for the move was that they felt that the office was too restrictive and small for their purpose. For other members, they wanted to create a place for women by their own hands. For others the straw that broke the camel’s back was a donation from Bank of America and the neo-colonial policy that it was associated with. Before 1971, the building used to be owned by Sigma Alpha Omega.

The Women’s Center was founded under heavy influence of separatist feminism. As part of their rejection of the patriarchy, they tried to consciously avoid hierarchical structure with no president or vice-president. Instead, they had an "organic" leadership in which people would naturally become leaders by their own merit. Unfortunately due to leadership struggles, the Women’s Center closed its doors in the summer of 1978. (There is a classic essay from 1971, "The Tyranny of Structurelessness", by a feminist leader about these kinds of leadership experiments in women's groups of the time.) 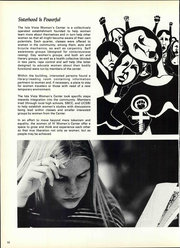 The activities that the Women’s Center organized were varied. They showed films, had book reading, organized concerts, and had classes. They had a library with a mix of feminist works and general-purpose works such as Ian Fleming. Some of the films they showed were Lorraine Hansberry: The Black Experience in the Creation of Drama, The Prime of Miss Jean Brodie (about young girls having to interact with a fascist-supporter teacher, the titular Miss Brodie), and The Life and Times of Frida Kahlo (a documentary about the Mexican painter, Kahlo).

At their height, they had a childcare program. The center also had bicycle and auto mechanics classes, self-defense classes, and carpentry classes. It funded several feminist newspapers, such as Womanfire and Right-on Sister. It hosted consciousness-raising discussion groups, a lesbian group, and art and literary groups, among others. It also had a health collective for education about women's health.

A feminist bookstore, Womankind Books and Records, was established by three women in IV in 1977 and sold "feminist literature, non-sexist children's books, recorded music, artwork, jewelry, and posters" until 1982. "They saw their store as a place for women to learn more about the feminist movement as well as an opportunity for them to display and market their artwork. They sponsored community poetry readings and discussions in a comfortable setting by serving tea and providing cushions for relaxing." (From A Profile of Downtown Isla Vista by Michel Nellis, 1990, pages 62-63.) 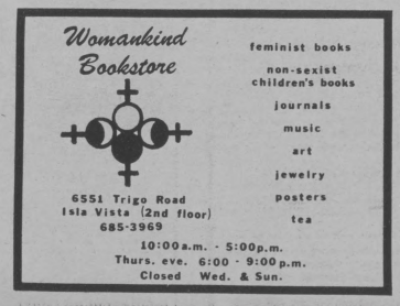 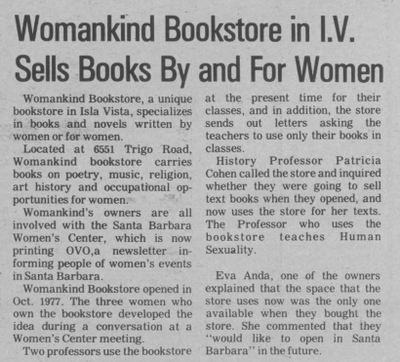