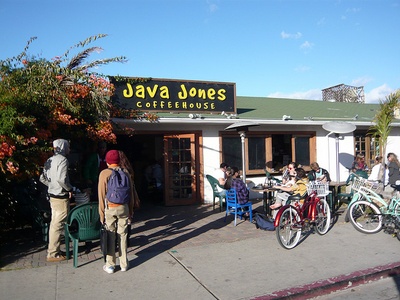 Java Jones was a coffee house located across from Silvergreens on Pardall, open from 1992 to 2010. They used to have open mic night and the best Snickers mochas ever. They were open until midnight for late-night paper writing.

A 2006 review said: "Long-time I.V. staple Java Jones is often frequented by both coffee connoisseurs and study groups...The open windows blend the line between outdoors and in, and the funky assortment of couches offer a perfect place for a discussion or a study session."

It was next door to the rowdy sandwich shop Sam's To Go, which meant that some afternoons at Java Jones had a pretty loud ambient atmosphere (even though the two establishments shared a co-owner). 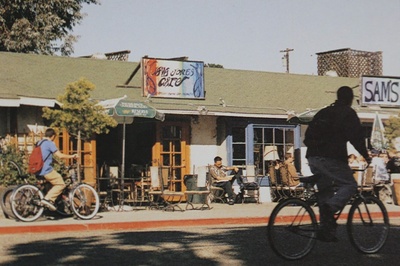 Java Jones in 1997, from this Nexus article, credited to the La Cumbre archives

This article says "Co-owner Brett Winslow established Java Jones in 1992 when he was a second-year student at UCSB." It later expanded to two additional locations downtown (now closed as well).

In February 2010, they remodeled the shop for more energy efficiency: "Although the coffee joint has used organic beans since it first opened and has practiced fair trade standards since 1999, the owners hope to raise their eco-friendly standards even higher through methods such as natural lighting, recyclable coffee bags and solar power generation."

From a related article about investing in solar panels: "Java Jones co-owner John Lewis said he is trying to create a business model and paradigm that is different from anyone else in the area. “I am a small independent coffee business owner,” Lewis said. “I think philosophically that Isla Vista needs to model itself after other smaller communities like Venice, CA where there are no chain restaurants and where all local businesses there support the local economy.”"