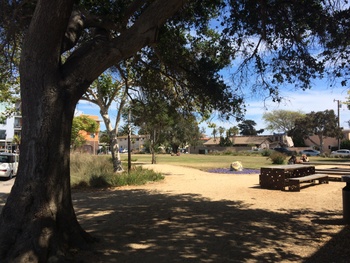 Little Acorn Park is a park on the corner of Embarcadero del Mar and El Embarcadero.  The park features a large grassy area and benches.

The park includes a memorial to the 2001 Isla Vista Tragedy. 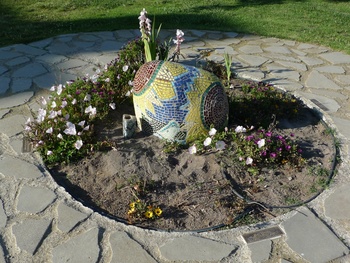 As told by "More Than Just Parks": The Isla Vista Recreation & Park District, 1972-1998, by Christina Ziegler-McPherson: "Little Acorn Park was initially a nursery located on a half-acre triangular lot at the top of the Loop between El Embarcadero and the second half of the 6500 block of Trigo Road and Sabado Tarde, and was owned by a local teacher, Nora Belle Curran.  During the 1970 riots, student demonstrators gathered on Mrs. Curran's property while the police collected across the street in Perfect Park. After the tear gas finally cleared, some students and local residents began to plant gardens on the property, albeit without Mrs. Curran's knowledge or approval."

Hugh Carroll (the artist of the Counterculture Tiles) worked with the owner to establish Little Acorn Nursery on the lot, along with allowing people in the community to plant their gardens. The Isla Vista Recreation and Park District bought the land in 1978 and a community garden was soon established.

The park used to have a lath house (a lightweight wood structure), taken down in 2008.

But before this recent lathhouse came down, there was a very much more elaborate lathhouse built by the original owner of the land, a woman who ran a nursery there. There was a lively political campaign (1980s) to save the original lathhouse with posters hand calligraphied by Charlie Jones, and the other partner in Shy Graphics, myself. Supporters of this campaign called ourselves Friends of Little Acorn. We spoke at a public hearing in favor of saving the amazing and popular structure by rebuilding it, full size, height and original construction pattern (I believe it was made of redwood) which was still quite beautiful even when it had began to fall apart.) Charlie Jones wrote a poem which he read at the hearing, and we placed three acorns on the hearing table for the Park board members to contemplate. We thought we won our point when the vote was in our favor. But what happened, to our disappointment, was that the lathhouse got "rebuilt" in a much smaller and less unique form than the original. This rebuilt structure is the one that came down in 2008. -Maia