Isla Vista has had many wonderful murals lost to building redevelopment, renovation, and new landlords. Here are some of these lost murals, along with a few murals that got repainted for other reasons (graffiti, changing fashions, etc.). 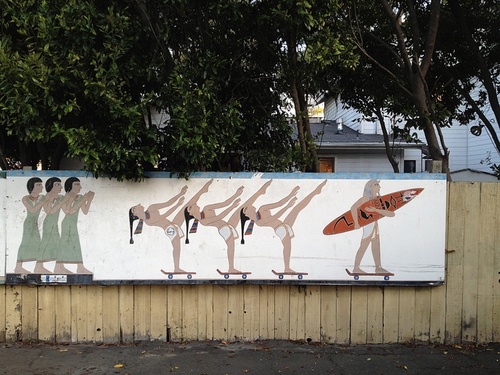 November 2011, by Britta Gustafson (CC BY-SA)This painting was on Seville Road, in the parking lot of the building that held storage units and band studios - which had its own great history starting in 1980, incubating several generations of IV bands.

It was originally painted for the Isla Vista Surf Company building, then salvaged and moved to this parking lot in the 1990s.

The painting was lost when a high-end mixed-use student housing development (Icon Gardens) was built here in 2013.

Before the old building was torn down, an IV resident asked the pre-leasing office what would happen to the painting, and the leasing person said he had no idea. It probably got thrown out.

The mural has been featured on an album cover by at least one local band. 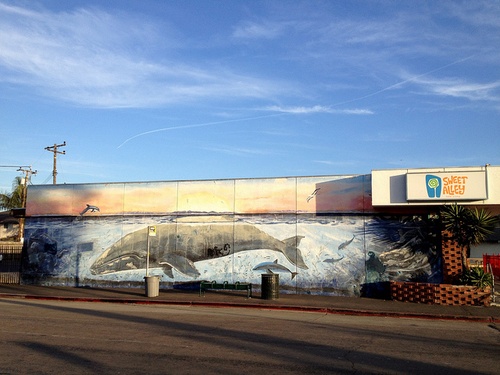 November 2011, by Britta Gustafson (CC BY-SA)This whale mural by a professional artist (Joyce Ortner) was mysteriously repainted with a beach scene in early 2012, which later had sunflower faces added to it (see 955 Embarcadero Del Mar for photos of the revisions). It was on Seville, across the street from the Isla Vista Food Coop.

The IV Parks website has the sunflower faces thing listed as a wall they would like an artist to repaint, as part of their Mural Project.

Closer view, showing the islands painted in the distance.

View of the painted sunset matching the real sunset.

Pelican on the side of the Sweet Alley sign.

At the old Super Cucas 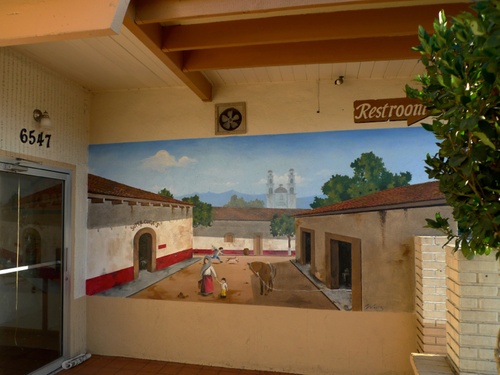 The small Super Cucas building on Embarcadero del Norte had an old-fashioned Mexican scene painted on a wall (more context). The building was torn down in 2011 to build the Loop and the Icon.

There's a video of this building being demolished.

The building had been the "site of Isla Vista’s first restaurant, Nebi's Coffee Shop", which opened in about 1961. 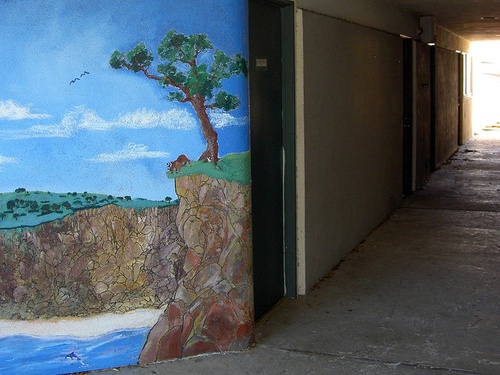 November 2009, by Britta Gustafson (CC BY-SA)On Camino del Sur, next to the United Methodist Church, there was a small education building that had been the location of the Isla Vista Children's Center from 1971 to 2004 (part of the Isla Vista Youth Projects). It had a nice ocean scene painted on an interior wall, visible if you walked up to the building.

This education building was behind the Parking Lot House, and both were torn down in 2012 to build the Campus 880 housing complex. 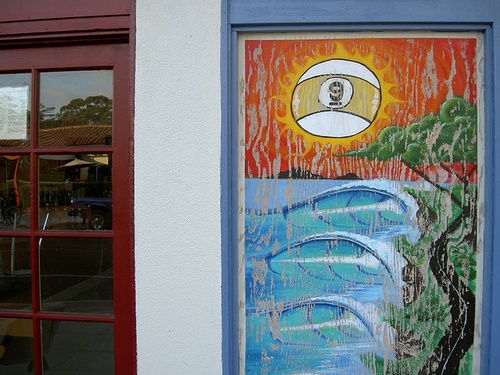 December 2009, by Britta Gustafson (CC BY-SA)This small ocean scene with a pool ball sun was on the side of the Isla Vista Surf Company. The building was remodeled in 2012 before Chase Bank moved in, and the mural disappeared.

The UCSB and Isla Vista Walking Tour says this location "was for many years the Campus Cue, a pool hall and central gathering spot. Locally made tiles from circa 1970 outside and to the east depict numerous counterculture images, including the Isla Vista Tree." 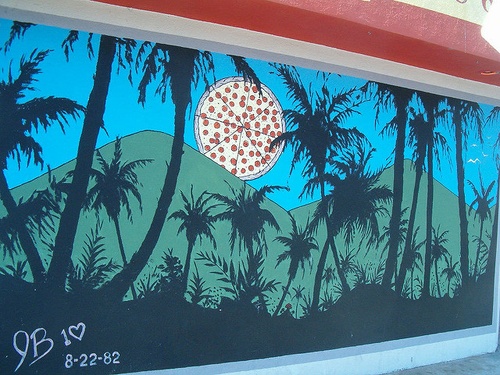 Woodstock's used to have a great mural in the theme of "when the moon hits your eye like a big pizza pie". The mural was painted in 1982, and it disappeared after the building facade got renovated in 2012. 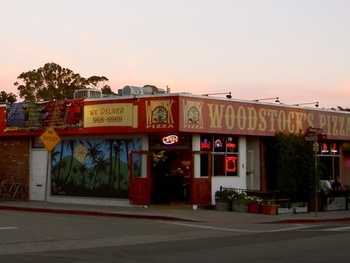 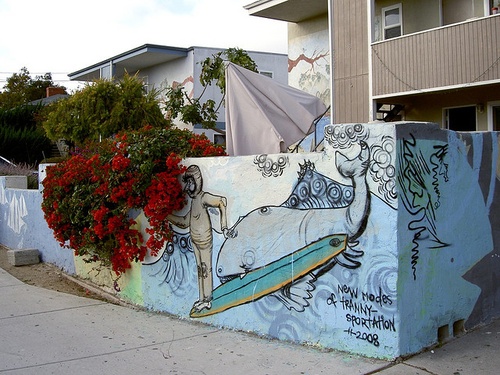 December 2009, by Britta Gustafson (CC BY-SA)The Jesus Burgers house on Del Playa used to have this "New Modes of Trannys-sportation" mural on the front wall, wrapping around its corner. This wall now has a new mural, with an ocean/UCSB scene. 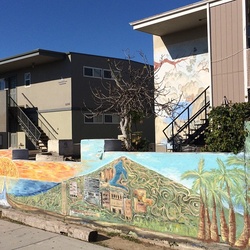 ...and half of the Japanese-style tree 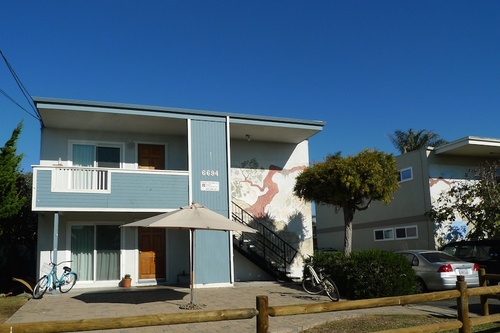 December 2011, by Britta Gustafson (CC BY-SA)These two apartment buildings on Del Playa also used to have a matching tree mural (as seen a little more clearly in this photo from 2005; by 2010 a tree was mostly hiding it). The tree on the left side has been painted over. Apparently a new apartment rental company bought the building in the past couple years and decided that they didn't like the mural.

The bluffs and a horse 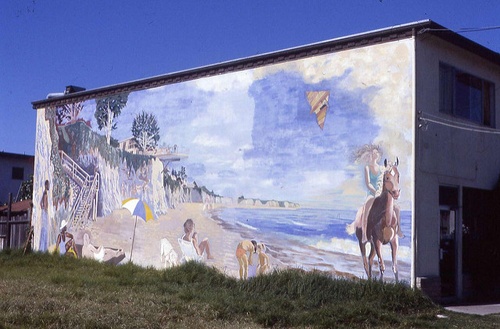 1987, by Mister Goleta (used with permission)

This mural was an IV bluffs scene with a woman on a horse, on the left side of 6565 Trigo, where Isla Vista Screen Printing is today. In this photo from 1987, the woman is depicted with a bathing suit; this was painted over an earlier version where she wasn't wearing clothes. 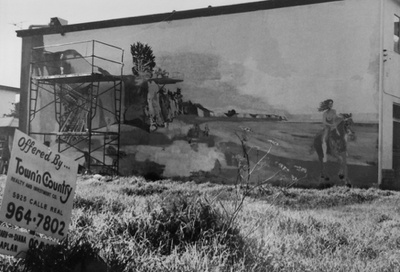 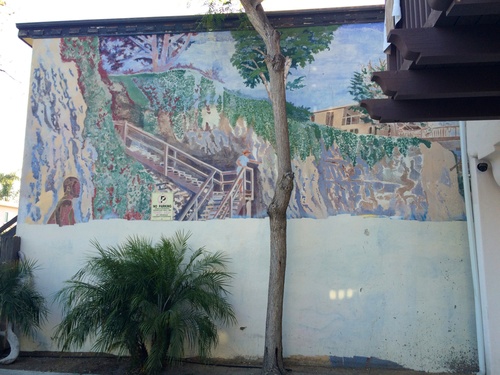 May 2015, by Britta Gustafson (CC BY-SA)This mural was next to an empty lot. According to residents, when Ed St. George, a local property developer and landlord, made plans to build a building that would block the right half of the mural, the community asked him to rearrange his plans to preserve the view of the mural - to put the planned driveway on the opposite side of the lot instead of on the mural side - but he declined. In exchange for blocking this mural, the Santa Barbara County Arts Commission required him to put money into a fund for a new mural. The money went to replacing the "Humpback Whale and Baby" mural. He painted over the lower part of the remaining half of this mural, possibly in response to complaints about the remaining figures being naked.

You can see the remaining half by going around to the back parking lot at 6563 Trigo (the apartment building that hid most of the mural). You can also see a little more of the mural by looking from the front into the gap between the buildings. 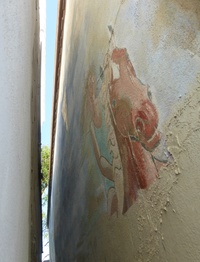 By Mister Goleta (used with permission)

1972, unknown photographer, from the A.S. Living History ProjectThis mural was on the side of 976 Embarcadero del Mar, which was likely the  St. Athanasius Orthodox Church at the time. 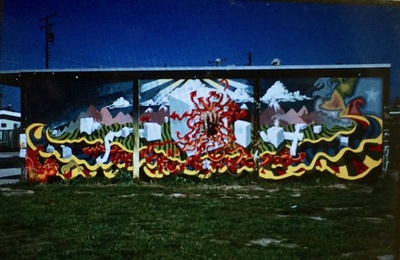 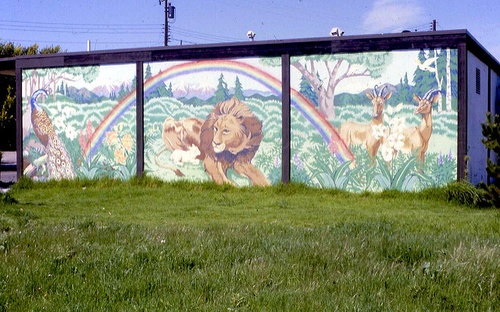 May 1981, by Mister Goleta (used with permission)This mural, photographed in 1981, was also on the side of the St. Athanasius Orthodox Church.

An article in the Isla Vista Free Press in 1987 (page 10) says: "A mural that used to be in the South side of their church at 976 Embarcadero del Mar (across from Rexall Drugs) depicted a lion being subdued by a lamb. Most people interpreted this to mean the church (the lamb) will subdue the community (the lion) through its gentle ways." 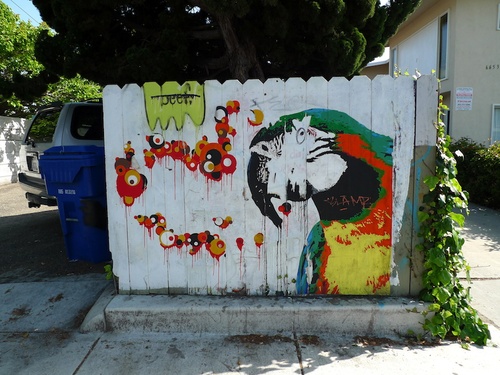 April 2010, by Britta Gustafson (CC BY-SA)This parrot on Sabado Tarde didn't last for very long, but it's a nice example of the pop-up street art that happens around IV. 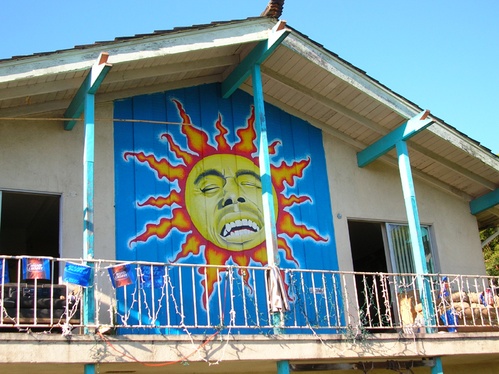 March 2005, by Dos (twoinstincts)The Marley House mural was a popular and beloved landmark on Del Playa until the landlord painted over the mural in December 2009. 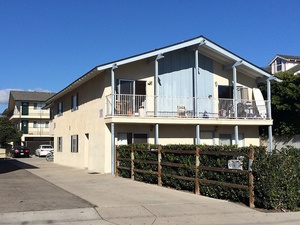 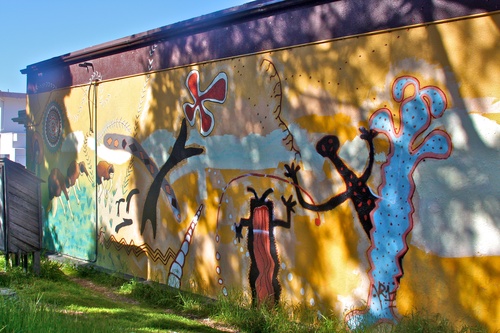 In 1994, local artist Richard McLaughlin (an alumnus of the College of Creative Studies at UCSB) painted this mural on the north side of Anisq'Oyo' Park. The mural includes images similar to the historic art at Chumash Painted Cave in the nearby Santa Ynez Mountains. This mural is in the Santa Barbara Arts Commission's list of public art.

Unfortunately the mural is in bad shape now, with sections painted over because of graffiti. It's on the IVRPD'slist of mural locations suitable for repainting. You can see some of what it originally looked like by going toMcLaughlin's gallery of work, clicking the arrow on the right, and selecting the two yellowy thumbnails at center left. 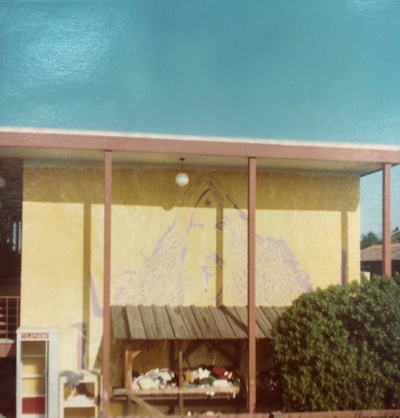 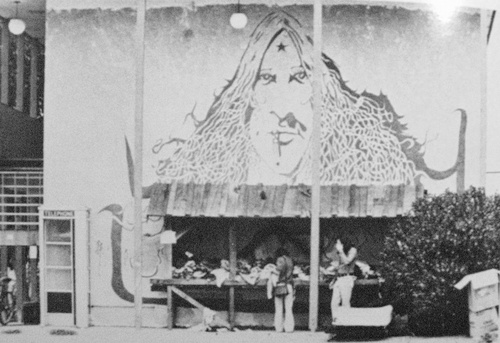 From the A.S. UCSB Living History Project, cited as by Randy Rosenthal.

He was behind the table that served as the Isla Vista Free Box at the time.

The building also had a painting with a directory of the services inside it. 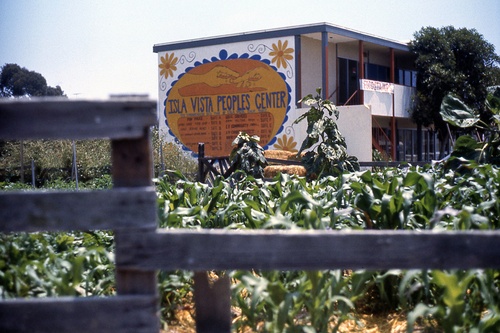 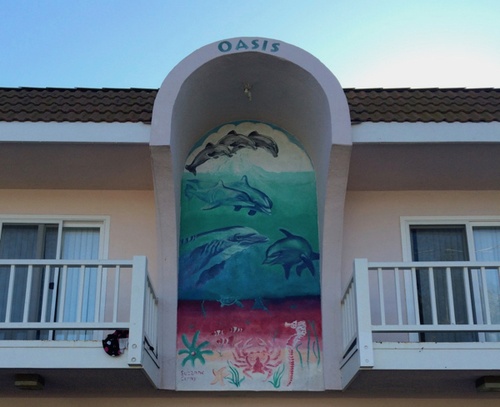 January 2015, by Britta Gustafson (CC BY-SA)The apartment building at 6653 Del Playa used to be called the Dolphin House, because it had a mural in the arch with several dolphins, a crab, and other sea life. This has been replaced by a mural of a woman wearing a shirt that says "Ganja baby". 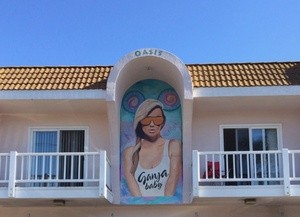 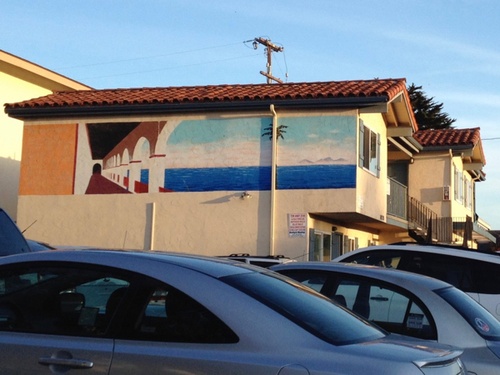 April 2012, by Britta Gustafson (CC BY-SA)The apartment building at 1020 El Embarcadero Rd used to have a mural with a painting of an island-view building with arches. The Koto Group became the property management company for the building, and they repainted it in their standard grey-green color scheme. 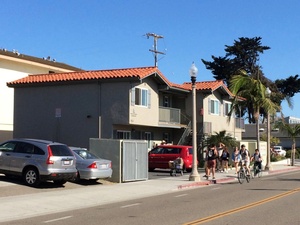