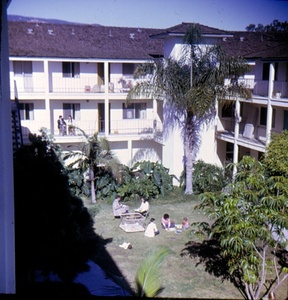 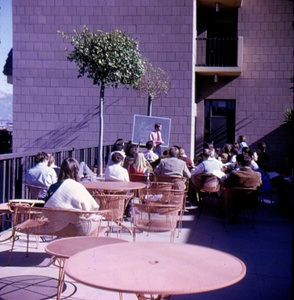 Maharishi International University was founded in 1973 in Isla Vista by Maharishi Mahesh Yogi. It was a small college that rented classroom, office, and dorm space for a year at 6689 El Colegio Road (Garden Court Apartments) and Francisco Torres (now the UCSB-owned Santa Catalina dorm).

Context in Isla Vista at the time

After the riots in 1970 (see Bank of America), IV's UCSB student population dropped, but it still had many large apartment buildings constructed during the student enrollment boom in the late 1960s. These buildings were probably extremely cheap to rent at that time, leading to unexpected adaptations like housing a new college. Almost next door, Friendship Manor opened in 1973 too, as a retirement home converted from a student dorm. 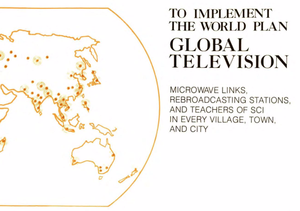 From the catalog 1974-1975MIU was founded by Maharishi Mahesh Yogi as part of his "World Plan" to teach his meditation method, Transcendental Meditation, and his related concepts about consciousness to the entire world. It taught "the Science of Creative Intelligence", offering undergraduate and graduate degrees.

College catalog 1974-1975, including the Garden Court address. The catalog goes into great detail about the World Plan and the Science of Creative Intelligence.

Photos of MIU at Garden Court Apartments and Francisco Torres in 1973, from a person who took classes there.

From another student's story: "The original campus of MIU was in an apartment complex in Isla Vista, a suburb of Santa Barbara. IV -- immortalized by the Beach Boys as the place "where police felt so harassed" -- was every hippy's fantasy utopia. The city was closed down to cars and the streets were turned into flower gardens. The branch of the Bank of America was right across the street from the lot where the Yippies had burned the old bank to the ground. It is probably the only bank in the country that lets in dogs and naked children. I loved the place." 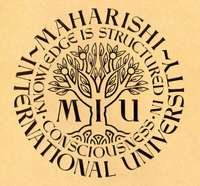 "Knowledge is structured in consciousness", logo from the catalog 1974-1975MIU's history says "Before long, MIU’s small Santa Barbara facility, a rented building complex near the University of California, was crowded with students." In 1974, the school purchased and relocated to its own campus: the former campus of the bankrupt Parsons College in Fairfield, Iowa.

The university still exists today as the Maharishi University of Management, with an enrollment of 1800 students. It gets bad reviews from students and alumni.