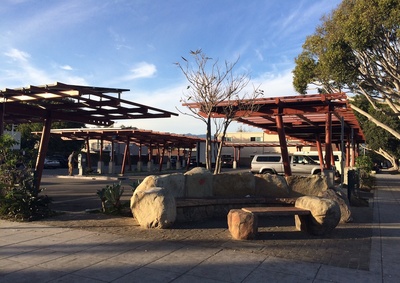 The Pardall Solar Parking Lot (881 Embarcadero Del Mar) is a public parking lot on the northwest corner of the intersection of Embarcadero del Mar and Pardall Road, convenient to nearby restaurants and other businesses in downtown IV. The lot has public pay parking during the day ($1 for 1 hour, $3 for 2 hours, $12 daily) and free parking in the evening after 8 pm (and before 7 am). It also has some reserved spaces for the Plaza Lofts apartments across the street. It has solar panels on the covering that power the lighting and the parking ticket vending machine. There are a few electric vehicle charging stations. 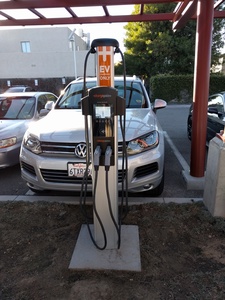 A county document about the parking lot says "The site was previously used as a gas station which utilized Underground Storage Tanks (UST). Prior to discontinuation of the gas station use, the tanks leaked hydrocarbons which contaminated the onsite soils. The soils were adequately remediated for the parking lot use and an impermeable membrane was placed over the native soil and below the parking lot surface to prevent any surface contamination from underground contaminants." The rest of that document also has a lot of interesting detail about why the parking lot was constructed and about its transition of ownership from the redevelopment agency to the county.

According to a Daily Nexus article about the opening, the lot cost $760,000 to build, and the sustainability features were meant to help reduce water and power costs over time. (The land cost $1,405,495 to purchase.) It couldn't have shade trees in the main part of lot because of the membrane for containing the pollution. Another news site has a tiny picture of the opening ceremony. 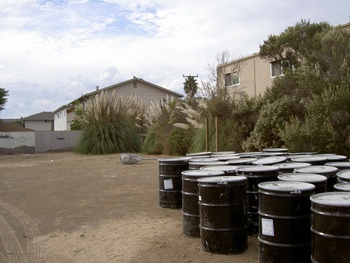 Back when it was an empty lot sometimes used for storage for county construction projects. The fluffy-looking plants in the back are pampas grass, an invasive weed. Pampas grass has an interesting history in the Goleta area. October 2008, by Britta Gustafson (CC BY-SA). 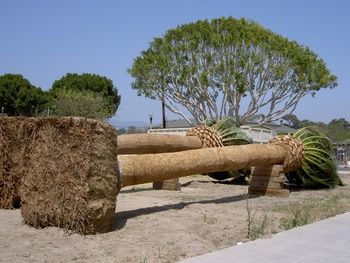 The empty lot with palm trees that were soon to be planted on Pardall Road as part of another redevelopment agency project. April 2009, by Britta Gustafson (CC BY-SA).

All types of parking in IV are a big deal - it's a densely populated place with a lot of people and a lot of cars, and residents and visitors complain about not enough parking. Part of the problem is that some UCSB students try to park their cars in IV long-term (or regularly, when attending classes) in order to avoid paying on-campus permit prices, since street parking in IV is free and doesn't require permits.

This is also an important example of a project that the now-dissolved Redevelopment Agency did - taking a polluted lot and turning it into something that makes downtown IV more attractive to visitors (by providing easier parking for customers of local businesses). The county-owned lot also supports flexibility and density in new housing developments by giving them an opportunity to put their required spaces in this lot instead of on their own property.