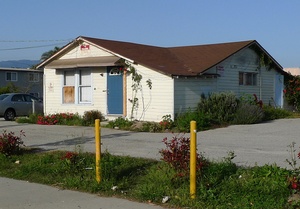 870 Camino Del Sur or 880 Camino Del Sur. April 2010, by Britta Gustafson (CC BY-SA)Isla Vista had only a few houses before UCSB moved in next door in 1954, and this tiny house alone in a parking lot was clearly one of the few structures built before student housing developers arrived in the 1960s - based on aerial photos (see below), the house was probably built between 1938 and 1947. This whole lot seemed to belong to the church next door (United Methodist Church), but a family seemed to live in the house.

In early 2012, a new student housing project called Campus 880 (more about it) demolished the existing buildings on this large lot, which had been empty except for this house and a long-unused daycare building with a nice ocean mural (see Lost Murals of Isla Vista).

In its place, they built a very large, modern-styled student housing development. The hard lines and bright colors look out of place in this beachy neighborhood, but it's a big infill project on an unused lot, and there has been pressure for more housing as UCSB expands. The university also has a huge incentive to encourage fancy new developments because Isla Vista has a reputation for being messy and run-down.

There is something to this neighborhood though, the unfinished edges and undeveloped lots and freedom to put a couch on your lawn and sit there, or a strange little house that doesn't tell its story. Public documents like the environmental impact report for the project (and South Board of Architectural Review meeting notes) seem to imply the house was part of the old daycare facility, which doesn't really make sense: "Approximately two-thirds of the project site is currently undeveloped, with dirt and ruderal vegetation, while the remaining area is covered with a parking lot used by the church and three single story buildings that had been used as a day care facility in the past." It's also not clear what they meant by three buildings, since there seemed to be two. 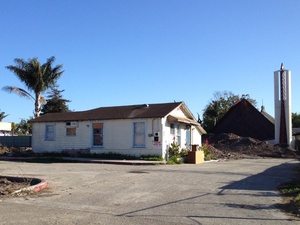 With the church in the background, after groundbreaking started for building Campus 880. February 2012, by Britta Gustafson (CC BY-SA). 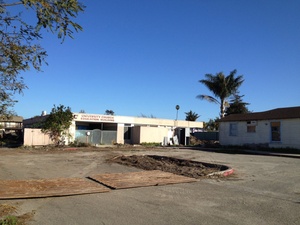 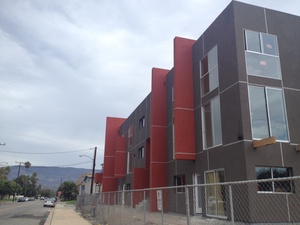 The University Church Education Building was the location of the Isla Vista Children's Center from 1971 to 2004 (renting it from the church), when it moved to a new location on Phelps Road (where it is still the Isla Vista Youth Projects). There's a photo on their Facebook page of the play structure and building. It may have been empty from 2004 until getting taken down in 2012.

The UCSB Interactive Campus Map includes aerial photos of the UCSB and IV area from 1929 to 2012 (click "Layers" and scroll down to "Historical Imagery"). This is fascinating when trying to understand the story of this house. In "going back in time" order, supplemented by photos from the UCSB Special Collections Library for 1956 and 1947:

2006: The parking lot is clearly there with its lone house, and some kind of garden is connected to the education building. 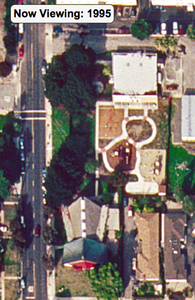 1995: The house is probably there, but hidden by large trees, and it's in a green area instead of a parking lot. The education building garden seems to include a play structure. 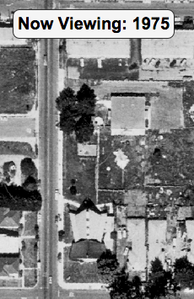 1975: There's an odd white patch, but the house is still presumably hidden under the trees. There's not enough detail to tell more. 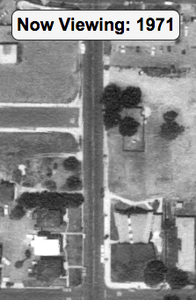 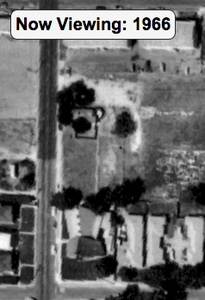 1966: The shadow pattern makes it look like there may be a house under the trees, but it's still hard to tell. 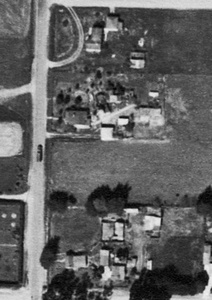 1956: No tall trees mean that we can definitely see a house in the right spot here. It looks a little small, but I wouldn't be surprised if the house had some alterations over time - note that the front was asymmetrical. There's no church here, so the church was built between 1956 and 1966. 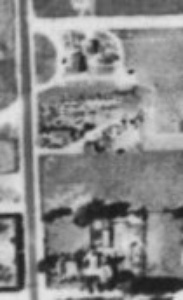 If you look at the Interactive Map's photo from 1938, there's nothing in that spot. So, if photo guessing is approximately right, this house was built between 1938 and 1947. This makes sense for the style of the house - it looks like other 1940s houses, especially in the "Minimal Traditional" style that was typical between 1935 and 1950.