In the early 1960s, Isla Vista had a reputation as a "sleepy college town," whose residents were "leisure-oriented."

Since 2002, UCSB has been featured as a "top party school" by various publications, including Playboy Magazine, The Princeton Review, and BroBible.com. These publications often cite Isla Vista's atmosphere as being a part of the determination. 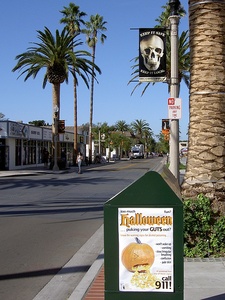 One of IV's most well-known parties is Halloween - see also Halloween in Isla Vista on Wikipedia. The Halloween celebrations in Isla Vista began in the 1960s, but were much smaller at that point. 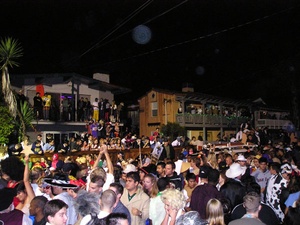 Halloween on Del Playa in 2003 (public domain)Isla Vista's Halloween celebration was not particularly newsworthy until 1978, when "nearly 200 revelers turned violent against two policemen." In 1978, 600 people rioted on Halloween after two police officers were hit by bottles thrown off of a balcony. The following year, posters were placed around Santa Barbara attempting to stage another riot. Because police were prepared, this second riot was ended quickly.

In the early 80's the number of partygoers increased greatly, perhaps due to the spread of word following the two riots. Isla Vista became infamous for its Halloween celebration throughout the 1980s. From 1980-1985, attendance steadily increased; from 1980 to 1984, the number of attendees grew by 1,000 people each year until 1985 when the number grew to 10,000.

In 1986, attendance rose to 30,000, with many of the students visiting from San Diego State University. This was the start of the school, and the county's attempt at dissuading people from attending.

Halloween remained an increasingly popular event throughout the 90s. It is rumored that this was due to an article published in Playboy Magazine detailing Isla Vista's Halloween celebration. However, this is untrue, and UCSB did not even rank in Playboy's 1987 Top Party Schools list. However, since 2002, it has been featured five times.

See the Floatopia and Deltopia article. The Deltopia celebration attracts many revelers from other areas. In 2014, the event attracted 20,000-25,000 attendees.

Other notable aspects and events

In 2007, a number of pornographic films were shot in Isla Vista, notably at the Tiki House.

The YouTube channel sbpartyscene.com, which features many videos of parties within Isla Vista, has over 2.5 million video views.