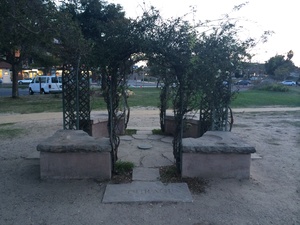 The Perfect Park Peace Monument was dedicated in Isla Vista's Perfect Park on June 10th of 2003 to the anti-war movement during the Vietnam War. The plaque says "In a spirit of remembrance, inspiration and reconciliation, we commemorate the people who worked for peace, justice and nonviolence in Isla Vista and elsewhere during the Vietnam war era."

A good way to get started with understanding this monument is to read Bob Potter's speech at the dedication ceremony, a vivid telling of the story of IV's activism in 1968-1970 and the establishment of Perfect Park as a formally recognized park with this monument.

The A.S. UCSB Living History Project blog has a summary of this work: The Isla Vista Peace Monument, dedicated by Bob Potter on June 10, 2003 after years of organizing, commemorates struggles for peace, in particular that in IV in the late 1960's and early 1970's. The last of the Isla Vista riots, `I.V. III’ culminated in the peaceful submission to arrest on June 10, 1970 of hundreds of community members in Perfect Park. During I.V. III LA Sheriffs had conducted violent raids in Isla Vista, bringing condemnation from across the political spectrum, and leading finally to the peaceful protest in Perfect Park where everyone chose to violate a curfew and be arrested. Criminal charges were ultimately dismissed against the protestors.

A Daily Nexus article said: "The Perfect Park Peace Monument Implementation Committee spawned from a movement to save Perfect Park, which was threatened by the development of St. Ignatius Church in the early 1990s. The committee has raised $25,000 in private donations to pay for the monument. Potter attributes an increased public interest in peace movements to the war in Iraq. He said an article on the monument in the Los Angeles Times motivated an anonymous donor to give $9,000 to the fund."

The monument was designed by Colin Fraser Gray, a local artist.

There is also a plaque in front of Embarcadero Hall as a memorial to the student who was killed by police during the 1970 IV riots.