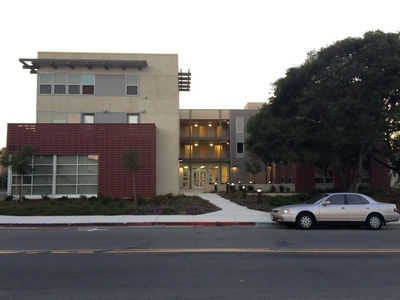 Opened on December 16, 2014, the Pescadero Lofts provide very affordable housing to members of the formerly-houseless population of Isla Vista. The complex has 26 studios and 6 one-bedroom apartments, with car and bike parking for residents. It's located at 761 Camino Pescadero, on the site of a former fraternity house.

The average initial tenant had spent the previous 14.75 years without a home and 3 of them had been houseless for over 30 years. The employed tenants pay 30% of their income for rent with prices ranging from $30-200 a month. In addition to shelter, there are on site mental health services, alcohol/drug counseling and job training resources available to all those who live there.

30 of the 32 initial residents had previously been incarcerated, and they had accounted for 14 emergency room trips over the previous three months. Providing them with housing was not only the right thing to do, but also could save money in the long run, as noted by County Supervisor Doreen Farr: "If we can improve their lives and at the same time save costs, that is such a benefit to our community."

An article in the Daily Nexus in May 2015, "Movement To Decriminalize Houseless People", said the project was "funded by the federal government and the Housing Authority of the County of Santa Barbara", and "selected applicants to take up residence at Pescadero Lofts were typically well known members of the I.V. community."

Pescadero Lofts uses a "housing-first" model, which the Independent says is the only of its kind in Santa Barbara. It has two employees on site to support the residents.

A study released in 2016 showed "a slight increase in the number of homeless in Isla Vista from last year but a decrease of nearly 50 percent since 2013." The 2017 survey also had a slight increase but overall a similar number: "Flacks said the “consistent” numbers are likely a result of homeless outreach organizations in Isla Vista such as the Pescadero Lofts, a complex that opened in 2014 to help keep homeless community members off the streets. The complex currently houses 35 people."