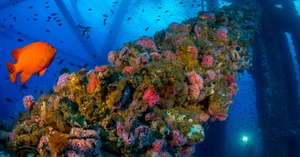 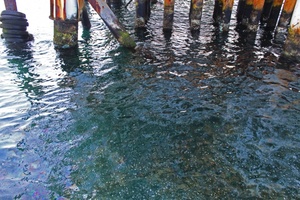 Platform Holly was completed in 1966, two years after the Atlantic Richfield Company (ARCO) applied for a lease from the state of California. The oil platform sits in 211 feet of water, approximately 2 miles off shore. Platform Holly extracts oil that naturally seeps from the ocean floor off the Santa Barbara coast, with its peak production output in 1984. In 2015, following the Refugio Oil Spill which spilled about more than 140,000 gallons of heavy crude oil into the Gaviota Coast, Platform Holly was decommissioned. Platform Holly, although not directly involved in the spill, was decommissioned due to Venoco filing for bankruptcy, as a result of their inability to sell the oil they were pumping, because of the damaged pipeline. Now seen as a part of the cultural landscape, Platform Holly has been in the process of being decommissioned for the last 2 years. The next step in this process is to plug the oil wells, and abandon them, which will take anywhere from 18-24 months. Once these wells are plugged, the state of California will decide whether to decommission the oil platform by means of full, or partial decommission. Based on the net environmental impacts of Platform Holly on the coastal ecology, the state will decide which form of decommission environmentally makes the most sense.

As argued by Dr. Love of the Love Lab at UCSB, Platform Holly (as well as other oil rigs) acts as what he calls a de facto reef, meaning the oil rig was not built to be a reef but it acts as a reef. The importance of these de facto reefs depends on the platform itself. Some platforms are better than others, but in general, they all produce higher numbers of certain fish in southern California than the surrounding natural reefs. Through studies done by the Love Lab, it can be determined what fishes lives there--some species include calico, copper, gopher, and vermilion rockfishes, pile, and sharpnose seaperch, and lingcod--and compare their numbers to those of fishes living at natural reefs and if it can be proven that Platform Holly has a net environmental benefit, Platform Holly can be considered to be given the partial removal option. Around 45 to 50 species of fish have been found around Platform Holly, but there are no species of fish that are only found at Platform Holly. However, there are some species of fish that are found in higher densities at Platform Holly than at most natural reefs and that’s because of how the platforms turn into reefs. The reason oil platforms become homes and nursery grounds for fish is because of their massive size that covers the entire water column, stretching from the bottom of the ocean floor to the surface of the water. When fish in southern California leave the larval phase and become larger, adult fish, they search for something hard to settle on and, as said by Dr. Love, the fish don’t care if it’s a reef, a sewer line, or an oil platform.

Given that natural reefs are so deep below the water and aren’t very tall, platforms such as Holly make for easy homes. This is on the positive end of the spectrum for Platform Holly, but the de facto reef the platform serves as led to the destruction of the natural habitat. All the natural habitat used to be was mud, but the construction of the platform led to the location it sits on being replaced by steel and shells that fall off the platform that now cover the mud, forcing out all animals that lived in the mud. Looking further into the effects of Platform Holly, one potentially negative ecological impact as well as one potentially positive negative ecological impact relate to natural seepage. Dr. Love claims that it is merely speculation, but the oil that comes out of the natural seeps on the ocean floor can have negative effects on small marine life such as plankton if they ingest some of the highly toxic hydrocarbons that break off of the oil as it degrades. However, it is hypothesized that Platform Holly relieves some of the natural pressure under the ocean floor and reduces the amount of natural seepage, this being the positive effect.

Finally, when Platform Holly was active, drilling for oil led to all sorts of pollution, but nothing in significant amounts. The drill bits had to be lubricated and the lubricant itself had heavy metals in it and that would end up in the water and settle on the seafloor or get carried away by the current. When drilling, not only would oil come up but it could contain water from underneath the ocean floor and that water also contained heavy metals that could either settle or spread. Dr. Love conducted a study on fish and pollution levels near Platform Holly as well as nearby reefs and found that the fish had no significant differences between the fish from all locations in regards to pollution levels in the fish. However, this does not mean that there aren’t any pollutants at all, it just means, as stated, they may be in such small amounts or they aren’t getting into the fish. The shell mounds that cover the former mud habitat have had heavy metals gather inside them, but the shell mounds continue to get larger and prevent the heavy metals from becoming biologically available. 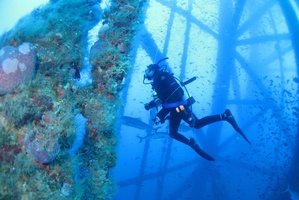 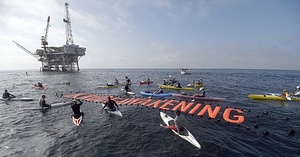 The current state and future decommissioning of Platform Holly is highly controversial. Carla Frisk from Get Oil Out! disagrees that the oil rig acts as a reef and believes it is the oil company's responsibility to remove the infrastructure. Frisk states that leaving the platform in place would reward polluters and oil companies and lead to a slippery slope scenario in which the public felt it was acceptable to dump other appliances into the ocean. Although they share different views on the platform’s role as a reef, both Ms. Frisk and Professor Love agree that the original purpose of the oil rig and our dependence on fossil fuels is extremely detrimental to the environment and is not sustainable.

The process of removing a rig and cleaning the site, known as decommissioning, is complicated and expensive, and includes plugging and cementing wells to make them safe.

A total decommissioning means the removal of the entire structure and would destroy any reefs or sea life living in or around the rig. In addition, the complete decommissioning process in itself produces a fair amount of air pollution and contributes major greenhouse gases to the atmosphere.

On the other hand, in a typical rigs-to-reefs effort, partial decommission only removes the top portion of the rig, usually to a depth of about 80 feet, so that they don’t pose any risk to ship hulls. The rest of the rig remains in place as a haven for sea life and for recreational diving or fishing. This form of decommissioning does require ongoing maintenance to ensure the structure of the rig is intact.

Needless to say, the future of Platform Holly is highly controversial, political and complicated. Local opinion on the matter is mostly subjective with little scientific research. As a result, the community is attempting to make informed decisions regarding the future of the oil platform, while lacking the data and research to do so effectively. As a result, it would be beneficial to conduct more research on the local ecological impacts Platform Holly currently has on its surrounding environment, in order to responsibly decommission the oil rig. By doing this, we can have reliable data that would let us see the net environmental impacts the platform has, and explore our options with how to go about Platform Holly’s decommission. 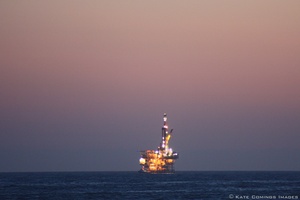