Isla Vista has what you might call a weakly constructed power grid. The grid seems to be piecemeal and sensitive to disruptions. The trouble comes from the many pole transformers that link between the sections. The wires can be heard on the foggier of nights humming, buzzing and sometimes, crackling. Being unincorporated the town of Isla Vista tends to not get the same attention as incorporated municipalities when it comes to infrastructure, and the power system is a good example. Repairs tend to be done as needed, basically meaning a power transformer has to fail before being replaced. Often one transformer can take out or block two buildings, leaving them in the dark. More rarely the failing transformer can cause a cascade of failures, or, because of its core location on the grid, cause half the town to go dark. Other causes include trees falling, wind, and fires.

Isla Vistans usually take a widespread outage as a sign to get out of the house and commune in nature, on the street, by burning couches. While sometimes the cause of a power outage, almost any excuse to set fire to a couch is used, and so sometimes within a few minutes of an outage several couches are set ablaze. In one outage lasting no longer than 15 minutes, 3 couches were set on fire. Besides arson, impromptu street parties sometimes erupt, using portable battery powered music systems and lighting. 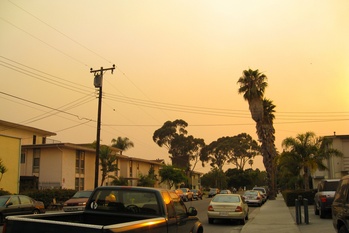 The large regions in the mountains north of the town are a notorious source of wildfires, and several in the recent past have caused power related issues for Isla Vista. These have caused some of the longer duration outages. While it's all fun and games for an hour or two, serious problems develop when the outage stretches over several days. Most of the apartments in Isla Vista use electric stoves, which become useless during an outage. While you might be able to go to a friend's house and cook on their gas stove by flash/candle light, not everyone will have that option. If the outage includes the Embarcaderos, this further deprives the more than dependent residents of the only other source of cooked food in town. 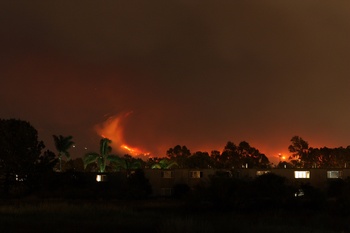 Jesusita Fire seen from near Camino Corto in IV, May 7, 2009. By Sam (popilop) (CC BY-NC-SA).In 2008 during the week of July 1st, the hills above Goleta began to conflagrate, later known as the Gap Fire. The brush had not burned for well over half a century and contained some very volatile fuel. The proximity to Isla Vista and a change in the winds during the the evening of the fourth of July led to a heavy ash fall and several sporadic power interruptions. The evening sky, darkened by the lack of power, was backlit by fire. It was as if the apocalypse had finally caught up with the sinners in Isla Vista. From the bluffs above the beach the scene was beyond surreal. Even Freebirds was closed. Some restaurants (such as Rosarito) had a limited menu, and other stores like SOS Liquor sold booze by flashlight. In the end, the town was fine, receiving the not uncommon dusting of ash that arrives during the fire season, and the power was restored. It was a bad day to do shrooms, or any other psychedelics for that matter, as any number of residents can attest to. The Gap Fire continued to burn for another several weeks, finally being contained on the 29th of July.

Perhaps with the newly built commercial center on the loop and newer buildings being built elsewhere, there could be more pressure to improve the power and related infrastructure of the town, but it's not clear whether any actual improvements are going to happen.