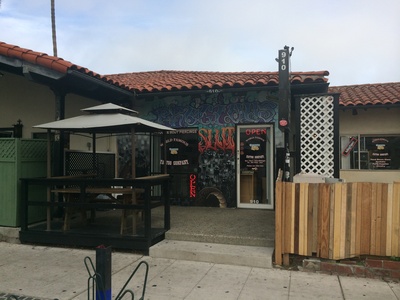 Precious Slut is a tattoo parlor. They also do piercings, as well as sell "stylish beach style clothing, smoking accessories, glass art, and a beautiful selection of body jewelry, including gold and platinum".

From "Ink runs in many directions: the changing shape of tattoo culture" in The Bottom Line, February 2011: "“We are tattoo culture in Isla Vista. Beyond these doors it just doesn’t exist,” said Schmoe, one of the artists working at Precious Slut who specializes in photorealistic black and white portraits. “I’m from Oakland and artists used to turn and pray to Oakland five times a day, that’s how powerful tattoo culture is down there. Here, it’s just sad.” Another artist, known as Jinx, said Isla Vista is full of wanna-bes. “It’s about being an outcast by choice, and those guys just don’t have the intention. A lot of kids here in IV are posers—just the truth. Getting a tattoo seems to be much more like a way of rebelling against mom and dad for them,” said Jinx."

In about 1970, this storefront was a used clothing shop called Rag Theatre. As seen then and now from a similar angle: 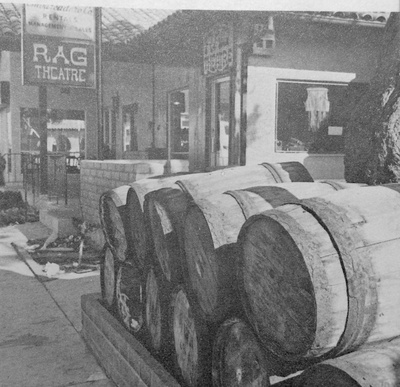 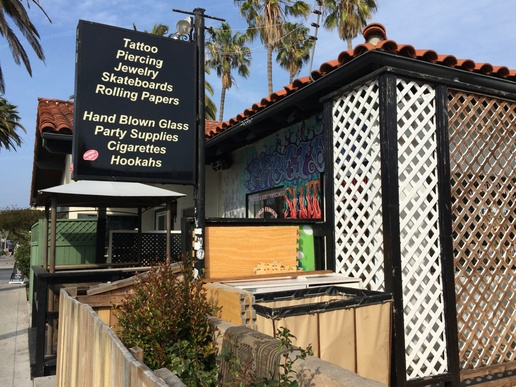 A 2007 Independent article about a filmmaker, Richard Elfman, has a quote from him about Rag Theatre: “I didn’t go to college : but I clothed those who did. My stores, one adjacent to UC Berkeley, the other to UCSB, were named Rag Theatre and intended to help fund underground films. When a group of seemingly upper-middle-class white kids burned down the Bank of America in Isla Vista, we could feel the heat from our store’s doorway. Thank God they didn’t burn down the Magic Lantern Theater as well-or we wouldn’t be able to have a party and screen Forbidden Zone there next week!”

Precious Slut is part of the same building as Dublin's, which may get torn down together and turned into a new development called "The Nest" in the future. The Dublin's article explains more about The Nest.