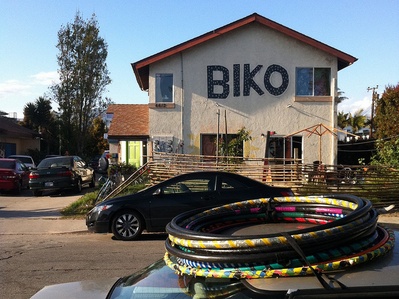 Isla Vista is home to several co-op houses. As of 2019, there are six houses in total, five of them located within Isla Vista - Newman, Manley, Dolores, Biko and Merton, and one downtown Santa Barbara, Persimmon. The cooperatives are managed by the Santa Barbara Student Housing Co-Op organization, and each are run internally by their residents. Each building or house is organized differently in architecture as they were purchased after they had been built for another use. Newman was formerly an apartment structure and has individual units; Manley, Dolores, and Biko are actually designed as multi room residences; Merton was the former University Religious Center, and was converted into a living space; Persimmon, is the newest house in the group. Each one of the  houses definitively has its own specific character.

How the coops work

The coops are all decorated by their residents. This means any number of hand drawn or painted walls, ceilings or surfaces. It is not uncommon for new residents to repaint their rooms to their liking. Most have inspirational, memorable, or poetic writing of one form or another on the walls/ceiling of the public spaces.

Meals are made by and or for every one, and decided democratically. Meals tend to lean toward the vegetarian or vegan direction but meat is also consumed by any number of the residents. You will find most coops have large very well stocked kitchens and pantries. Cookware is often brought in by tenants and shared. As with many other aspects of the town, cookware and food often gets left behind after a resident moves out, leading to an accumulation of both in the kitchens. 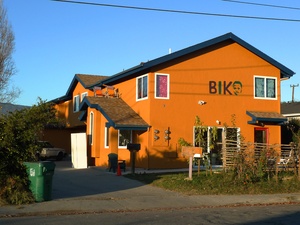 Biko, probably the most prominent, sits behind the north west corner of Sueno and Camino Pescadero and is readily visible as you pass by on Sueno. It has "BIKO" stenciled on the out facing wall, which is hard to miss. It is a large two story house, rectangular with a pitched roof.

On the same property across the driveway are several detached garages that act as a venue for musical performances. There is a regular scheduled set performing at Biko on specified weekends. It is not uncommon to walk past or into the packed driveway while a band or other performer blasts music that can be heard for several blocks. The garages also act as art and performance studio and are used for exhibition of such activities.

The interior of the house is somewhat maze like. On the first floor on the side toward Sueno is a small common area, used as a den. Along the east wall is a hall leading to several rooms and the main dining area and kitchen which is about a third to a half of the first story floor plan. In the same area is the main entrance, coming from the driveway, and staircase leading to the rooms upstairs.

Manley, is located on the north east corner of Embarcadero Del Norte and Cervantes. It is a block from campus and a block from El Colegio, but manages to be in a strangely calm part of town. Another two story building laid out very different from the other houses, Manley is built like a duplex. The second story is accessed via an external stair case.

Manley unlike Biko is quite quiet and reserved in terms of its attitudes, but just as laid back. One can expect a quiet evening in with friends or a fun night of games or movies in the large open common area. The Common area on the first floor has the living and dining rooms off set from the kitchen in and open floor plan. The kitchen sits in the south east corner with the living room to the west and dining room to the north, and has a medium sized island in the middle. The island is usually covered in food and cooking utensils. Behind the dining area is a hallway running east that leads to the first floor residences.

Dolores, named after civil rights activist Dolores Huerta, is nestled in and set back on the south side of the 6700 block of Sabado Tarde. It has a fence and green yard that prevents it from being easily found and identified unless you know what you are looking for. Of the group it is designated as the vegetarian/vegan/cruelty-free house, and most meals prepared are of the same nature.

The main entrance faces the driveway and is off the kitchen dining area. The kitchen faces the street and has a large window facing out. There is an atrium that has stairs leading up to the second story and to a hall with other small common areas and private rooms, on the first floor. It has a very constrained floor plan, and lacks the more open common areas that you might find in Manley. It has a very rustic country feel to the interior and backyard. It has a fairly large back yard that faces toward the ocean. Unlike Manley it is located in a more busy portion of town, only a block from the shenanigans on DP. It has also been known to host house parties now and again. 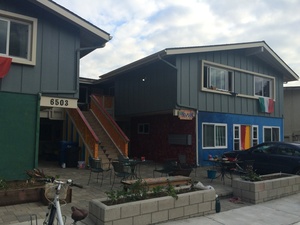 Newman is placed right against campus on the end of Madrid. It consists of six 2 bed 1 bath units and 3 studio apartments. Each unit has it's own kitchen area and as such differs from the other houses in that there are not house common meals. Potlucks are common however and food sharing is prevalent. The units are decorated by residents and the yard acts as the common area. Besides the differences, it operates much like the other houses and has a deep knit community bond between the people living there. Because of the architecture, Newman probably offers the most privacy of any of the houses. 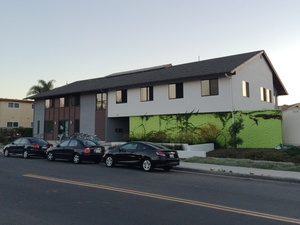 Merton is set on the 700 block of Camino Pescadero, directly across from the intersection of El Greco. Formerly the University Religious Center, it maintains its role as a space for discussion of interfaith understandings. The proceeds of the sale are being used to fund scholarships for the interfaith residents, that can be obtained through the UCSB Financial Aid Office. Being a former public building Merton has accommodations like larger common areas, public style common use bathrooms, and a lift, making it the most friendly to people with disabilities.

Persimmon is located on the Westside of downtown Santa Barbara in a calm, residential neighborhood, close to State Street and transportation. Persimmon is a two-stories house, mostly home to graduate students, non-traditional students, young professionals, and co-op alumni ; it has seven rooms, a large peaceful yard with fruit trees and space for barbecuing, and a separate garage that can be used for social activities. House and board charges cover electricity, water, trash, gas, fast wireless internet in all the rooms, and a meal plan.

More about how the coops work

The residents prefer to live private lives, and are protective of the space. While guests are welcome, some times it is hard to just pop by and look inside if you don't know some one in the immediate interior, or are unable to name drop a well known resident. As happens with many friends, people some times show up and then don't leave. Sleeping on couches and mooching food from the residents that are paying rent, can be a drain on resources and tends to grate on friendships. Some times people will help out with rent while camping out in a common area while they are in between housing, and while this is usually frowned upon by many residents, it is permitted. There is usually a waiting list for each of the houses and wait times could be as long as a year.

Living in close proximity to other people and having common and shared spaces can lead to a great deal of drama and political discord. Romance and the failure there of, and or the differences in how people perform their chores and responsibilities often cause clashes. Sometimes it is just badly matched personalities. Whatever the reason, the choice of individual needs to match the household norm and people usually come and go until an equilibrium is reached.

The residents are mixed. Mostly composed of people with open politics and equally open minds, the residents lean left in most cases. Besides that you will find a well balanced mix of individuals from all walks of life and many interesting backgrounds. The age range is equally spread across the gamut. Most are students and vary from freshmen to grad student and post doc, and some are just people who work locally looking for a fun open community to live in.

The main site to the Santa Barbara Housing Co-Op can be found at http://sbcoop.org/.