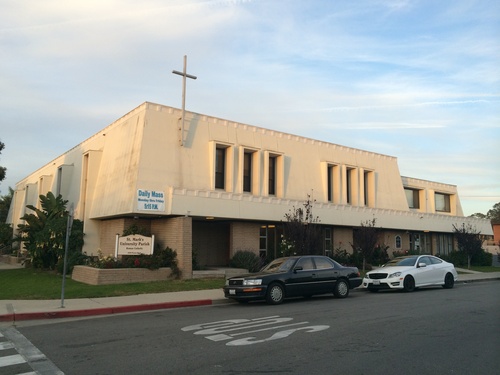 St. Marks University Parish is a Catholic church, founded in 1965-1966. Reverend John Love serves as pastor. A Noozhawk article says "Professors and locals often attend Mass, but Love said about 80 percent of the parishioners are students...Love follows the late pope’s example and says he tries to help students by communicating God’s love more than his law."

The modern building and dramatic mural

The Independent says "Saint Mark’s is unusual, in that the space itself is less formal than the usual cathedral or traditional church. The decor is very contemporary, with the Communion altar in the center of the room...the service itself is quite traditional. Incense burns in a bowl on the altar, and Communion is offered at every service."

The building had some renovations in 2002, and that article also describes the art in the church: "Lalo Garcia, an artist from San Fernando, painted the portrait of our Lady of Guadalupe...At the back of the main worship space a large modernistic mural hangs from a mobile track. The mural, painted by UCSB student Michael Dvorcsak in 1966, was originally at the front of the church. The mural, which features a cosmic representation of Christ, was allegedly inspired by the theories of Jesuit scientist and theologian Pierre Teilhard de Chardin who said, “Christ invests himself organically with the very majesty of His Universe.”"

An image and explanation of the mural, from the 1968 UCSB La Cumbre yearbook: 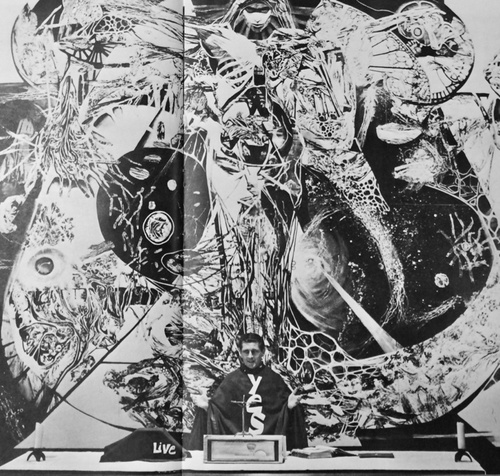 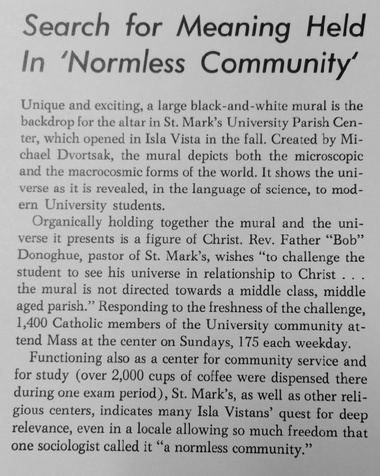 The correct spelling of the artist's name is Michael Dvortcsak, who graduated from UCSB and is an accomplished professional artist.

The mural was also described by the Isla Vista Free Press in the April 13-19, 1988 issue (page 10), quoting a pamphlet from the church as saying the painting makes "... a statement about the universe, about God, about Christ, a ... statement made in... science ... the language of the university. ...We wanted to show that our world, seemingly divided in so many ways -- spiritually, intellectually, socially, and economically -- really is not. It is one."

Their website describes plans to hopefully renovate the building: "For example, the facade renewal is not just gingerbread, but the new design addresses two practical problems that have plagued the church since its original construction almost fifty years ago: constant roof leaks and the lack of a theologically clear and highlighted entry way into the interior of the church. A proper kitchen and small hall will also be beautiful, but anyone can understand that this addition will address ways our parish can reach out and gather hungry students and other parishioners who want to gather and learn about their faith while sharing in a meal."

There is another artist's rendering of the planned remodel in this document.