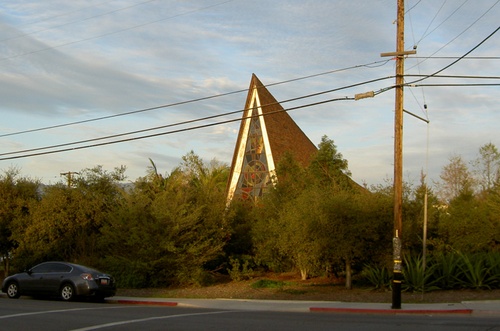 St. Michael's University Church (at 6586 Picasso Road) is an Episcopal church that describes itself as "an inclusive, welcoming and progressive community", serving both students and local families and other permanent residents. It has a garden, meditation and yoga gatherings, AA meetings, prayer groups, and other community programs. It was established as St. Michael and All Angels Church in 1954 and has an unusual triangular building with a stained glass window, built in 1963. 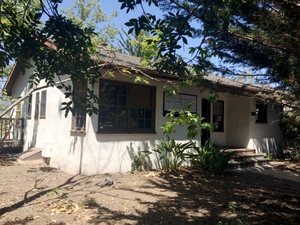 From a Santa Barbara News-Press article on September 24, 1994 ("St. Michael's enjoys 40 years of service in I.V." by Bob Barber), the church "was founded as a mission of Trinity Episcopal Church, Santa Barbara, in the fall of 1954", as the first church near the new UCSB campus, which opened that year (when Isla Vista had a population of about 500 people, mostly low-income people in small cottages). Trinity leaders had bought the property in 1949 for $5,000 as the new campus was being planned, and the church started with a brick chapel and chaplain's house that opened in March 1955. 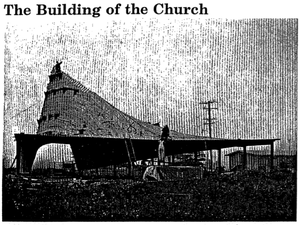 From St. Michael's University Episcopal Church: Our First 40 Years by Mark Gardner, a church publicationA church publication by Mark Gardner in 1994, St. Michael's University Episcopal Church: Our First 40 Years, says that the Isla Vista Improvement Association started meeting in the brick building in 1955, as one of the few public buildings in IV (pretty much the church and the Isla Vista Market). The Association worked on zoning regulations and planning for the community, and "'...were the same ones who had come out there under economic pressures, squatted on the land, acquired it by tax sales, moved condemned buildings out there and in various ways had landed there by almost illegal means, by they wanted to improve the community.' In the early days the population of Isla Vista was a mix of Anglos and Latinos." (page 10). The first years of the church also included Devereux School students at services (page 11). In 1962-1963, after Goleta's growing military research and development industry brought a lot more families to the congregation, the church built the larger triangular sanctuary.

As more context on the founding of the church, the Wikipedia article about Isla Vista says: "The University of California, Santa Barbara moved to its new campus in 1954...A new, nationally prominent provost, Clark G. Kuebler, was brought in to lead the new campus...charged with developing UCSB into a first-rate, small, liberal arts college to complement the enormous "multiversities" of Berkeley and UCLA. Kuebler was a prominent leader in the Episcopal Church and helped establish Isla Vista's first church, St. Michael and All Angels at Camino Pescadero and Picasso." Kuebler became the UCSB provost in February 1955, but in November 1955 he was accused of soliciting a male undercover police officer in New York City, which was widely reported in the press, and with his reputation ruined, he resigned (described on pages 128-132 in this book). 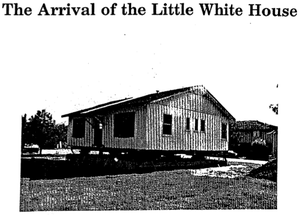 Also from St. Michael's University Episcopal Church: Our First 40 Years by Mark GardnerThe News-Press article has a summary of some of the church's projects: "St. Michael's Nursery School began in the fall of 1963, after an effort by congregation members led by school director Noreen Price. The school moved away in 1988. St. Michael's and Transition House opened a shelter for the homeless in Isla Vista in 1987 in a house that was moved from the Gaviota area. After the shelter closed in 1991, the building became the pastor's office, education room and site for Sunday child care. In 1971, the original chapel building was converted to Canterbury House, a residence for several Episcopal students (and one Lutheran) and a ministry center. Students meet at the house several times a week for prayer." The "little white house" moved from the Gaviota area in 1987 was originally one of the "dwellings for oil workers...on Atlantic-Richfield Co. property about three miles north of Winchester Canyon", and Caltrans required cutting in half to move it along the freeway (pages 47-48 of St. Michael's University Episcopal Church: Our First 40 Years). By the 1980s, Friendship Manor residents had also become part of the congregation (page 50).

The church has gone through a number of shifts in the proportions of permanent resident members and student members; in 1983 it renamed itself from St. Michael and All Angels Church to St. Michael's University Church as part of a shift toward focusing on students (page 42). 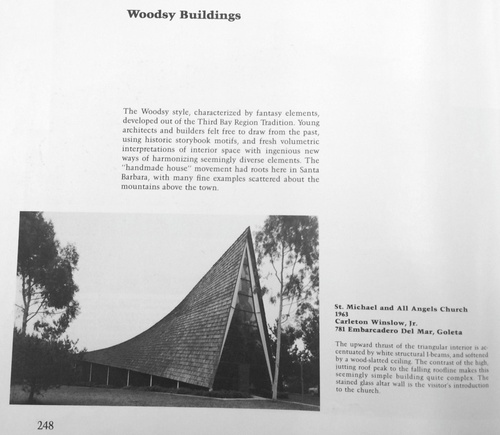 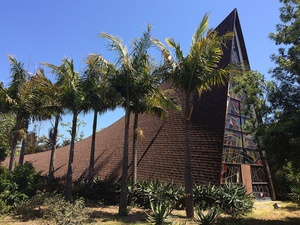 The News-Press article says "The church was designed, according to Pastor Mark, to resemble the tent the Israelites pitched to house the presence of the Lord during their 40 years of wandering in the wilderness. "The community of St. Michael's is composed of Bedouins, nomads who migrate here for a time and pitch their tents...Like Bedouins, we must be a people of great hospitality to the stranger.""

The book Santa Barbara Architecture features the 1963 church building as an example of Woodsy Style, on page 248 of the 1980 edition (with the Geodesic Dome House on the next page). It lists the architect as Carleton Winslow, Jr., whose father, Carleton Winslow Sr., was a prominent architect in Southern California. The book's description of the building: "The upward thrust of the triangular interior is accentuated by white structural I-beams, and softened by a wood-slatted ceiling. The contrast of the high, jutting roof peak to the falling roofline makes this seemingly simple building quite complex. The stained glass altar wall is the visitor's introduction to the church."

This is the interior with white structural beams and wood slats, as seen from outside the back windows: 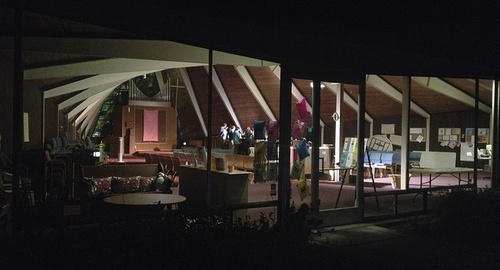 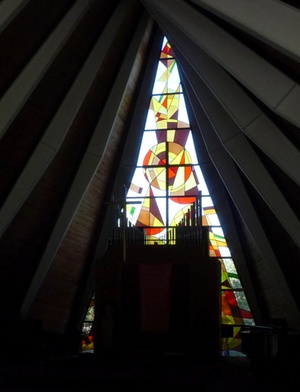 November 2011, by Britta Gustafson (CC BY-SA)From the News-Press article: "The 70-foot-wide clear glass at the entrance symbolizes St. Michael's openness to the university, the pastor says. The 37-foot-high stained glass window (recently damaged by a vandal) was designed by Vern Swanson, former curator of education at the Santa Barbara Museum of Art." Vern Swanson (also spelled Vern Swansen) has a painting in the San Luis Obispo Museum of Art and archives at Alpha Rho Chi at Cal Poly San Luis Obispo.

More about the window from St. Michael's University Episcopal Church: Our First 40 Years: "The window was assembled by the John Wallis Glass Studio of Los Angeles. Among the images of St. Michael combined in the abstract design are his jeweled crown, the trodden serpent, a pair of wings, a cross with a circle in the middle of it, and scales (Michael was said to be the weigher of departed souls). The glass was produced by the Cathedral Glass People of Indiana" (pages 18-19).

The chancel (altar area) was renovated in the early 1980s to have less of a concrete "bunker" feel and have more flexible furniture arrangements, with a new organ "from a mission in Los Angeles, Mt. Calvary on Slausen Avenue, which closed" (page 44). 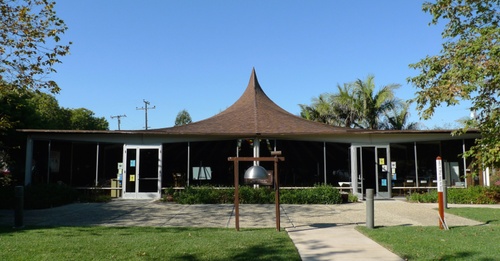 The story of the bell in the courtyard, from pages 20-21 of St. Michael's University Episcopal Church: Our First 40 Years:

On May 6, 1961, the congregation dedicated its "space bell" at an afternoon service. The bell actually was part of an Atlas missile titanium gas reservoir that received a slight dimensional imperfection during its manufacture by Arcturus Manufacturing Co. According to Sidney V. Petertyl, member of the Bishop's Committee and the person who arranged for St. Michael's to obtain the bell, one of the company's executives happened to give the missile part a "swift kick" as it was being loaded on a truck to be taken to the scrap metal heap. The kick revealed "its magnificent bell tone."

"The truck drove away empty, and Mr. McCormick (the executive) went home that night with a well-scuffed shoe and a determination to get some expert opinions as to whether his rejected missile forging would qualify for a church bell. He was directed to the famous stained glass studio of Horace Judson in Los Angeles, and there, after a shoe-scuffing, fist-bruising audition, the rejected forging was enthusiastically promoted to being a church bell."

The bell was christened "The Prophet Isaiah" during the dedication ceremony. The bell was seen as a modern-day sword-being-turned-into-plowshare story, especially appropriate because of the church's proximity to Vandenberg Air Force Base. The addition of the bell reflected the research and development industry's growing influence on St. Michael's. (Petertyl was an engineer with Servo-mechanisms in Goleta.)

Here is a short video of what the bell sounds like.

From an article about a Winslow Jr. church in Los Angeles County that was built in 1959 and destroyed in 2014, relevant to St. Michael's as well: "As a building type, houses of worship underwent significant transformation during the postwar era with both religious organizations and architects embracing new forms and building materials to express ancient concepts." "The often simplified designs of modernism that eschewed extraneous decorative detailing were particularly attractive to parishes with limited budgets, whereas traditional designs with decorative detailing could be cost prohibitive."

Also from that article, about this architect in particular: "Carleton Winslow, Jr., while not as well-known as his architect father, was a skilled local architect who specialized in ecclesiastical design...Winslow was a proponent of modern design for houses of worship...Architecturally, Winslow’s modern churches are emblematic of the modernism embraced in greater postwar Los Angeles."

St. Michael's is one of two angular modern 1960s church buildings in Isla Vista; the other is the United Methodist Church a few blocks away.