The origins of Isla Vista's street names and street layout are interesting since they're a direct line into the early history of Isla Vista.

The first four major streets (Del Playa, Sabado Tarde, Trigo, and Pasado) were named in 1925 by Pauline and John Ilharreguy. According to census records, John was a citrus farmer from France; Pauline's father was from Mexico; they lived on a farm in Ventura County. They were land speculators naming things trying to fit the general Santa Barbara Spanish theme. The east-west streets next to UCSB were named a few months later in 1926 by another set of land speculators who probably also weren't Spanish speakers.

Evolution of a Boom Town: Isla Vista, California, 1915-1968, a master's thesis from 1987 by Jennifer Hildreth Strand, explains this in a lot of detail, and the following sections are quotes from her thesis. 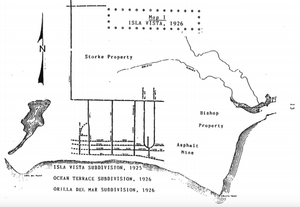 Isla Vista in about 1926. Page 13 from Evolution of a Boom Town: Isla Vista, California, 1915-1968."We know very little about Pauline and John Ilharreguy, but we have to suspect that something of an entrepreneurial, speculative fever infused them. In the 1920s instead of buying stocks on margin or watching the ticker tape like many other Americans, they tried a more distinctively California way to prosperity. Since the time of the gold rush, California entrepreneurs have found ways to profit from what nature provided. Sometimes this meant digging out gold and mineral deposits, sometimes it meant sowing seed in rich, sun drenched soil, and sometimes it meant grabbing up the land itself to sell at a higher price to later arrivals. In 1925 the Ilharreguys subdivided their land for sale in a way imaginatively designed to profit from much that was distinctive and alluring about their area. They called their subdivision Isla Vista." (10)

"It was oil that made up half the lure in Pauline and John Ilharreguy's real estate scheme. It was to be a residential ocean view subdivision that offered a chance to share in oil profits at a minimum risk. The Ilharreguys divided the beach frontage into narrow, twenty-five foot wide lots. Forty-five lots made up a section and there were two full sections." (12)

"The Spanish name "Isla Vista" given by the Ilharreguys to their subdivision was in keeping with a Spanish colonial theme then in use by Santa Barbara as it rebuilt itself following the earthquake." (14)

"One thing we do know about the Ilharreguys is that they were not good at Spanish. Isla Vista was ungrammatical Spanish for Island View, and mistakes carried over to the names for the four roads that ran parallel with the beach as well. The names were Del Playa, Sabado Tarde, Trigo, and Pasado. The "Del" of Del Playa was ungrammatical, but it clearly meant The Beach or To The Beach. Sabado Tarde and Trigo, meaning Saturday Afternoon and Wheat, were both fine although a strange juxtaposition. Pasado was the oddest one. Pasada would have meant passage, but the "o" at the end changed the meaning to overripe or spoiled. Nevertheless, the mood that the subdivision tried to convey was clearly Spanish/Mediterranean an the Board of Supervisors approved and accepted it in November of 1925." (15)

(Note that "pasado" can also mean "past", although it could have made more sense to say "El Pasado" if that were the intent.)

"Just three months later the strip of land between the Isla Vista tract and the Bishop Company's land was subdivided. Two Santa Barbara attorneys who had formerly worked out of the same suite of downtown offices headed up this venture. Alfred W. Robinson and James R. Thompson followed the Ilharreguys' lead and divided the beach front lots in two sections of twenty-five foot wide lots for oil leases. The land that stretched inland from the oil lots was divided into fifty by one hundred foot residential lots, also like the Isla Vista tract. Robertson and Thompson built three long roads that ran between the beachfront and the access road, two of which joined in a loop near the ocean. The area inside the loop they set aside for an athletic park. They extended the four parallel streets from the Isla Vista subdivision onto their own, changing the name of the unfortunate Pasado Road to Sevilla." (15-16)

"The Santa Barbara attorneys gave long names to the long roads that met in a loop, Embarcadero Del Mar and Embarcadero Del Norte. Translated, these became Ocean Wharf and North Wharf. The streets that crossed them were named after Spanish cities and Spanish artists." (16-17) 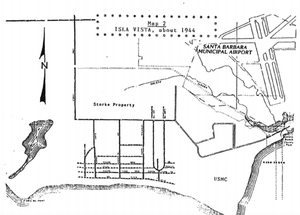 "The street and lot plans remained on the county books despite the commercial dormancy of the Isla Vista subdivisions and the lack of physical development in the area. Yet in the early 1940s, Isla Vista looked very much as if it had never been subdivided. Instead of a charming but profitable village, Isla Vista was a place where goats wandered, roosters crowed, and an occasional old truck bumped in along the dirt road with the week's supply of water. A few of these roads had been added since the 1920s and were mostly located in the Isla Vista subdivision. They ran parallel to the beachfront but were located further back in the formerly "neglected" area of the subdivision." (21)