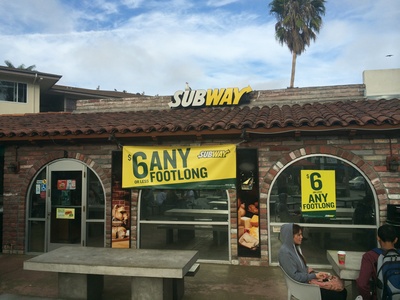 Subway is a national chain that sells sandwiches. You can call them to find out when cookies will be coming out of the oven if you really like fresh Subway cookies.

Even the most ordinary chain store in IV has a mildly surprising past! "Remembrance of Isla Vista Eateries Past" says "So have any of you ever wondered why the apartments behind Starbucks are called the “Taco Towers” by longtime locals? That’s because there used to be a Taco Bell where Subway currently is. Look at the architecture of the building front and it is a dead giveaway as to what used to be there." 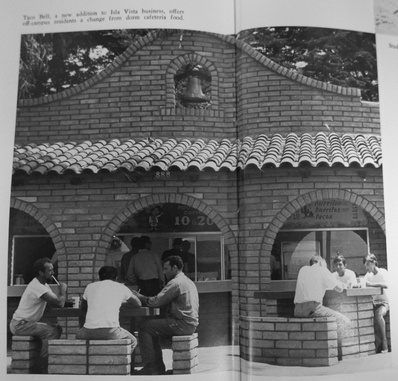 From the 1967 UCSB yearbook, in the UCSB library. The caption says "Taco Bell, a new addition to Isla Vista business, offers off-campus residents a change from dorm cafeteria food." Subway between Starbucks Coffee and The Habit, with the Taco Towers in the background. February 2015, by Britta Gustafson (CC BY-SA).

This Taco Bell opened in about 1967, when Mexican food was still a novelty for a lot of Americans - the Taco Bell menus had pronunciation guides for how to say burrito and taco. Freebirds World Burrito only opened in 1987.

From "The Underground Guide to the College of Your Choice" (1971): "Local hangs include "Borsodi's Coffee House," the "Taco Bell" (where to score) and the "Sun and Earth" (where the freaks hang)."

A post from 2007 says "In late Spring of 1984, the TB was torn down and replaced with a Subway sandwich shop, a (pre-Starbucks) coffee shop, an ice-cream store, and a Chinese restaurant that served dishes such as "Beef Isla Vista" and "Shrimp UCSB"."