As most UCSB students know, tanning is central to local Isla Vista culture. When the sun is out and the weather is hot, many grab their bathing suits and beach towels in the hopes of achieving a more bronzed look. This idea is one that is deeply rooted not only in Isla Vista culture, but also in American culture for many years.

Achieving a “tan” look first became popularized as something positive and desirable in the beginning of the 1900’s. Many acclaim Coco Chanel's return from vacation with a tan as an iconic moment and recognize it as the baptism of a “bronzed” and “glowy” tan as a symbol for “good health, great wealth, leisure time, social status, beauty and high fashion.” (Segrave 4). Others claim that the increasing attention and desire for a tan began in the 1890’s as part of a long existing global fad. (Segrave 5) Regardless of what the exact inspiration was to popularize tans, it is important to recognize that the beauty aesthetic many hoped to achieve through the act of “tanning” was and continues to be viewed differently from other tans achieved through labor tied to low socioeconomic status or when paired with distinguishably ethnic features. 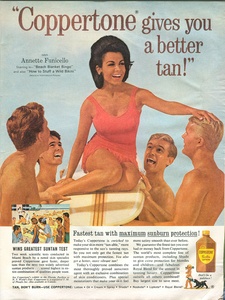 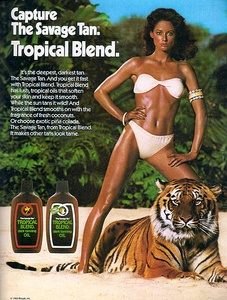 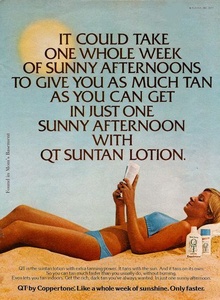 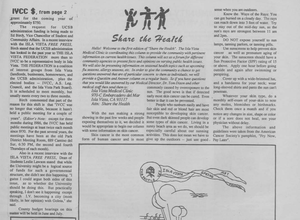 Fig. 4 An issue of the Isla Vista Free Press from 1987 reflects the rising caution in the 80's for long exposure to the sun without sunscreen. The column pertained to public health issues.

While the benefits and drawbacks of suntanning have been controversial and debated throughout the years, tanning was initially popularized on the basis that it was beneficial to one’s health. (Segrave 1)  From the 1950's on, perceptions about the sun and its benefits for human health shifted. Although many still believed the sun did have some benefits, new scientific research showed that exposing the skin to sun rays for too long may cause health issues such as cancer, stomach ulcers, kidney strain, etc.   The end of the 1970’s and beginning of the 80’s presented a highlight on the adverse of effects that sun exposure can have on skin and saw an approximate 4% boom in the sunscreen market. (Segrave 91). The emergence of sunscreen and sun-tanning lotion accompanied the spread of this new scientific information, and advertisements posed how some products could protect the skin from the suns rays as well as help one get a faster, natural tan (see Figures 1, 2, & 3) . Although the evidence surrounding sun damage still holds true today, it has not stopped IV residents from engaging in tanning whether it be on the beach, in their front yard, or at tanning salons. Each student interviewed as part of this study stated that they do know of the risks associated with skin cancer, but yet still continue to partake in the activity. This might be due to the fact that having a bronzed appearance is so integrated into the local culture and fashion that its risks simply are not enough to deter the residents.

"Surprisingly, increased risk awareness hasn’t had a substantial effect on counteracting teens’ allure to tanning beds. A common response from teens is that having a tan makes them feel confident. Some people feel that having a tan evens out their complexion or even makes them look thinner. A stop at the tanning salon often precedes a wedding, vacation, or a high school dance. Additionally, UV light causes endorphins to be released, so tanners leave feeling positive and healthy.” (The Bottom Line)

There have been a few tanning salons in IV:

And there are many more tanning salons in the greater Goleta and Santa Barbara area.

After interviewing experts Bianca Bavor (Unique Tanning) and Jamie Spovieri (The B Boutique), both indicated that the majority of their clients are female college students between the ages of 17-25. Jamie specifically mentioned that the most popular times of the year for spray tanning is "before Fall Rush, before Spring Quarter, and directly before Spring Break," however, they both have consistent business all year long. In IV, the constant warm weather and proximity to the beach means that there is a desire to be tan all the time, so many students will get tans year long.

Tanning is not unique to Isla Vista, but it is definitely integrated into the culture. Tanning in the Santa Barbara and Isla Vista area established itself as a local pastime as far back as the 1980’s. Tanning was so popular during this time that it was seen even seen in band names; a local, popular surf-punk band even named itself “The Tan” after it was created by a group of boys who often tanned together at the beaches here in Santa Barbara and in Mexico. Issue #6 of the Isla Vista Free Press from 1987 included a segment centered around Spring Break in Mazatlan. Throughout the segment are references to tanning related activities including tanning contests and "getting fried" by the pool.  Since most IV residents live within a mile of the beach, many often find themselves wanting to look tan in their bathing suits all year round. As one walks around IV, it is easy to spot students tanning in their front lawn, at the park, on the beach and even on the roof of their house. Interviews with UCSB students suggest that people tan because they believe they look better with a tan. One student said that she feels less attractive with her pale skin at the beach and feels more confident when tanned. Other students like to tan as it can be a relaxing social activity, where they can be in the company of their friends.

As many students are under a tight budget, many residents tan naturally under the sun. Tanning culture is so engrained into life in Santa Barbara that dorms such as Tropicana Gardens offer free tanning memberships to students. Regardless of the reasons for tanning, the proximity of the beach definitely adds to the prevalence of tanning in Isla Vista.