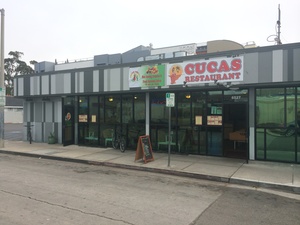 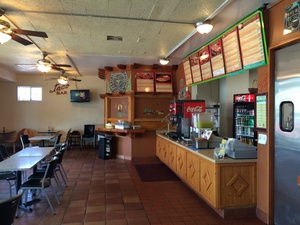 On the walls of the restaurant, there is an aerial photo of the IV/UCSB area in about 1961, along with a few photos of the former Super Cuca's location. The aerial photo is quite large and detailed, and it's very interesting to look at.

In April 2015. The lower left of the photo says "Mark Hurd Aerial Surveys, Inc. Santa Barbara, Calif. Minneapolis, Minn." An Edhat comment says they took photos of the whole county in 1961, and the UCSB Library has an archive of aerial photos by them. 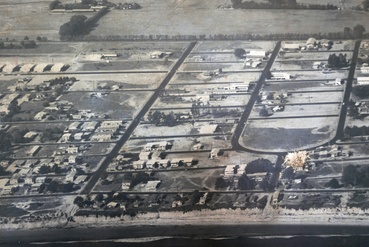 Detail from that photo showing the east side of IV. The former location is scratched out - maybe there used to be a sticker there? 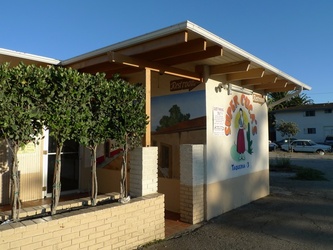 October 2011, by Britta Gustafson (CC BY-SA)They used to be at the end of the loop, but they took over the former location of Little Asia when the Loop and the Icon began construction in 2011. See The Loop for more photos, and see Lost Murals of Isla Vista for a larger view of the mural in their old building. There's a video of that Super Cucas building being demolished in October 2011.

That site had Isla Vista's first restaurant, Nebi's Coffee Shop, from 1959 to the early 1970s. The UCSB and IV Walking Tour says that the aerial photo came from the old Super Cuca's building, "On the north wall of the restaurant is an aerial photo of Isla Vista dating from about 1961, when Nebi’s opened for business."